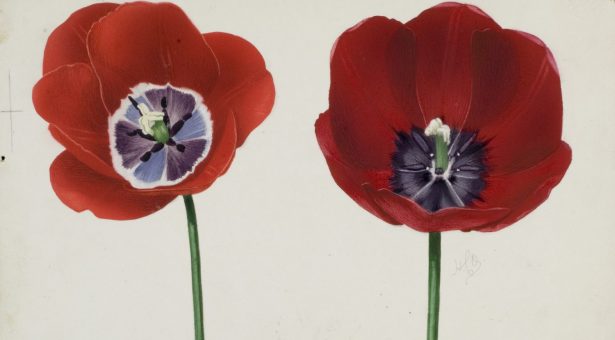 This week, to celebrate the beginning of spring, we have a special 3-part blog series telling the story of tulip research here at the John Innes Centre.

We begin in the early 20th Century, where librarian and historian Sarah Wilmot picks up the story.

“The John Innes Centre’s history with tulips begins with William Rickatson Dykes (1877-1925) and the collaboration he started with our first Director, William Bateson in the 1920s.

Dykes had recently retired after 16 years as Master of Charterhouse School, near Godalming in Surrey, where he’d made a name for himself as an expert on Irises. His magnum opus, ‘The Genus Iris’ was published in 1913, based on years spent in the great herbariums and botanic gardens of Europe, as well as patient study of his own collection and those of a network of correspondents.

While Rickatson was working away on irises he became interested in the new science of genetics. He hoped it might hold the answers to the puzzles he was facing when he tried to classify species.

With his book published, he decided to start a new project, this time on tulips. He came to live in Merton and had most of his fine collection of Crocus, Iris and Tulip bulbs planted in the gardens of the John Innes in 1920, becoming an official ‘Visiting Researcher’ there from 1920 to 1925.

Dykes was an active member of the Royal Horticultural Society and may have met Bateson on Society business. He became Secretary of the RHS in 1920, and by then had also joined the Genetical Society. This new Society had been founded in 1919 and at this date was still an intimate society, its scientific meetings dominated by John Innes staff and associates.

The early days of tulip studies at Merton were recorded by Dykes’ wife Katherine, who helped him by making drawings of many of the tulips.

With infinite patience, Dykes raised seedlings, lifted and stored the bulbs each year and planted them all again, carefully and methodically. Seeds were kept in very small tins, labelled and stored in a cabinet. The minutest bulbs were counted, kept in paper bags, and records were made. Everything was labelled and a book of reference was compiled and constantly in use. Dykes spent hours at the microscope and examined dried specimens from the various herbaria.

By bringing his collection to the John Innes, Dykes introduced Bateson to the challenges that variation in tulips presented, providing evidence that variation within the range of presumed ‘species’ was almost as great as that which in other instances would distinguish a species from another species. Bateson was hooked.

The arrival of Dykes’ collection sparked a flurry of work on tulips at the John Innes.

In 1922 Bateson began to investigate mutations in Murillo tulips. He wrote to E. H. Krelage of Haarlem, a specialist tulip grower, for information on mutations common in the trade and requesting some help identifying some of the interesting mutations in the collection at John Innes.

It appears he was planning to investigate pigment inheritance because he also wrote to his former student Muriel Wheldale, by now in the biochemistry department at Cambridge, for information on the biochemistry behind certain colour changes in tulips.

Frank Newton, the Institution’s new cytologist, was tasked with studying the chromosomes of ‘Tulipa’, using Dykes’ collection as his study material. Meanwhile, Ernest J. Collins, a John Innes botanist with some experience studying plant diseases, was asked to make the first (inconclusive) experiments to try and establish whether a plant virus was the cause of ‘breaking’ in tulips (this was at the suggestion of Bateson’s associate Daniel Hall).

Three deaths in a row

After a couple of years at Merton, Dykes moved his bulb collections away from the John Innes gardens, finding a new house in 1924 with two and a half acres of meadow land in Surrey.

There, he and Katherine designed and planned the garden and collected and planted everything (including his tulips) in it.

However, in 1925, when the garden was almost completed, Dykes died (his arm was amputated after a car accident, but he did not survive the surgery). A week after his death he was awarded the Victoria Medal of Honour of the RHS.

At John Innes, Bateson’s growing research on tulips was also brought to an abrupt end by his own sudden death in February 1926.

Frank Newton persuaded Katherine, who was maintaining the garden, to try and publish the notes that he and Dykes had been working on at John Innes. These related to classification and the chromosome numbers of tulips. Newton offered to help her do this, but in December 1927 he also tragically died. As Daniel Hall put it, ‘within a short space science lost the two men who were on their way to clear up the tulip problems’.

Together the two widows, Katherine Dykes and Lily Newton, helped each other with problems of tulip synonymy and classification and collaborated with Daniel Hall to prepare these notes for Dykes’ posthumously published volume ‘Notes on Tulip Species’. This was quite a task because Dykes had left nothing prepared for publication; it was all done from his card index and working notebooks.

The new Director of the John Innes, Daniel Hall began his interest in tulips as a gardener and lover of flowers. He’d heard with pleasure that Dykes was working on the genus, but knew little himself about tulip classification beyond being aware that there was confusion and doubt, that the status of the ‘Neo-Tulipae’ was uncertain, and that the evidence about habitats that would perhaps settle the debate about the origins of the garden tulip was lacking.

We don’t know when he first became interested in tulips, but it was sometime in the 1890s. His obituarist tells us that during all his time as an administrator he grew Tulips- at Wye College, at Rothamsted, and at the John Innes at Merton when he succeeded Bateson.

At some time between 1912 and 1922 Hall brought his own tulip collection to the John Innes gardens, which we know because we have his letter proposing to end this arrangement dated 1922. It seems he’d decided to move his tulips to his farm on the Hampshire border where he thought the soil and climate would suit them better and by 1924 the tulips were evidently established on the farm because the Genetical Society’s May meeting was held there, with tulips as one of the main features.

Hall, like Bateson, learnt from seeing Dykes’ tulips at Merton which had taught him some of the difficulties of tulip classification and the problems associated with identifying herbarium specimens.

It was a slow process, because Dykes had been raising the species from seed, both self-fertilised and cross-bred in order to see the constancy of the variations and their reliability for systematic conclusions. Hall stepped in to publish the records Dykes and Newton had produced, and then followed this up with his own volume ‘The Tulip’ in 1929.

In ‘The Tulip’ Hall presented material on the cultural as well as the scientific aspects of the flower, with separate histories given of the garden tulip and the English florists’ tulip. He pointed out that the name tulip first occurs in English in 1578, and that no representation can be found in pictures before the 16th century.

It was difficult to say when the ‘fancy’ for tulips began in Great Britain, but the early herbalists like John Gerard and John Parkinson show that many varieties of tulip were grown and admired very soon after their first appearance in Europe. The growth of interest in all aspects of gardening in England in the 18th century nurtured an already recognisable type: ‘the tulip enthusiast’.

The tulip collection at John Innes, Hall hoped, would be permanent and would maintain the continuity of records beyond his lifetime. (In fact, this wasn’t its fate, we no longer have a tulip collection and the National tulip collection was established at Cambridge University Botanic Garden in the 1940s).

One of the first things Hall did after his first tulip book was published, was to arrange for a tulip collecting expedition to Iraq and Iran through his contacts at the Royal Botanic Gardens at Kew.

The Director of Kew put him in touch with John MacQueen Cowan, a Scot who had spent his career in the Indian Forest Service, before being chosen as superintendent of the Royal Botanic Gardens in Calcutta, the chief botanical post of the Indian Empire. Cowan had recently retired from India and was helping out at Kew.

Hall also recruited young cytologist Cyril Darlington for the expedition. Hall did this, not just for Darlington’s scientific knowledge, but in part because Darlington had not been getting on with some of his colleagues and Hall thought it would be a good thing if he was sent out of the way.

Funded jointly by the Empire Marketing Board and the John Innes, Cowan and Darlington’s expedition began at Tilbury in February 1929, arriving at their first port of call, Port Said in March. From there they travelled overland in a Ford Lorry through Palestine to Babylonia (Iraq), en route to the mountainous back regions of Persia. Here they transferred to mules and were accompanied by two escorting soldiers.

Their job was to collect seeds of ‘Prunus’ (for the John Innes fruit collections) and bulbs of ‘Tulipa’ species. Cowan’s goal was to collect 5,000 specimens of plants in flower, to be dried and sent back to Kew. Though Darlington didn’t share Cowan’s zeal for plant collecting, the material they collected came to be essential for Darlington’s later famous chromosome studies (they have large chromosomes making them excellent experimental material).

Supplementing the work of Cowan and Darlington, Hall went on adding specimens to the John Innes collection of tulips over the next decade.

The collection now included specimens from a famous tulip growing firm in Haarlem which had long been the means of introducing most of the finest Asiatic tulips into European gardens, alongside tulips from the Hindu Kush, Kashmir, Cyprus, Crete, Palestine, Syria, Persia and Asia Minor, having enthusiastically taken to heart Dykes’ view that the taxonomy of ‘Tulipa’ could only be properly based on the examination of living specimens grown under comparable environmental conditions.

One important resource for Hall in this work was the resident John Innes artist Herbert Osterstock. In the days before colour photography, the services of an artist were the only way to record colour in flowers.

Osterstock contributed 40 colour illustrations to ‘The Genus Tulipa’, and as Hall acknowledged this was an outstanding contribution, in fact the ‘chief attraction of [his second] book’. The drawings aimed to be an exact reproduction, but in certain cases some artistic licence was granted so that the critical internal features of the flowers could be illustrated”.