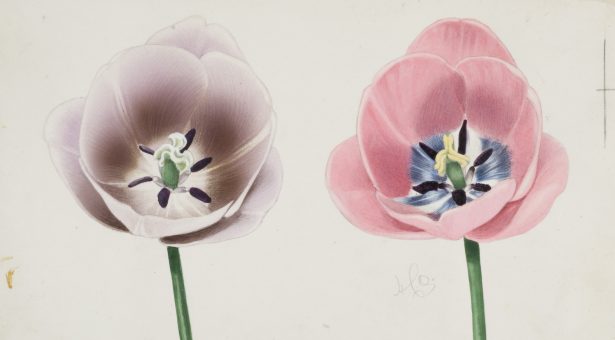 We conclude our spring into spring week looking at the history of research into the tulip, with the study of their chromosomes and the story of how they inspired one of modern day’s leading scientists.

Sarah Wilmot returns for Part 3. If you missed them, catch up with Part 1 – ‘Tulip research springs into life’ and Part 2 – ‘Why do tulips break?’

“Tulips inspired original research at the John Innes throughout the 1920s and 30s, but it was the passion of Dykes and Hall that provided the key stimulus. Their deaths marked the end of an era, but it was not to be quite the end of the story for John Innes researchers.

Decades later, when Professor Dame Caroline Dean was just starting out as a young research leader in California, she had what she described as a ‘bizarre experience’ when she started to plan what to do in her own lab. The answer came from some tulips:

Dean had wanted to have a few bulbs in her apartment, so bought some tulips, and the salesman said: “Now don’t forget to put them in the fridge for six weeks.” Of course, in England, you sow them in the ground between September and November but Caroline had never given a second thought to why you do this.

This conversation sparked Dean’s fascination with the requirement for prolonged cold for many plant processes: flower emergence in plants like tulips, breaking bud dormancy in trees, and vernalization in many plant species – including crops like cereals and brassicas – essentially how plants remember.

Decades after tulip research had moved away from the John Innes, these flowers inspired Dean to embark on what turned out to be a lifetime of research into the molecular biology of vernalization, winning her many scientific accolades”.