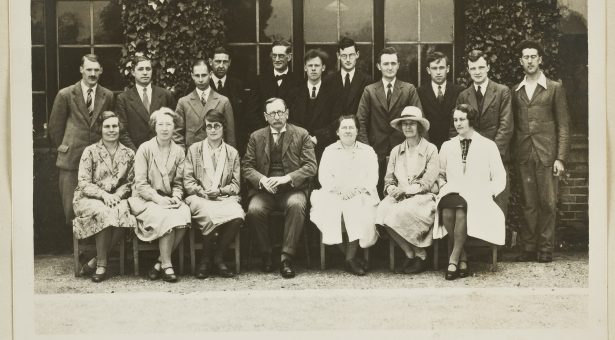 Following on from an earlier blog, “A history of women in science”, archivist Sarah Wilmot takes a look at the careers of two international women who worked at the John Innes Centre.

In the early twentieth century women researchers from overseas faced barriers to scientific research in the UK.

Here we focus on two women from Scandinavia who joined the John Innes Horticultural Institution (now Centre) in the 1920s:  Irma Andersson (later Andersson-Kottö) from Sweden, and Aslaug Sverdrup (later Sverdrup-Sømme) from Norway. Both played a significant role in the rejuvenation of the genetics programmes that had suffered the disruption of World War I.

As historian Marsha Richmond has discovered, to be able to offer Andersson and Sverdrup a position at the institute, the then Director William Bateson had to seek help from a contact. There were problems with income tax and customs laws, “as foreigners may not come into England to take up employment.”

Perhaps for this reason, Andersson, a graduate of Stockholm University, and Sverdrup, a zoology graduate from the University of Kristiania, first arrived at the institute as ‘volunteers’ (in 1919 and 1921, respectively). This was even though Sverdrup had held a university position in her home country (one of the first Norwegian women to do so) and Andersson came as a ‘stipendiary of the Swedish State.’

Sverdrup suffered interruptions in her studies, having to return to Norway for a time in 1921 and 1922 due to problems with British immigration rules. To compensate for this, she took seed back to Kristiania so that she could carry on some of her work in the new experimental grounds of the university there.

Andersson (1895-1985) began as a volunteer working on variegation in a brassica (Barbarea) and an unusual case of variegation in the maidenhair fern, Adiantum cuneatum. Bateson encouraged experiments on ferns because he recognised the value of a well-developed gametophyte generation for genetics work.

The fern work became a major project for Andersson, who evolved a technique for growing ferns on an artificial medium (1921).  Her innovation was to raise ferns from spores grown to begin with not in soil but in petri dishes of agar jelly moistened with a nutrient solution.

On the strength of this work, she was invited to join the British Pteridological Society (the fern society).

It is clear from the institute Annual Reports that Bateson was also excited by the potential her fern work was showing for the elucidation of somatic segregation (reduction in chromosome number in somatic plant cells). Her methods allowed accurate study of ‘cellular history’, something that in the 1920s was difficult to observe in higher plants.

Andersson’s value to the institute was recognised in her promotion to ‘Student’ in 1923, and the allocation to her of a specially adapted glasshouse for growing ferns in sterile conditions. Cyril Dean Darlington, who joined the institute in that year, paid Andersson the compliment of recognising her as an ‘independent’ researcher.

She shared a lab with the only other woman he thought merited that description, Dorothy Cayley, the institute’s mycologist. Darlington’s assessment is corroborated by J B S Haldane, part-time supervisor of genetics at the institute. He described Andersson in 1936 as ‘Very good and original, but difficult’; ‘Does not need or desire assistance’.

Andersson authored 11 scientific papers on ferns at the John Innes (nine as sole author) and gained her University of London PhD in 1934. Four years later she left the institute and returned to Sweden.

By this time her research with Alice Gairdner, a fellow member of the team, on the genetics and the cytology of ferns was widely recognised. She went on to a successful academic career, following her appointment to the staff of the Wenner-Gren Institut, Stockholm, where she worked on fungal genetics.

Today, here at the John Innes Centre, work on ferns continues in the Carella group who are working to better understand how the diversity of land plants defend against disease.

When Aslaug Sverdrup (1891-1955) first joined the John Innes Horticultural Institution, she was described by Darlington in his memoirs as a subordinate of Caroline Pellew, Bateson’s closest woman collaborator in his genetics programme. He placed her below the first rank of women researchers.

Was this assessment fair? It is true that Sverdrup was embarking on an apprenticeship to Pellew when she first arrived. She was, after all, a zoologist by training (her undergraduate thesis was on plankton in the Kristiana fjord).

In Norway she had worked with Professor Kristine Bonnevie who was founder of the ‘Department of Inheritance Research’, and holder of a newly established professorship at the Royal Frederick University, and first female member of the Norwegian Academy of Sciences (1911). Sverdrup’s post-degree project with Bonnevie had been on the occurrence of twins and of polydactylism in Norwegian families.

Indeed, her first publication in Journal of Genetics (1922) was a study of polydactylism in six generations of a Norwegian family. So, when she wrote to Bateson in 1921 asking to join the institute to work on the genetics of Primula sinensis (Chinese primrose), this was a change of direction.

Sverdrup’s stay at the institute was relatively short. She later returned to Norway in 1926 where she became a Lecturer in Genetics at the University of Oslo, gaining her PhD in 1931.

But Marsha Richmond’s work reveals that she played an important role in William Bateson’s research programme.

Trained by Bonnevie, Sverdrup was accomplished in cytology, the study of cells. Cytological skills were only just being introduced to the institute in the 1920s and Bateson valued her for her experience in this field because the science of heredity was becoming more dependent on expertise in it.

Also important to Bateson was the discovery that Sverdrup was familiar with the Drosophila (fruit fly) genetics of T H Morgan’s school at Columbia University, USA. Morgan’s chromosome theory of heredity rested on his team’s lab experiments with flies. Bateson was reluctant to accept Morgan’s work but needed to engage with it. He came to rely on Sverdrup’s knowledge of the subject, gained through her close friendship with Otto Mohr, a fellow Norwegian who had studied in Morgan’s lab.

It is clear from Bateson’s correspondence that she had assumed the unofficial role of tutor on Drosophila genetics for the institute staff. Historian Marsha Richmond has uncovered evidence that shows she was a major influence on Bateson’s eventual (partial) acceptance of the chromosome theory.

Her story is an object lesson in the need to test contemporary evaluations of women’s abilities against a close study of the archival evidence (remember Darlington’s dismissive description of her as a subordinate or dependent researcher).

I am grateful to Professor Marsha Richmond for her many articles on women in early genetics and for allowing me to see a draft chapter on the history of women geneticists at the John Innes Horticultural Institution. Quotations are from Marsha’s manuscript and Wilmot 2017.

Read more about the contribution of women to early genetics, both at John Innes and from an international perspective in Marsha Richmond’s forthcoming co-authored book (with Ida Stamhuis) Genes and Gender: Women in the Emergence of Genetics, 1900-1940, in preparation.

The book will include reflections on how the story of women at John Innes compares with that of women geneticists employed at other experimental institutes, including Cold Spring Harbor, New York, and Erwin Baur’s Institute for Heredity Research in Berlin.