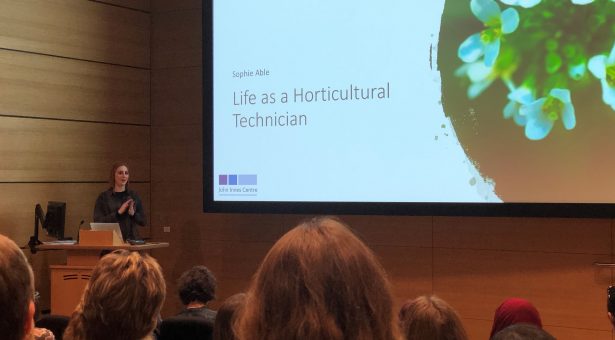 RITS 2019 was a collaborative effort between the Francis Crick Institute, Institute of Cancer Research, Wellcome Sanger Institute, Babraham Institute, Medical Research Council and ourselves, to focus on career planning for technicians.

We spoke to Dr Clare Stevenson, who leads the Technician Commitment for the John Innes Centre and was part of the organising committee for this conference

“At 5:45am in the bleak darkness of a cold winter morning, 13 of our technical staff (plus two from the Quadram Institute) set off for London. Pleasingly, we had a range of technicians attending including facility managers, facility staff, lab managers, research assistants and communications.

This was the first time that technicians from institutes have come together for this kind of event and it was great to see support from management in allowing technicians at all organisations time to reflect on their careers and development opportunities. By doing so, it is hoped we can create a climate in which an engaged and skilled technical workforce can flourish.

To that end, everyone attending RITS 2019 was encouraged to produce an A4 poster giving a little bit of information about themselves and their job which displayed throughout the day and helped promote networking in the breaks.

The event kicked off with an introduction from Sir Paul Nurse. It was great to hear from such a prominent person in the scientific community, that he himself came from a technical background and therefore valued the importance of technicians, both at The Crick, where he is now based and across science more generally.

Dr Cordelia Langford, Director of Scientific operations at the Wellcome Sanger Institute, spoke next about her career path so far. I found her talk very inspiring as she was not scared to admit where she had made mistakes. She stated that she was proud to be a technician and illustrated how career progression is rarely a straight line. It was also clear how proud and supportive of all the technical workforce she is, reflected in the fact that she stayed for the whole conference speaking to people and asking questions, highlighting her commitment and enthusiasm.

The other senior speaker was Professor Laura Bowater who is now academic director for innovation at the University of East Anglia. I personally know Laura well from the time she worked as a research technician at the John Innes Centre. After moving on from here, Laura’s career went from strength to strength but she highlighted how the skills she acquired are still useful in her senior role she has now. Her story is really inspiring as she has achieved so much thanks to her ‘can do’ attitude and taking every opportunity available.

For the rest of the morning, we were treated to talks from six technicians; one from each institute. Fatemeh Abolverdi and Tasnim Ali told us about their apprenticeship at the Crick, Jessica Podd about her work as an Animal Technician, Tatiana McHardy about her combined passions of chemistry and career development for technicians, Julie Roberts explained how she promotes open access sharing of resources and Peter Keen talked about being a Software Developer.

Sophie Able represented the John Innes Centre, speaking about her life as a Horticultural Technician.  We’d had a number of volunteers put themselves forward to speak, with Sophie earning her spot through an audition process. I don’t think she will mind me saying how she was a combination of nervous but delighted to get this opportunity.

Having not done too much public speaking previously, Sophie put a huge amount of effort (and probably sleepless nights) into preparing her talk, supported by James Piercy, Penny Hundleby and John Lord. I couldn’t have been prouder seeing her on stage, doing an amazing job. Giving someone the opportunity to present her work outside the institute and gain loads of confidence through the process of preparing it was one of the reasons this conference for technicians was something I really wanted to happen. She did an amazing job and think she might even have enjoyed it…

Having listened to talks through the morning, the afternoon was more interactive, perfect post-lunch.

First, Susie Edwards led a session on career planning. Her enthusiasm, passion and knowledge ensured everyone contributed. It certainly made me think about my own career, the skills I have but also the things that I require to have a productive but also enjoyable and satisfying time at work.

Then Steph Allen got us thinking about effective ways for increasing our networks and how best to maintain these. We worked in small groups around the networking posters and it was great to talk to technicians at other institutes. Steph suggested we should all reach out to each other and in the reception after her event I saw people putting the advice into practice. Since the conference several technicians have contacted me through LinkedIn and Twitter showing that, thanks to RITS 2019, new connections and communities are already being created.

We were also lucky to have Kelly Vere speak about the Technician Commitment and show many examples of all the positive things that have happened since the Technician Commitment was launched just over two years ago. Kelly’s talks are always inspiring, and it just shows what can be achieved with great leadership and everyone working together and learning from each other.

Finally, I would like to thank all the sponsors (but especially the Science Council, Gatsby and Technicians make it Happen) that enabled this conference to happen and the rest of the organising committee (David Hudson from The Crick, Ed Cannon and Burcu Bronner Anar from the Sanger Institute, Gabriela Ahmadi-Assalemi from MRC, Celia Monteiro Domingues from ICR and Danielle Hoyle from Babraham). We made a great team and I look forward to working with you again.”