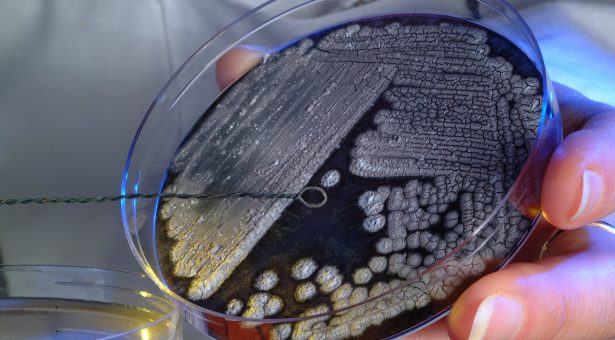 Every year at the John Innes Centre we hold an Annual Science Meeting, at which our researchers share what they’re working on with the rest of their research and technical colleagues.

One of the speakers at this year’s event was Dr Rebecca Devine, a Postdoc in the Professor Matt Hutchings lab.

Rebecca spoke about her work on using ants to find new antibiotics with such passion and insight, we wanted to share her work more broadly. Over to you Rebecca;

“I’m a postdoctoral researcher at the John Innes Centre, where my research focuses on finding new antibiotics.

Antibiotic-producing bacteria can be found in lots of places, like deserts, oceans and even in association with some insects like leaf-cutter ants. We like to look in under-explored environments to find new strains of Streptomyces that make new antibiotics.

Lots of the antibiotics that we currently use are derived from the natural products of soil bacteria like Streptomyces species.

In the Hutchings lab, we are interested in finding new antibiotic-producing strains that will make new compounds for us to use in medicine.

This is important because, a lot of our current antibiotics are becoming less and less effective as pathogenic bacteria evolve resistance to them, so it’s becoming increasingly difficult to treat these resistant infections.

Without good antibiotics, there are many fundamental aspects of modern medicine that won’t be possible, not just treating infections but also things like major surgeries and chemotherapy. Therefore, it’s vital that we find new antibiotics that have activity against drug-resistant microorganisms.

At the moment, I’m working with a new bacteria called Streptomyces formicae that was isolated from the nest of a fungus-farming plant-ant called Tetraponera penzigi.

Although this new strain of Streptomyces is able to make lots of new antibiotics, some of them are not produced or are only produced in small amounts in the lab.

By studying how antibiotics are made by Streptomyces bacteria, we can learn how to switch on the production of new antibiotics in lots of different strains and hopefully isolate lots of new compounds with clinical potential.

We hope that some of these new compounds will be used in medicine to treat drug-resistant infections. To do this, we need to focus on finding compounds that have different mechanisms of action to currently used antibiotics and we need to make sure that antibiotic use is more regulated in future, so that wide-spread resistance doesn’t evolve to this second generation of medicines.

In order to develop these antibiotics further, we need to get the strain to make more of these compounds, so I study how the biosynthesis of antibiotics is regulated so that we can genetically alter the bacteria and increase compound production.

I have been at the John Innes Centre for just over a year, although I collaborated with groups here during my PhD so I’ve been associated with the institute for some time now.

I got my undergraduate degree in pharmacology from the University of Manchester in 2015 and technically graduated from my PhD in 2019, although I’m still waiting for the graduation ceremony thank to Covid…

I love being at the John Innes Centre because the support available to researchers is fantastic – we have experts in so many techniques and everyone is always happy to help train you in new things.

Growing up, I can’t say that I always wanted to be a scientist, mostly because I didn’t really know that being a scientist was a real career. I feel very lucky that I found my way here.

I was the first in my family to go to university so I didn’t know much about academia or scientific careers, but I enjoyed science at school and wanted to learn more about it.

For a long time, I was stuck trying to decide between doing music and science at university, but decided if I did a science degree I could keep my music as a hobby (which I did) and thought it might be harder to do it the other way around.

When looking at universities, a professor at an open day told me not to worry too much about a grand career plan, but to just focus on things that interest me. I still follow that advice today and just pursue things that I’m passionate about.

I’ve also been really fortunate to have several great mentors along the way and a very supportive husband who have all encouraged me to push myself and step out of my comfort zone when I need to.

Now I am a scientist, my favourite thing about it is that I am always learning, whether it be learning a new technique in the lab or learning about a new area of research from a paper or a talk. There’s always more to learn and everyone you meet is doing something interesting and has exciting things to tell you about. No two days are the same so it’s never dull.

It’s also great to be surrounded with leaders in your field – the John Innes Centre is known as the home of Streptomyces genetics, so I know that I’m in the best place for the research I do and have so much to learn from everyone here”.