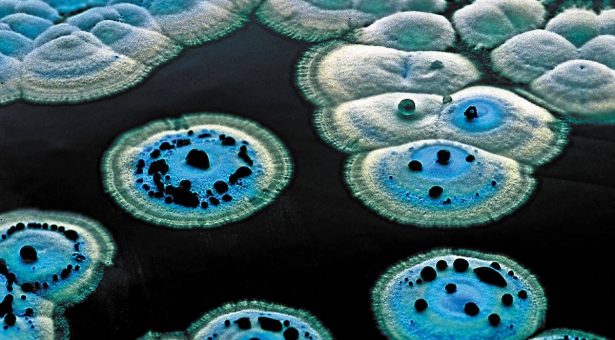 Imagine you’re a microbe, and you live in the soil. This is your happy place.

Most of the time you’re kept warm and dark, just as you like it. There’s food and oxygen for you and your microbe neighbours among the roots of the plants nearby. All of this in your tiny patch of dirt.

All the nutrients you need are here, produced by plants, other microbes and the decay of dead animal and plant matter. Everything seems perfect.

Unfortunately, the nutrients that you need are limited and there aren’t enough to go around. More bad news, you’re not necessarily the best at taking in the nutrients.

This means that while a clump of soil may seem like a perfect home, and rather innocuous to other animals. It is in fact a raging battleground for bacteria, struggling to stay alive and get the nutrients they need.

This is true of all the places bacteria call home, which covers a huge variety of environmental niches. From the soil in our gardens, to the leaves of plants, to the deep sea and even in our own intestines.

As a bacterium, you can’t co-exist peacefully with your neighbours. To survive you need an edge over the other microbes.

Luckily for you, evolution has given you that edge. Antibiotics.

Antibiotics are any substance which can act to inhibit the growth of, or kill, bacteria. Because of this, they have become vital to humans for combatting bacterial infection and are used to treat everything from bacterial gastroenteritis to bubonic plague.

During the “Golden Age” of antibiotic discovery, 70-80% of all discovered antibiotics came from a single genus of bacteria; Streptomyces.

For example, Streptomyces rapamycinicus, a bacterium isolated from soil on Easter Island, which is of particular interest to scientists because it has been shown to have the capacity to produce a variety of bioactive molecules; antibiotics (hygromycin). These help it to compete with faster growing bacteria in the soil; bialaphos which is a herbicide that causes plants to accumulate ammonium, which can then be used by the bacteria and finally, and most importantly, rapamycin.

Rapamycin acts as an anti-fungal compound against a variety of soil-dwelling fungi, allowing the Streptomyces to outcompete them. It is also an immunosuppressant and is used to prevent organ rejection following transplant surgery.

Now that we know that Streptomyces produce antibiotics, why do we care?

Antimicrobial resistance is one of the biggest problems facing humanity. Since the “Golden Age” of antibiotic discovery in the 1950s, the number of new antibiotics to be made commercially available has dropped precipitously, while overuse and misuse has led to the emergence of antibiotic resistant strains of bacteria, such as Methicillin Resistant Staphylococcus aureus (MRSA) and Vancomycin Resistance Enterococcus (VRE). To combat this problem, we need new antibiotics.

So, where are we going to get them from now?

One possibility is from the place we originally found them, the place they’ve been for millions of years; microbes.

Since the discovery of the first antibiotic, penicillin by Alexander Fleming, we have been using microbe’s weapons to combat disease. In recent years, a variety of different antibiotic producing bacteria have been found in all sorts of previously unexplored niches, such as the oceans and the nests of fungus farming ants.

Another approach could be protein engineering. If we can understand how the proteins that synthesise the antibiotics work, we can edit them to try and make brand new antibiotics.

Right now, in the Wilkinson group at the John Innes Centre, we are exploring both of those avenues, in an attempt to find the next generation of antibiotics.