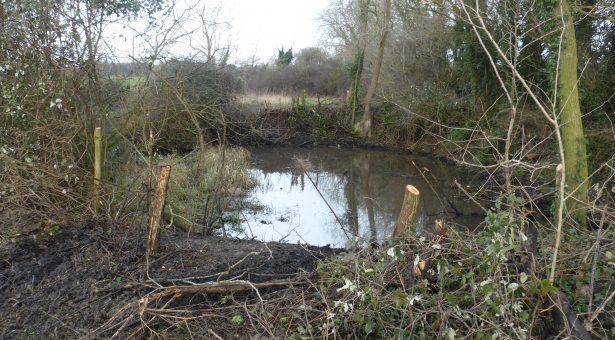 In March of 2020 work began on the restoration of neglected and rather sad-looking ponds at our Dorothea de Winton Field Experimentation site.

We spoke to Professor Allan Downie about what was being done.

“The pond rewilding plan came about because Anne Edwards, James Brown and I were looking for locations to propagate ash seedlings that were likely to be resistant to ash-dieback disease.

In February 2020, Anne and I went up to the farm to look at the field with Darryl, and found a very soggy small field, not great for crops but ideal for planting ash seedlings. This field was flanked on one side by two established ponds and Anne and I thought the ponds were in desperate need of restoration; Darryl was delighted with that idea.

Norfolk has many such ponds, often created 100-400 years ago by the extraction of marl (lime rich clay) for soil improvement or for clay to be used in building , as clay lump or fired to produce bricks and tiles. These marl pits became ponds, that acted as sites of great biodiversity, attracting insects, amphibians, birds and animals. The ponds at Church Farm probably date from the mid-19th century as they do not appear on the c.1840 tithe map but are present the first Ordnance Survey map of 1894.

As land use changed, these ponds became run-down and overgrown with trees and bushes. The resulting exclusion of sunlight caused ponds to become stagnant, because oxygenating water plants were unable to grow well and so the biodiversity greatly decreased over time. Leaf fall from the dense undergrowth resulted in the ponds becoming more shallow and so more likely to dry up.

Hope was at hand via the Norfolk Ponds Project, which was formed in 2014 with the aim of rejuvenating such ponds, alongside scientists at UEA and University College London who have documented dramatic increases in biodiversity in ponds after they have been opened up to light and dredged to remove the centuries of accumulated silt and debris.

Anne knew Andy Hind who was coordinating restoration in the Norfolk Ponds Project, so asked him to visit the Church Farm ponds that week. Andy felt they were ideal for restoration and gave a quotation to cut out overhanging bushes and trees and to get in ‘Dom the Dig’ with his specialised long-arm digger to dredge the ponds and drag out the fallen trees.

Fast action was needed, because pond restoration stops in early March to avoid disturbing breeding wildlife. So, if ash trees were to be planted, opening up and dredging the ponds would have to be done first.

It just so happened that I was meeting with Peter Innes, Chairman of the trustees of the John Innes Foundation on the last Friday of February, so I chanced my arm and asked if the Foundation would consider funding the first part of this pond restoration. Peter generously gave an immediate go-ahead, and the following Monday restoration work started. The first phase of the work, involving heavy machinery was completed within a week.

During the work, Andy realised that a small waterlogged area on the site (and not planned for pond restoration because it was shallow and dries out) met the criteria set by Norfolk County Council for creating new great-crested newt habitats under a Natural England grant. Appropriate permission was obtained and this was established as a new pond habitat under that initiative (at no extra cost to either the John Innes Centre or the John Innes Foundation).

In the future, more work will be needed to help to clean-up the site, to build ecological niches to help attract wildlife and, over time, to maintain the pond site by cutting back bushes.

It is hoped that volunteer groups will come from the John Innes Centre and further afield to help with such work starting in summer, once the field has dried out and the wildlife breeding season has finished.

For now, nature will take its course; experience with other ponds indicates dramatic improvements in the pond biodiversity can occur within a year and that bird diversity increases within a couple of years. Increased biodiversity is something that some of you might be interested in helping document in the next couple of years, so we will be looking for volunteers to help with that as well as helping rewild the area around the ponds.