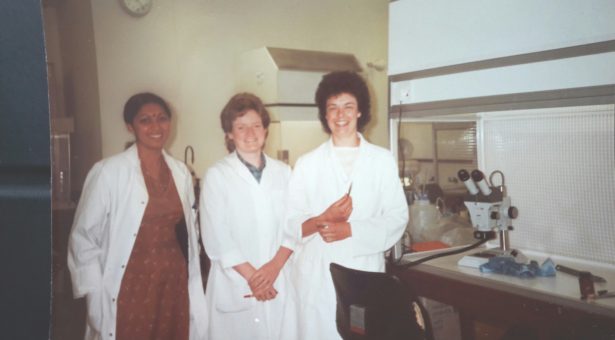 Earlier this year, a newly discovered single-cell microbe that can survive in extreme environments was named after Dr Renu Swarup, current Secretary in the Indian government’s Department of Biotechnology and former John Innes Centre Postdoctoral Scientist.

The microbe, which was discovered by scientists at the National Centre for Cell Science in Pune and NIIT University in Neemrana, was isolated from Sambhar Lake in Rajasthan and has been named Natrialba Swarupiae.

Renu did her PhD in genetics and plant breeding, before embarking on a Postdoc position in the Professor Roy Davies lab here at the John Innes Centre, before returning to India in 1989 and joining the Department of Biotechnology, initially as a Science Manager, remaining in the department for the next three decades, before her appointment as Secretary in 2018.

Quoted in ‘ThePrint’ researchers explained that they named the microbe after Renu to recognise her support in microbial diversity studies in India, including the establishment of India’s National Centre for Microbial Resource.

We spoke to two of Renu’s friends and former colleagues, Professor Wendy Harwood and Caroline Smith about her remarkable career.

“I had just finished my PhD when Renu joined us. I remember she was a real hands-on scientist working on tree tissue culture in Roy’s lab” begins Wendy.

“That’s right, she was working on silver birch. In fact, we still have a silver birch tree growing in my mother’s back garden that came from one of Renu’s tissue cultures” confirms Caroline, who has just completed a project in the Professor Mike Bevan lab and is looking for her next Research Assistant role.

“I visited Renu and she showed me her collection of tree tissue cultures. They started off in petri-dishes, then graduated into larger pots. When Renu left to go back to India there were a couple of these silver birch trees in pots, so I asked if I could take one. I tended to it in the lab for a while then transported it down to my mum’s garden, where it has thrived. 30 years on, it’s an impressive looking tree”.

Wendy, who now heads up our Crop Transformation team goes on; “Tissue culture work was just starting to get off the ground back then, helped by people like Renu. It fell out of fashion a little bit but is now back at the forefront of scientific advancements, because if you want to do any crop transformation or genome editing work, you need to do the tissue culture work people like Renu set-up and pushed forward.”

“When Renu joined our lab, she was new to England and I was new to the lab and we just hit it off straight away. I took her to Clacton one weekend to meet my mum, while she used me to try out some cooking. I remember when she arrived, she hadn’t done much cooking before, so she experimented a bit on me. Despite coming from really different backgrounds, we were really similar and a friendship that lasts to this day was formed” explains Caroline.

“I knew Renu was an excellent scientist and a hard worker, but she is also very modest, so I never realised that she would go on to be as brilliant as she has” she adds.

As part of her new role, in January 2020, Renu’s team at the Department of Biotechnology organised a Women in STEM conference, focussing on female scientists, engineers and entrepreneurs, in New Delhi.

“There were 400+ people there and it was really inspiring to see so many women making huge strides in STEM areas” said Wendy, who was one of the keynote speakers. “My talk was ‘From farm to lab and back again’. I come from a farming background and was the first person in my family to go to university, so I wanted to talk about the GM story and how the work we do on GM and genome editing  in the lab has an ultimate aim of getting those crops grown commercially back out in the field. I think it went down OK.”

“India are quite advanced with gene editing technologies and the Department of Biotechnology have recently published a draft document on the regulation of genome edited organisms. I was impressed with the work they are doing and taking a fresh look at the evidence. They recognise the potential for what could be a vital technology to both produce more food and protect the environment, which I think Renu deserves a lot of credit for.”

We gave the final word to Renu, who added; “This brings back lovely memories of my time at the John Innes Centre. It was lovely to meet Wendy recently and it has been really very nice of the researchers, their very kind gesture of means a lot to me.”

All images kindly supplied by Caroline Smith and Renu Swarup.