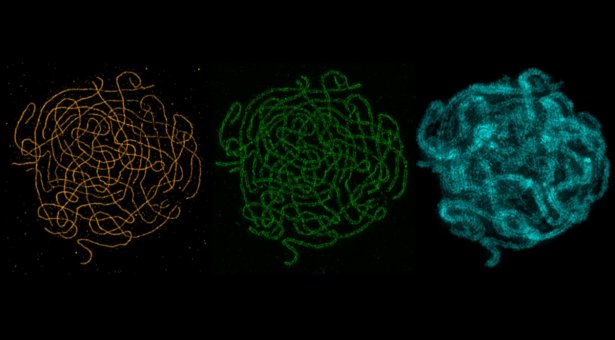 As a plant and microbial research institute, we have hundreds of biologists on-site and it struck us that while almost all of them had a biology career, none of those careers looked the same.

So, we sat down with four of them; a Group Leader, two PhD students and a Research Support Specialist, to ask them how they got into biology, what their career had looked like so far and what their future’s hold.

“I do not remember a time of my life in which I was not fascinated by nature, in all its shapes and forms.

Since early age, my grandmother instilled in me her passion for plants: despite being born and raised up in a big city like Rome, I remember growing every sort of plant on my window sill, often starting from seeds, watching them transforming day by day, and taking good care of them.

At high school, I was so lucky to have an outstanding biology teacher who was so passionate about life sciences, and made every possible effort to deliver exceptional classes. It was during that time when I looked under the microscope for the first time in my life, and ultimately decided that biology going to be part of my future.

I chose to study Biology at the University of Rome ‘Sapienza’ where I earned a B.Sc. and M.Sc. before embarking on a PhD in Genetics and Molecular Biology.

Studying biology can lead to many interesting and rewarding career paths, and potentially focus on several, diverse disciplines. It is therefore important to understand your own passions in order to make your studies, and eventually your working-life, suit your own interests.

I became utterly fascinated by developmental biology: I remember learning about so many different strategies that transform a small set of cells (sometimes just one) to complex, harmoniously shaped, multicellular organisms. For that reason, I decided to focus my lab placements, and subsequently my PhD thesis, studying plant development.

Since 2005, when I became member of a lab for the first time, I have never regretted my choice, and have been enjoying the curiosity-driven process that underpins fundamental research ever since.

After two years of post-doctoral training in Italy during which we made several important discoveries, I decided to move abroad to broaden my horizons and pursue my career aspirations.

I joined one of the best institutes for plant sciences in Europe, the John Innes Centre, where thanks to a prestigious Royal Society University Research Fellowship and the support of my institute, I was finally able to start my own independent group in 2019. My group is looking at the genetic and molecular mechanisms important for symmetry establishment during organ development.

I have been very fortunate to have met great teachers and mentors during my path, who have inspired me, let me explore my own interests, and believe in myself.

Now that my role includes mentoring young scientists, I recognise there is another side of the coin: It is extremely rewarding and inspiring to contribute to the students’ intellectual growth and helping them to flourish on their own right.

I would recommend every student to hold that very precious enthusiasm and curiosity with them throughout their career, and make sure to join a team in which their potential and passion is valued and well channelled”.

“I first became interested in biology around the age of seven when I read a book we had at home on how diets impact human health.

This interest was cemented during my biology A Level. Practical lessons in the lab were my favourite and the first time I ever looked at cells using a microscope was an experience that has stayed with me.

On completion of my A Levels, I eventually studied Agriculture at University. At first, I enrolled studying Geology. However, I was not entirely happy. Then, when I looked through the university prospectus, I was thrilled to see that the degree in Agriculture was developed to study the scientific side of agriculture such as genetics, microbiology, biochemistry and plant biology, so switched.

At the time my father and many of my friends felt I had made the wrong decision to leave Geology which would have given me a guaranteed career in a big mining company or given me the opportunity of starting my own lab, but it was the right decision for me and I don’t regret it.

Upon graduation I joined a start-up called Agri-biotech as an Agronomist for five years, where I produced disease-free planting material for sweet potato and cassava.

An NGO contracted us to promote the scaling up of the production of these alternative drought tolerant crops among rural farmers in Zimbabwe whose staple maize crops were failing due to climate change.

As much as I loved working in the lab, I was surprised to find out that I also enjoyed traveling and meeting with farmers who were growing plants I had developed in the lab. It was amazing to see how such technology greatly improved crop yields of the varieties that they used to grow due to elimination of viruses in these clonally propagated crops.

It was during my time at Agri-biotech that I got interested in pursuing a PhD abroad but it took a while to get the opportunity. In the meantime, I joined an NGO for seven years as a Programme Coordinator managing food security and livelihoods projects.

From there, I joined a private seed company as a Regional Variety Development officer for two years. I enjoyed joining the company as it was expanding into different countries in Southern Africa and got exposure to different roles within the company as they kept a lean office to reduce starting up costs.

As my career path has shown, biology is a very large and interesting field, especially if you keep an open mind about where you could end up.

My advice to anyone considering a biology career is to go out and get some work experience, it really brings to life what you study when you put it to work or helps your learning experience when you go for further studies.”

Ngoni is the recipient of a John Innes Centre Science for Africa studentship.

“I’ve always enjoyed being outside, growing up in rural Essex I was surrounded by plants and did a lot of gardening as a child.

My love for biology was sparked in a secondary school practical where we dug up decomposing pig’s heads in order to examine the maggots inside and estimate the time of death. I thought it was amazing that a seemingly difficult problem could be solved by looking at the stage of the maggots.

Since then I’ve moved away from such gruesome practical’s after discovering a love for plant biology through my undergraduate degree course, but I’ve held onto my enthusiasm for problem solving.

I studied for a BSc in Biological Sciences at UEA, focusing mainly on plant biology and genetics in my final year.

Alongside my undergraduate degree I got a job part-time at the John Innes Centre, working in Professor Alison Smith’s lab. While working in Alison’s lab I learnt many new practical techniques which helped build my confidence and only fuelled my enthusiasm for plant science.

After my undergraduate degree I studied for a Masters in Plant Genetics and Crop Improvement, jointly ran by the UEA and John Innes Centre. This course combined learning more about plant science and genetics with visits to plant breeding companies and helped me to decide that I wanted to pursue a career in research.

I’m working on understanding the control logic behind the vegetative-to-floral transition, which involves quite a lot of computational biology something I had little experience of prior to my PhD, as I have a pure biology background. That has been a theme of my PhD, which has allowed me to gain a host of new skills.

If you’re thinking of studying biology my advice would be, be open about what area of biology you want to study. There are so many areas of study within the field of biology, explore them and decide what you find the most interesting. If you enjoy something you’re already halfway there”.

“I’ve always been interested in biology, when I was little I used to like planting seeds. When I was at school I enjoyed studying the subject a lot, though I enjoyed lots of other subjects too, in particular languages. I also liked the idea of being a film director as I spent my summers making videos with friends on an old video camera.

This gave me a bit of a dilemma when it came to deciding which subject to focus on later on at school. I became increasingly aware that science is international, and that pursuing science wouldn’t cut off my opportunities in languages but it might be trickier the other way round.

I took part in a UNIQ summer school where I got the chance to experience what studying biology at university was like and I loved it, so my decision was made.

I enjoyed studying biology as it was so varied, from learning about the evolution of animal communication through to the molecular details of DNA. As well as developing my analytical ability, problem skills and writing, biology allowed my imagination to flourish. I found that I was particularly interested in plant evolution and immunity.

Alongside my time studying biology at university I kept up my interest in video making, filming documentaries and music videos.

Towards the end of my degree I was faced another dilemma, whether to continue along the traditional science path or pursue my interests in video making and media. A tutor pointed out to me that I’d be well suited to working in science communication where I could combine my interests – this was the first I’d heard of the area.

When I graduated, I was keen to gain more research experience but also explore science communication as a path, so I volunteered as part of the young communications team at the Norwich Science Festival and met Sarah Schmidt who was working in the 2Blades group at The Sainsbury Laboratory.

I was really interested in her work on fungal disease in banana and I asked if I could gain some lab experience which she kindly agreed to. I had a great time working with Sarah, and she was an inspiring communicator of her science too. Following this I gained a position as a pre–doc in Ksenia Krasileva’s group working on plant immunity, which I thoroughly enjoyed.

About halfway through my time in the lab I saw the advert for the role I’m now in, Communications Officer at the John Innes Centre. It was my dream job as they were particularly looking for someone to do video and design work in the team.

I was worried that I might not have enough experience, as I had never worked in a communications team before so decided to pluck up the courage, and as I was on the Norwich Research Park, speak to Felicity, Head of Communications and Engagement to see if it was worth applying. She encouraged me to apply, and I was delighted to have got job.

I feel incredibly lucky to have found a career that combines so many of my interests. I really enjoy learning new skills such as animation which helps make more fundamental science accessible to a wider audience.

My advice to anyone thinking of studying biology would be to go for it. I think it’s a good subject because as well as learning more analytical skills you also write more essays than other sciences so it gives you a wide transferable skillset that leaves many options open for a future careers.  It’s also really fun”.