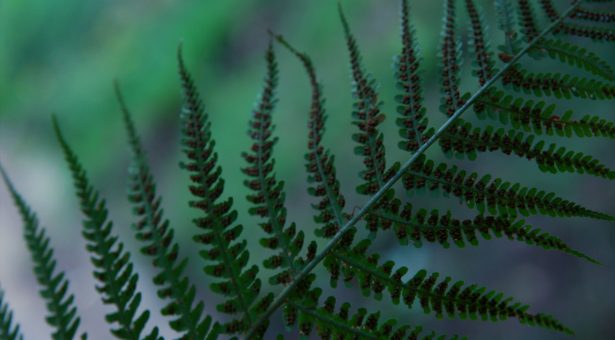 In July, Dippy the Dinosaur arrived in Norwich, taking up residence in the Cathedral and this special Diplodocus has got everyone thinking and talking about evolution.

As a plant and microbial research institute we thought we’d take a look at plant evolution and what kind of plants might have been around when Dippy walked the Earth.

Watch Communications Officer James Piercy and Postdoctoral Scientist Dr Beth Nichols as they take a journey back in time.

Most of the plants we see today belong to the group called the angiosperms.

The name comes from Greek meaning hidden seeds and refers to the defining features of this group which are flowers and the production of fruit. Angiosperms are an incredibly diverse group of plants that includes grasses, cereals, vegetables, grains and pretty much most plants you see.

The majority of the plants that our researchers study here at the John Innes Centre are angiosperms.

For example, one of our research groups, the Byers group focus particularly on the role of scent in the evolution of flowering plants.

Dippy the Diplodocus, would not have seen flowers because angiosperms evolved after Dippy. So, what would Dippy have seen or eaten? What came before angiosperms?

If we travel further back in time, we find the gymnosperms.

Like angiosperms, gymnosperms produce seeds. The difference is that their seeds are exposed, rather than being tucked away in fruit.

The name gymnosperm in Greek literally means ‘naked seeds’. Examples of these kinds of plants that we see today are conifers, cycads and gingkos.

Seeds haven’t always been around and before the evolution of angiosperms and gymnosperms, even further back in time, we find ferns. Instead of reproducing through seeds or flowers, these plants reproduce by spores.

Here at the John Innes Centre, one of our alumni, Dr Irma Andersson-Kottö who worked with us in the 1930s was a pioneer in fern genetics and developed a key concept in the evolution of plant development known as the alternation of generations.

Angiosperms, gymnosperms and ferns have a vascular system, which is a way of transporting water and minerals through tubes called xylem and phloem. However, the earliest plants that lived on land had not yet taken this evolutionary step which allowed plants to grow larger.

Today, we find a group of plants called the Bryophytes which lack such a vascular system and are the closest living relatives to the first plants to have evolved on land.

The group includes plants such as mosses, liverworts and hornworts. It is estimated that the very first plant life to evolve to live on land was over 450 million years ago.

Some of our researchers study mosses and liverworts to learn more about how traits that we see in plants have evolved over time.