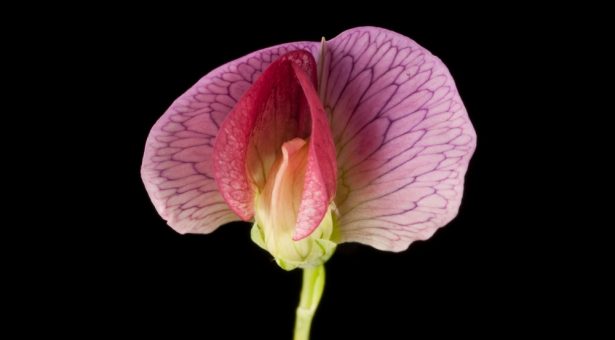 A team of our scientists, led by Noel Ellis, discovered the key to one of biology’s most famous experiments; identifying the gene controlling purple and white pea flowers.

Austrian monk Gregor Mendel, the ‘father of genetics’, had studied the same gene more than 150 years ago, following the segregation of seed coat colour in many of his crosses. He observed how purple flowers were associated with coloured seed coats and white flowers with colourless seed coats.

The genetic factors controlling flower colour were later defined as A, A2 and B, and researchers speculated that these genes were associated with anthocyanin production.

Anthocyanins are red-purple pigments that can be found in many plants; for example, they are responsible for the red colour of apple skins and red wine.

The purple colour of pea flowers can also be attributed to the accumulation of anthocyanins, whereas the white pea flowers lack these pigments.

Our scientists used fully sequenced genomes of model legumes such as Medicago – to identify candidates for the flower colour genes A and A2.

They then used a combination of genetic mapping, fast neutron mutant analysis, allelic diversity, transcript quantification, and transient expression complementation studies to confirm the precise location of the A and A2 genes.

They found that the A gene encodes a transcription factor – a protein– which controls anthocyanin synthesis and hence produces purple flowers and coloured seed coats.

They also identified a mutation (a) which produces white flowered pea lines. This mutant fails to manufacture the transcription factor and hence anthocyanin production is interrupted so the flowers appear white and the seed coats are not pigmented.

Mendel requested that all his scientific materials be destroyed upon his death, but the team here are confident that Mendel studied the A/a gene, since this was the most prevalent variety available in Europe during Mendel’s time. This is the fourth of Mendel’s seven pea genes to be cloned and characterised and the second at the John Innes Centre.

In 2012, we published a further paper that detailed the factors controlling pink pea flowers.

We found that another gene which controls flower colour – B – encodes an enzyme which is directly involved in anthocyanin biosynthesis.

Recessive b mutants cannot produce this enzyme; hence the flowers lack two major anthocyanins and exhibit a pink appearance instead of purple.

Why colour is important

Colour is a very important commercial quality, particularly for flowers, fruits and vegetables, and not just for cosmetic reasons.

The majority of commercial pea cultivars are white-flowered (a) because their seed coats lack pigments such as anthocyanins, tannins and phenolics which can lead to a bitter taste, making them less palatable.

Conversely, despite their negative attributes, anthocyanins have grown in interest among food product manufacturers and consumers, since it has been discovered that a colourful diet is associated with a range of beneficial antioxidant properties.

The characterisation of pea genes involved in pigmentation has been valuable for comparative legume genomics, as well as for increasing the understanding of anthocyanin biosynthesis and its potential applications.