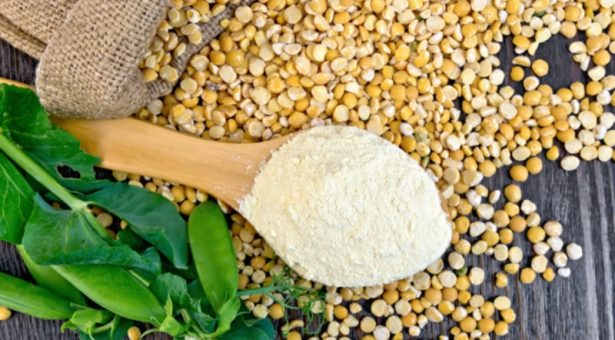 Pea seeds offer copious benefits to humans; they are extremely nutritious and can contribute towards reducing the risk of chronic diseases like cancer and diabetes.

However, despite the myriad of health benefits on offer, products derived from pea seeds remain under exploited.

One hindrance to their consumer acceptability is the detection of ‘off’ flavours and odours in pea products. These ‘grassy’ or ‘beany’ flavours are generated through the action of a group of enzymes called ‘lipoxygenases’.

Lipoxygenases (LOX) are a class of iron-containing enzymes that oxidise polyunsaturated fatty acids to produce a variety of chemicals.

Ubiquitous in animals, fungi and plants, they play a role in the interaction of plants with pathogens, insects, and abiotic stresses. But LOX can also negatively influence the taste and smell of certain foods by producing various aldehydes and alcohols.

The John Innes Institute first began investigating pea lipoxygenases during the late 1980s, when frozen peas rose to the top of the crops as sales of freezers, microwaves, cling film and Tupperware increased.

Our scientists were working on the improvement of pea seed constituents when Professor Claire Domoney made a serendipitous discovery. Domoney found that an abundant seed protein was in fact not a classical storage protein but an enzyme, and that the longest clone in her cDNA library encoded for this enzyme. The isolation of this clone was an important first step for investigating the molecular and commercial significance of LOX.

By the mid-1990s, the team predicted the complete amino acid sequences of the main pea LOX, mapped their genetic positions, and made comparisons with other known LOX sequences.

Casey and Domoney identified mutations affecting the amount of LOX in seeds, in particular a mutant line which lacked one pea seed LOX. By crossing this line, through standard plant breeding, and genetic analyses they showed that the mutation behaved as a single, recessive, Mendelian gene.

The new pea line, which did not produce the ‘off’ flavours caused by LOX, had the potential to be of commercial significance to the frozen pea industry, as well as in the production of pea protein isolates for use as meat substitutes.

The value for frozen seeds lay in the possibility that growers might be able to extend the time it takes to get the crop from ‘field to factory’, without the formation of ‘off’ flavours, a major reason why seeds are ‘blanched’ by heat before freezing.

Additionally, pea lines with reduced LOX are bland, which means that flavours can be added to pea protein to make it taste like pork or chicken. Therefore, it can be used as a ‘meat substitute’ in the production of meat-free products.

The commercial potential of this mutant pea was not realised at the time, but markets have since changed and there are new and emergent opportunities for pea-derived products, with a particular focus on the influence of LOX on flavours.

The biggest opportunity has appeared as an increasing number of people seek alternatives to wheat products; these include people with allergies, coeliacs, and those making lifestyle choices to eliminate wheat products.

For the gluten-free market, pea flour in particular offers a credible substitute to wheat and compared with other gluten-free flours it is very high in protein, fibre and vitamins. In addition, pea flour has the added benefit of being low in fat and having a low glycaemic index.

We have formed a strategic business relationship with ‘PeaWise Ltd’, who are based in Newmarket, and are working towards creating a local gluten-free supply chain for pea flour using UK-grown white peas.

Global research is also being conducted to increase the understanding of flavour compounds in pea, including LOX, so that flavour development can be controlled to improve the functionality of pea flour and related products.

The race is on to produce the perfect pea flour.