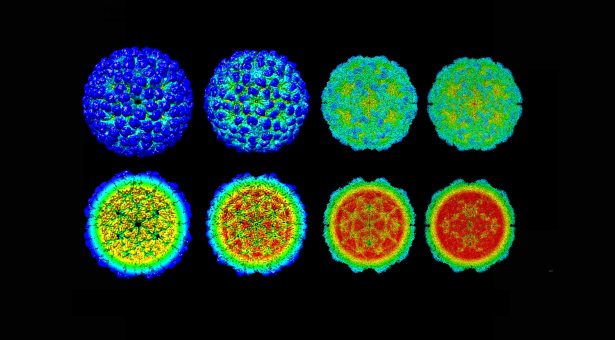 A critical process in the infection cycle of viruses has been revealed for the first time in dynamic detail using pioneering plant-based technology.

Evidence about the process of maturation revealed in the research could help us develop new methods for treating viral infections.

This transient expression technique uses Virus Like Particles (VLPs) which are mimics of the authentic virus. The capsid or protein coat of the virus is expressed by plant cells and the research team then analyses the purified material from infiltrated leaves.

The research demonstrated that maturation of procapsids – immature viral structures – can occur within plant cells to yield fully functional mature capsids. This has not been observed previously in the absence of a natural infection and is a new application for the transient expression system pioneered by Professor George Lomonossoff at the John Innes Centre.

Comparative cryo-EM analysis of the structures of the procapsids and mature capsids revealed the large structural rearrangements both within and between the protein subunits of the capsid that accompany maturation and create the conditions necessary for viral replication and infection.

Professor George Lomonossoff said: “Most structural studies of virus particles to date have given a static picture of the particles. By isolating particles from plants that are undergoing the process of maturation, we have managed to obtain a picture of the dynamics of an essential part of a virus infection cycle.”

Maturation plays a critical role for all animal and bacterial viruses studied to date and is required to produce infectious virions or particles. Though the outlines of the process have been determined for many groups of viruses, detailed mechanistic studies have not been reported.

The present study, a collaboration involving scientists at the University of Leeds and colleagues in Brazil and the USA reveals details of the structures at the beginning and the end of the maturation process. What is now required is an analysis of intermediate steps to get a complete understanding of the dynamics.

This will enable the research team to determine the 3-D structures of intermediates in the maturation process to create a “movie.”

“We have shown that maturation occurs over time within plant cells and that means we have discovered a valuable tool for studying virus maturation. We hope it will be of interest to potential collaborators and industry,” said Professor Lomonossoff.