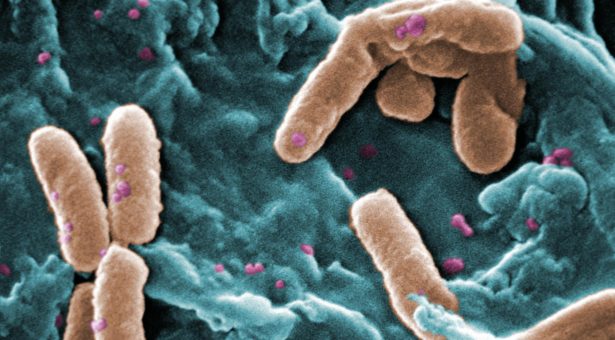 Research has identified critical factors that enable dangerous bacteria to spread disease by surviving on surfaces in hospitals and kitchens.

The study into the mechanisms which enable the opportunistic human pathogen Pseudomonas aeruginosa to survive on surfaces, could lead to new ways of targeting harmful bacteria.

To survive outside their host, pathogenic bacteria must withstand various environmental stresses. One mechanism is the sugar molecule, trehalose, which is associated with the response to a range of external stresses. Particularly osmotic shock, where sudden changes to the salt concentration occurs in surrounding cells.

Researchers at the John Innes Centre analysed how trehalose is metabolised by P. aeruginosa to define its role in protection against external stresses.

Experiments showed that disruption of either trehalose or glycogen pathways significantly reduced the ability of P. aeruginosa to survive on man-made surfaces such as kitchen or hospital counters.

The study found that while both trehalose and glycogen are important for stress tolerance in P. aeruginosa they counter distinct stresses: trehalose helps the bacteria to survive in conditions of elevated salt; glycogen contributes to survival in dry (desiccated) environments.

The findings raise the possibility of targeting the trehalose and glycogen pathways to limit pathogen survival on man-made surfaces.

“We have shown how a dangerous human pathogen Pseudomonas aeruginosa responds to environmental challenges, such as salt stress or drying out. Disrupting the production of certain stress-tolerance sugars in this bug significantly reduces its ability to survive on kitchen and hospital worksurfaces,” said corresponding author of the study Dr Jacob Malone.

An unexpected finding was how the bacteria operates different pathways for different stresses, said Dr Malone: “Conventional wisdom says that trehalose was responsible for both phenotypes, but we have shown that trehalose only protects against osmo-stress and glycogen is needed to protect against desiccation. We were also surprised to see such a marked drop in surface survival when we disrupted the pathways in the bugs.”

The next step for the research is to understand how trehalose and glycogen metabolic pathways are regulated in P. aeruginosa and closely related species. The group also wants to understand

how glycogen accumulation allows the bacteria to survive in dry environments and provide more explanation of how and when different parts of the pathways are turned on and off.

P. aeruginosa is a significant pathogen in animals as well as humans.

In humans it primarily affects immunocompromised individuals, where it is a major cause of pneumonia and hospital-acquired infections. Chronic P. aeruginosa infections occur in 80% of adult cystic fibrosis patients, where it is the primary cause of morbidity and mortality.