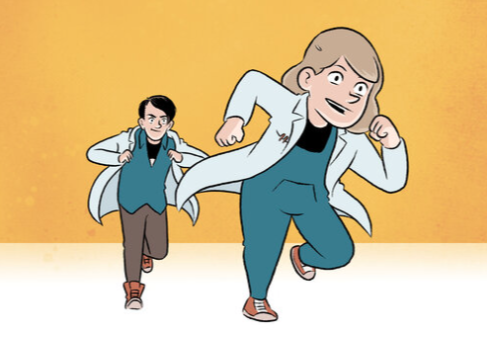 We have collaborated with a microbiologist at the University of Liverpool, who has co-written a comic book aiming to help young people aged 10 and above understand the wonder of microbes.

Dr Jamie Hall has co-written the comic with author and illustrator Edward Ross, with input from a team of scientists from the Universities of Liverpool, Manchester, York, Sheffield and Birmingham and the John Innes Centre.

Aimed at pupils at key stage 3 and above, Luna & Simon: Bizarre Bacteria and Peculiar Plasmids is available to download or print at home here. Readers can join Luna and her sulky brother Simon as they explore the wonderful world of microbes. Read about the diversity of bacterial life, and the strange ways in which microbes continue to evolve and change our world.

“Almost everywhere we look on planet Earth, we find microbes. There is incredible diversity and amazing adaptations evolving literally right under our noses. But we usually only hear about microbes when they are causing disease. I wanted to do science communication that would reveal the microbial world as a source of wonder and awe, rather than just a threat,” says Jamie.

“I hope readers will see how science thrives on imagination and creativity, just as much as it needs rigour and precision. Eddie and I have been collaborating on science comics for years, since I was a PhD student and he was writing his first book on cinema, and we’ve produced several comics about parasites and stem cells. This project was particularly fun to develop, because by putting the science in the hands of Luna and Simon, we had the freedom to be a bit more playful with some of our explanations.”

Edward Ross added: “Comics are a great way to reach new audiences with science. Exciting images catch the eye and fun stories draw readers in. With Luna and Simon we wanted to capture the adventure and imagination of comics like Calvin and Hobbes and The Phoenix Comic, while bringing some truly amazing science along for the ride.”

John Innes Centre Group Leader Jacob Malone said; “Plasmid exchange between bacteria; the process that we explain in this comic, is an exciting, fast moving field and is under active investigation in my lab. Collaborating with Jamie, Edward and the rest of the team on this project has been a fantastic experience. I hope it will help to explain the work we do, and why it is important, to a much wider audience.”

The creators of the comic hope to inspire key stage 3 students towards science GCSEs, but the themes covered in the comic are also relevant for further and higher education students. To access the comic and accompanying educational resources, visit the And The Microbes website.