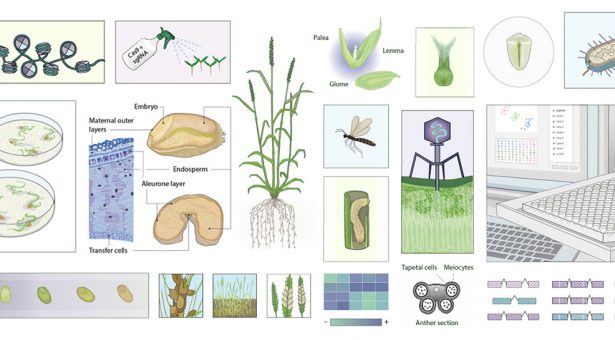 Tobin Florio is a Science Technician in the Professor Cristobal Uauy lab by day and an artist by night.

We caught up with him to ask how he is bringing these two passions together and providing scientific illustrations for published papers.

“It all started with art. It is in the blood. My grandparents were both artists, as are my brother and sister. It’s almost a need to be creative.

Early in my career, I worked for a few London based design companies, but I found the work too restrictive and the London lifestyle grew tiresome. I wanted to get back to painting and have a change of scene. So, I moved to Italy, set up a studio and spent a couple of years living through my art.

It was fantastic time, but I soon realised I needed to get a day job to pay the bills and that I’d have to draw or paint at every opportunity outside working hours. I’ve done that by working as a freelance illustrator and painting on commission.

My route into science was initially via my partner; who has been a Postdoc here at the John Innes Centre for almost a decade. One summer a temporary job came up to help out with field work here, so I thought I would give it a go. Six months became a year as I saw the crop cycle through, and then that got extended further and now years on, I’m still here and I’m enjoying it more every day.

I’ve been really lucky to have James Simmonds as a mentor teaching me how it all works. I’ve learnt so much. It is so refreshing to be in such a creative and curiosity driven environment, where you are surrounded by incredible people doing incredible things.

My role in the Uauy lab is mostly glasshouse and field based. I’m responsible for the crossing to make new lines, which is probably my favourite part of the job. In the summer I assist in the management of our group’s field trials, and I lead our team of summer casuals in the phenotyping and collection of a pretty impressive amount of material and data.

A few years ago, I did some scientific illustrations for some friends, which I think Cristobal saw. He then approached me and asked if I could do something for an upcoming paper and since then it has just taken off.

Now I am being approached all the time by people here at the John Innes Centre, as well as our collaborators further afield, to do pieces for papers and proposals. I have gone on to do work for scientists in Australia, Italy and Canada, it’s been great, and I am very much open for people to contact me about commissions they would like me to help them with.

I recently launched my new website which includes examples of my work in recent publications.

My science illustrations are very clean and crisp because they are depicting something very precise. Outside that, I have a style of painting which continues to grow with experience and varies in both method and subject matter”.