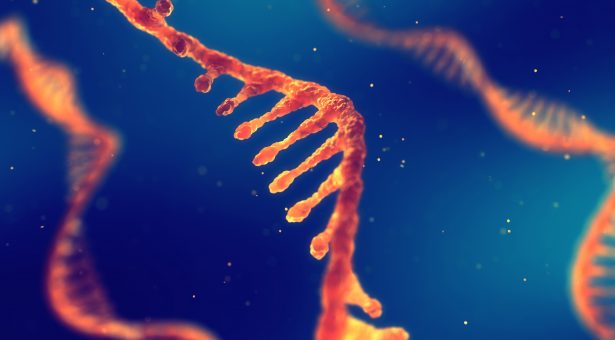 Research reveals how a newly discovered structural feature of RNA helps regulate gene activity and could be used to fine edit traits in crops.

The findings by researchers at the John Innes Centre add to our understanding of gene silencing and the emerging field of RNA therapy which has implications for animal and human health.

Dr Yiliang Ding, the corresponding author of the study which appears in Nucleic Acids Research, explains: “RNA is not a skinny molecule but has a toned structure – our fundamental discovery about the nature of this structure in living cells opens up exciting technological applications. Like the gene-editing tool CRISPR, it could be used to grow healthier and more sustainable crops. And though this work was carried out on plants, our findings may have important implications for improving RNA therapy in human health.”

Genes can be silenced by another type of RNA called microRNA (miRNA) which guides a protein called ARGONAUTE to the mRNA. This then cleaves the mRNA, so it is not made into a protein.

MiRNAs can be artificially developed to target diseases – for example, the viral RNA of crop pathogens or cancer cells in human treatments.

Previously, researchers predicted targets based on complementarity between miRNA and target RNA but this method produces considerable false positives.

It was suspected that the spatial structure of the mRNA may be significant – single-stranded RNA may be cleaved more easily than double-stranded, for example.

But in this study, researchers in the group of Dr Ding, found that the mRNA structure is not spatially accessible to miRNA. Instead it is the energetic accessibility – how easy it is to open the mRNA secondary structure – that determines whether an mRNA is cleaved by a miRNA.

They have also discovered that the single-strandedness of the two nucleotides immediately downstream of the mRNA target site, which they have named Target Adjacent Structure Motif (TAM), can promote miRNA cleavage. This is like the sequence feature PAM which is required for the gene editing tool CRISPR to cleave DNA.

In contrast to other studies, the group studied RNA in plants, rather than in test tubes. They used a new method which allowed them to capture the structures of intact mRNAs before they are cleaved.

Combining this with methods to measure how much the mRNAs are cleaved, and kinetics analysis allowed the group to discover this delicate “structural code” hidden in mRNAs.

Experiments showed that inserting the TAM structure into mRNA causes mRNA to be cleaved, validating their observations in plants.

Dr Ding adds: “Since our study was first made accessible to other researchers, we have been contacted by scientists doing miRNA study in animals and we have also started looking similar phenomena in the miRNA regulation in animals. We hope our insights into RNA “structural code” becomes a useful additional editing tool for researchers.”