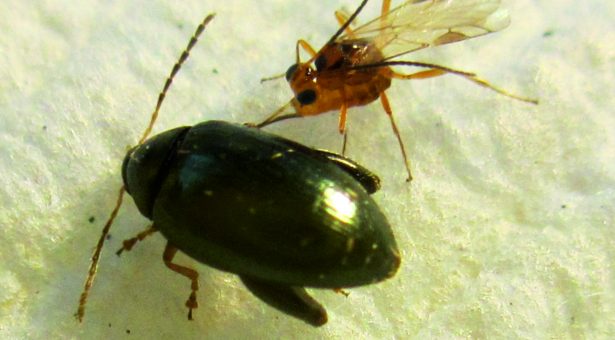 A species of parasitic wasp discovered by chance could provide farmers with a chemical-free way of controlling a major pest.

Researchers made the discovery when the wasps appeared mysteriously in colonies of cabbage stem flea beetles (CSFB) they were studying to test feeding preferences on oilseed rape.

The wasps appeared even though the beetles were confined to potted oilseed rape plants inside micro-perforated bags.

Further exploration revealed that the colonies of around 3,000 beetles collected from three sites around Norfolk had been infected by a parasitic wasp that lays eggs within the beetle’s body.

Genetic sequencing and enquiries by the Natural History Museum, UK, and the Swedish Museum of Natural History identified the wasp as an obscure species called Microctonus brassicae which was first reported in 2008 with no further identifications until now.

The study carried out by researchers at the John Innes Centre is the first English published description of this parasitoid of the adult CSFB.

Experiments showed that within controlled conditions the presence of wasps in sufficient numbers led to the collapse of CSFB colonies.

Beetle hosts are rendered sterile and die after the wasp larvae emerge from the body after passing through its digestive system. The short generation time of 43.5 days from egg to adult means it would be possible to rapidly rear multiple generations in controlled conditions.

The study raises the possibility of employing Microctonus Brassicae and other species of genetically similar parasitic wasps as a biocontrol to protect oilseed rape and a range of commercially important crops prone to attack by CSFB.

The beetle is a major threat to oilseed rape, particularly the winter crop, throughout the UK and Europe. It causes characteristic damage known as “shot-holing” to leaves often resulting in crop failure or poor crop establishment.

The beetle has become a prominent pest in the UK, particularly in East Anglia, and surrounding counties following the European ban on neonicotinoid seed treatment use in flowering crops.

The ban on these and other systemic pesticides followed research linking their use to decline in pollinators. Further legislation in 2019 upgraded the ban to include other broad-spectrum pesticides.

With the removal of seed treatments for oilseed rape the numbers of CSFB and the damage they cause have increased. Figures for 2014 value damage at £23million with an approximate loss of 3.5% of the national crop area of winter oilseed rape to CSFB.

The estimated best-case crop production for 2020/21 is 1.26 million tonnes, a year on year decline of 489,000 tonnes, putting the future of the valuable UK rapeseed crop in doubt.

Using beneficial insects for biocontrol has been investigated in the past with five species of parasitoid wasps found to target CSFB. But these have demonstrated limited effectiveness and found to be economically unnecessary while the now banned pesticides were in use.

Under captivity in this study M. brassicae the rate of parasitism was greater than 44%. The research suggests that the wasp may have the potential to deliver positive effects under field conditions.

Further research has been performed by Rothamsted Research to look at wasp presence and parasitism levels across the UK. Agricultural practices such as promotion of field margins, beetle banks and conservation headland may provide habitats to support the beneficial parasitoids.

“Something that was initially very annoying leading to the collapse of our research colonies has turned out to be fortunate,” says lead author Dr Rachel Wells of the John Innes Centre.  “It offers the possibility of using parasitoid wasps as bio-controls and more sustainable pest management practices for farmers and growers of oilseed rape and brassica vegetables against cabbage stem flea beetle as part of an integrated pest management approach”.

The research: ‘The potential of the solitary parasitoid Microtonus brassicae for the biological control of the adult cabbage stem flea beetle‘, Psylliodes chrysocephala is in the journal Entomologia Experimentalis et Applicata.