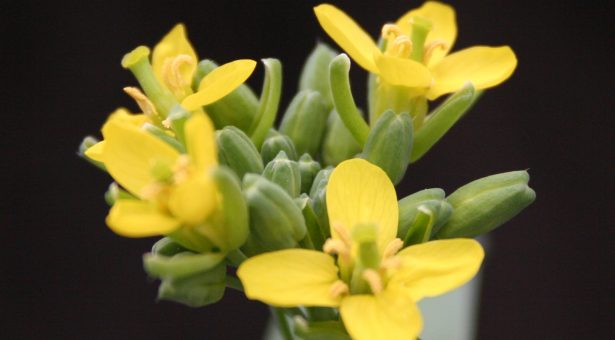 Research into the important adaptive and agronomic trait of flowering time has uncovered new evidence on differences between commercial varieties of Brassica rapa and closely related model plants.

To understand the mechanistic basis for why some varieties of the same crop flower earlier than others the researchers compared transcriptomic dynamics – patterns in expression of genes – throughout the development of Arabidopsis and the related widely cultivated mustard oil crop, B. rapa.

A further motivation for the study was to discover how far knowledge of Arabidopsis gene networks could be translated into the crop.

Using machine learning approaches and by measuring gene expression at different time points, the John Innes Centre team identified key differences in the genetic regulation of flowering time between Arabidopsis and rapid-cycling variants of B. rapa.

Given the evolutionary history of B. rapa, its relatedness to Arabidopsis and the fact that the model and commercial crop look similar through developmental stages, the team suspected that development would be similar, albeit progressing at different rates. But this was not the case.

“To our surprise we found that at no single point in time is the transcriptome state between Arabidopsis and Brassica rapa similar,” said lead author Dr Alex Calderwood. “However, patterns of gene expression between species were very similar. This allowed us to computationally rescale gene expression across time to allow comparisons between species.”

One of the B. rapa lines within the study was a cultivar from a research partner at the Bangladesh Agricultural Research Institute (BARI). This line has been specifically bred for Bangladeshi farmers to be very rapid flowering allowing it to fit into their tight rice, B. rapa mustard oil crop rotation.

Key differences observed in gene expression within this line highlight changes in the gene regulatory network that may be brought about by selection for crop cultivation or environmental adaptation.

“We have gained a mechanistic understanding into why plants have different flowering times and how gene regulatory networks may be rewired during crop selection or adaptation,” said Dr Calderwood.

Now the researchers are investigating how consistent these findings are across the different Brassica crops and how the underlying gene networks controlling flowering may differ between species and crop types.

This knowledge will support the development of a predictive model for flowering based on genetic differences which may then be used to inform crop breeding strategies.

“Flowering time shows great variability between different Brassica species and cultivars. Our analyses and suggested mechanisms provide an explanation for how this plasticity within a species may arise,” said corresponding author Prof Richard Morris.