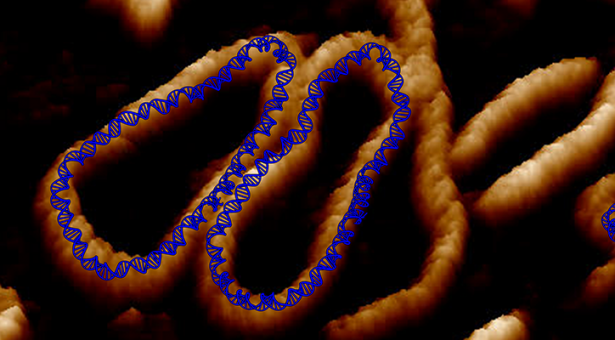 Using advanced atomic force microscope technology and a supercomputer, the research team from the Universities of Leeds, Sheffield, York, Liverpool, UCL, Birkbeck University of London and the John Innes Centre revealed that twisted DNA can develop kinks and creases that help to package it into compact shapes

Getting a DNA molecule into a cell involves a process of folding called supercoiling, where the DNA is twisted and looped.

The researchers believe their technique for visualising how DNA can compact so tightly will accelerate the development of new forms of gene therapy where diseases can be prevented or cured by because these very small circles of DNA can squeeze into cells more easily.

The minicircles are special because the molecule is joined at both ends to form a loop, which can be supercoiled, mimicking the DNA in living organisms.

The traditional view of DNA is a molecule shaped in the form of a double helix. But DNA is such an enormously long molecule, nature has devised mechanisms to package or supercoil it into the space inside individual cells.

Minicircles are so small because they are invisible to traditional microscope methods. They measure around 100 nanometres in length – where a nanometre is one-billionth of a metre.

The researchers in Yorkshire devised a method to see them using an atomic force microscope and simulations run on a supercomputer. That analysis revealed the “creases” and “defects” that dramatically change the structure of the DNA double helix, and which may affect how the genetic code is read.

Dr Alice Pyne, Lecturer in Polymers & Soft Matter at the University of Sheffield, who led the imaging experiments, said: “Seeing is believing, but with something as small as DNA, seeing this complex and flexible molecule was extremely challenging.

“Our atomic force microscopy techniques ‘see’ these structures by repeatedly ‘feeling’ them with a sharp point, reading out their helical structure and tracking their movements. We are able to measure the contours of the molecule and from that get an understanding of how it is being structurally deformed by supercoiling.”

Professor Tony Maxwell, from the John Innes Centre, where the biochemical and molecular biology aspects of the work were carried out, said: “This work is a great example of multidisciplinary and multi-centre collaborations and should revolutionise our ideas about long DNA molecules and their conformational flexibility. This research forms the basis of continued collaboration with the groups in Sheffield, Leeds and York”.

How the findings could be used in future research

Gene therapy is the use of nucleic acids such as DNA to repair, replace, or regulate genes to prevent or treat human disease. In the past few decades, hundreds of gene therapy candidate genes have been uncovered, yet very few of these have turned into target therapies..

Professor Lynn Zechiedrich from Baylor College of Medicine in Houston Texas, USA, who made the minicircles used in this study, has found a way to design supercoiled minicircles – or – minivectors for use in gene therapy, by inserting short genetic messages.

Professor Zechiedrich said: “The research team have developed a technique that reveals in remarkable detail how wrinkled, bubbled, kinked, denatured, and strangely shaped they are!

“We have to understand how supercoiling, which is so important for DNA activities in cells, affects DNA in hope that we can learn how to mimic or control it someday.”

Dr Massa Shoura from Stanford University, who has detected DNA minicircles in human cells, said: “Very little is currently understood about the function of circular DNAs in cells, but there is a chance they could be used as markers for early detection of disease”.

Dr Sarah Harris, Associate Professor in the School of Physics and Astronomy at the University of Leeds, who supervised the research, said: “The laws of physics apply just as well to the molecules that make up living systems as to sub-atomic particles and galaxies. The synergy between our experiments and computer models shows we are beginning to understand the physics underlying supercoiled DNA. This insight should help researchers such as Professor Zechiedrich design bespoke minicircles for future therapies.”