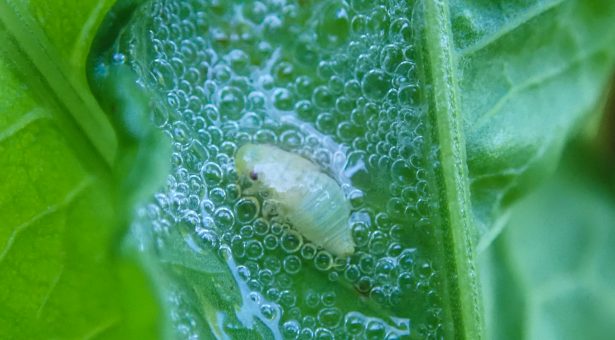 The next time you see those frothy blobs of cuckoo spit that appear on plants this time of year, take note: your evidence could contribute to a national research project.

Cuckoo-spit is produced by spittlebug nymphs as protection against predators and to prevent them drying out and is associated with the arrival of spring. Spittlebugs/froghoppers emerge from those frothy protective havens to feed as adults on a wide range of plants and trees.

Researchers at the John Innes Centre are inviting spittlebug spotters to contribute to a country-wide citizen science collaboration.

“You can help while out in your garden or perhaps exercising safely during the lockdown: if you see spittle or spittlebugs let us know where and what sort of plants you found them on,” said Dr Gerard Clover from the John Innes Centre.

“There are several types of spittle bugs featured in our video. We want to know what plants these spittlebugs like so that we learn more about the fascinating biology of these insects,” says Professor Saskia Hogenhout of the John Innes Centre and leader of the BRIGIT programme.

The spittlebug hunt will help inform the BRIGIT programme, a UK-wide consortium of 12 organisations led by the John Innes Centre, which is researching Xylella fastidiosa. This bacterial pathogen is not present in the UK, but it has devastated olive trees in Italy and is an emerging threat in southern Europe.

The researchers stress that people should not harm any spittlebugs.

The image at the top of the page shows a Philaenus spumarius and is reproduced here with the permission of Dr Claire Harkin from the School of Life Sciences at the University of Sussex.