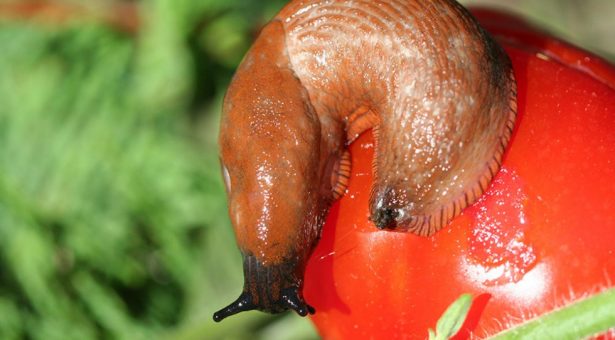 A mild 2013/14 winter has led to an explosion in the number and reach of the Spanish Slug in Great Britain.

As previously reported, Spanish Slugs are an invasive species which can grown up to 15cm and are often to be found in their hundreds, eating plant, carrion and even dog excrement in their path.

They were first identified by John Innes Centre head of entomology Dr Ian Bedford in his back garden in Norwich in 2012, with further sightings reported in the region as the word spread.

Now, the mild winter has provided optimal conditions for the species to gain a stronger foothold both in terms of number and in geographical reach.

Dr Bedford said: “I am hearing reports of possible sightings from further afield from ever before, including the Home counties, Wiltshire and the West Midlands, however, don’t be concerned if you see just one or two large slugs as they are likely to be native species; The invading Spanish slugs are to be found en masses (30 + at a time), with some householders reporting 3,000 – 4,000 in their garden in a month.”

And he had this tip for dispatching them: “Don’t step on them or cut them as they may contain harmful bacteria and parasites that could affect pets. The best way of getting rid of them is to drop them into a bucket of soapy water then tip in a cup of bleach once they have drowned. After 24 hours they can be disposed of by digging a hole and bury them in the garden.”