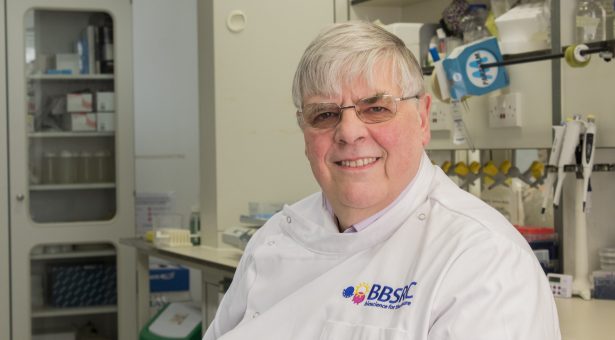 Professor George Lomonossoff has been named as the recipient of the 2015 Colworth Prize Lecture.

This prestigious award, made by the Society for General Microbiology and sponsored by the Colworth Laboratory at Unilever Research, is presented every two years to a scientist who has made an outstanding contribution to translational microbiology.

George is recognised for his work on developing the ‘hyper-translatable’ Cowpea Mosaic Virus expression system, or CPMV-HT for short. This technology, which exploits a modified version of part of a plant virus genome, turns plants into ‘factories’ capable of producing commercially important proteins on an industrial scale.

Quicker and more efficient than other protein expression systems, CPMV-HT has already been successfully used to produce vaccines against influenza, and to protect sheep against bluetongue disease. The technology can also be used to identify and produce novel metabolites from metabolic pathways.

Along with collaborator Dr Frank Sainsbury, George was co-awarded the BBSRC ‘Innovator of the Year’ prize in 2012 so he is no stranger to success.

Speaking about receiving the Colworth Prize Lecture, he said: “It’s a real honour to be the recipient of this prize and I would like to express my gratitude to the colleagues who nominated me. CPMV-HT is a really exciting technology that is already being used to produce vaccines for serious human and veterinary diseases, and it could have tremendous impact for commercial scale protein production in other industries too.”

George will receive £1,000 in prize money and will give a keynote lecture at the annual conference of the Society for General Microbiology in Birmingham next April.