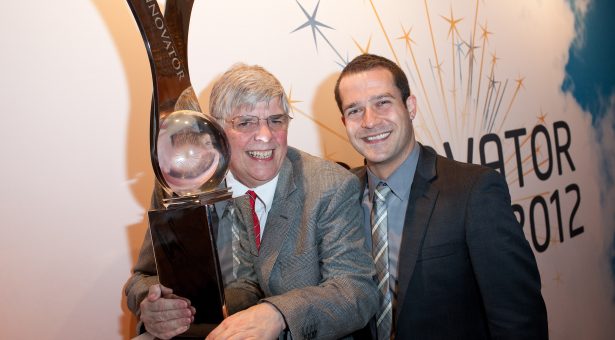 Professor George Lomonossoff has won ‘Most Promising Innovator’ and the overall ‘Innovator of the Year’ prize at this year’s national BBSRC Innovator of the Year Awards, for his work with Dr Frank Sainsbury on the development of a system for the rapid production of vaccines and pharmaceutical proteins in plants.

The technology allows plants to be used as mini factories, manufacturing beneficial proteins that can be used for medicinal and biotechnology purposes.

The technique is faster than current methods and so it offers an extremely effective way of creating vaccines. His work is already being used by Medicago, a Canadian biotechnology company, to develop a vaccine for the H5N1 avian influenza virus.

It has also been used by other research groups at the John Innes Centre and in other laboratories to help understand many aspects of fundamental plant biology and to rapidly evaluate new vaccines for application in humans and animals.

Dr Cable said: “I would like to congratulate the winners on their success. Their innovative ideas highlight the vital role that scientific knowledge plays in driving growth in important sectors like healthcare, food, and pharmaceuticals. The UK is a world leader in the biosciences and it is vital that we capitalise on this strength to deliver the maximum social and economic benefit. All of the finalists have gone to impressive lengths to ensure that the impacts of their research are felt well beyond the scientific community and this is truly worth celebrating.”

“I would like to congratulate George on winning this award” said Professor Dale Sanders, Director of the John Innes Centre.

“The advantages of the technology, in terms of speed and yield, have meant that it has been widely adopted by both the academic and commercial sectors for the production of foreign proteins and the manipulation of plant metabolism.”

The technology was developed with former John Innes Centre PhD student Dr Frank Sainsbury, who won the 2009 John Innes Foundation Prize for Excellence in Scientific Research for his PhD thesis on this work.

After leaving the John Innes Centre, Frank progressed to a postdoctoral position at the University of Laval, Canada, where he continues his studies on the production of high-value proteins in plants.

The system uses elements of Cowpea Mosaic Virus to achieve high levels of protein expression in plants, without the need for virus replication. It greatly increases both the speed and efficiency of protein production in plants, without producing infectious virus particles, which is one reason why Medicago Inc have used this method to scale up production of vaccines to commercial levels.

“The uptake of JIC research by industry is crucially important, and this is a shining example of how we have been able to translate fundamental research to combating a pressing problem facing society,” said Dr Jonathan Clarke,Head of Business Development at the John Innes Centre.

“This innovation demonstrates that fundamental research in plant and microbial biology can lead to enabling technologies with wider medical and industrial impact.”

The technology developed from Professor Lomonossoff’s long-standing research interests in plant viruses and has been developed and commercialised with Plant Bioscience Limited, the JIC’s technology transfer company.

Medicago Inc have also used the technology, a patent application for which has been filed by PBL, in the development of a vaccine against swine flu (H1N1)

With funding through a BBSRC Industrial Partnership Award, George is also working with Aura Biosciences Ltd. to investigate using adapted CPMV particles as a targeted drug delivery system, initially based on delivering an anti-cancer drug to cancerous cells.

Another Norwich Research Park scientist – Professor Richard Mithen from the Institute of Food Research, who made headlines recently when Beneforté broccoli went on sale in October – was also a finalist in the awards.

Professor Andrew Stewart Coats, Norwich Research Park CEO said: “The commercial potential of both Richard Mithen’s and George Lomonossoff’s work has been recognised by industry and ‘promising innovation’ is a term that can be applied to many organisations across the Norwich Research Park. We are very pleased that the work of our scientists has been acknowledged in this way.”

This is the third year in a row that scientists from the Norwich Research Park have collected prizes at the ‘Innovator of the Year Awards.’

The BBSRC Innovator of the Year Award is a competition designed to recognise and reward scientists who are ensuring that the UK’s excellent bioscience research is translated into outcomes that positively affect economic growth and quality of life for everyone.

The award, now in its fourth year, was established with a view to encouraging researchers to consider the potential of their research and take the necessary steps to maximise the social and economic impact of the excellent work they do.