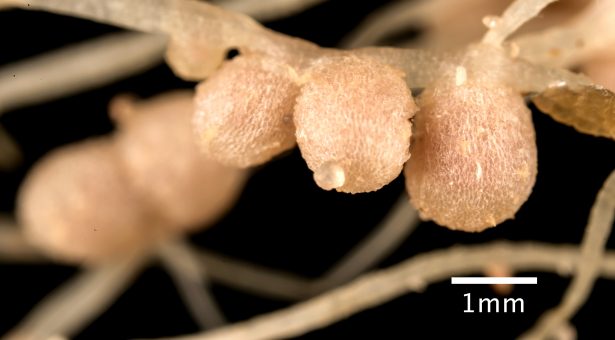 A new way of engineering nitrogen fixation has been discovered by a UK-China research team, bringing us one step closer to realising the goal of engineering a range of crops to fix their own nitrogen.

One of the major factors that limit crop growth is the availability of nitrogen, but only bacteria and other single-celled microbes called archaea can take nitrogen from the air and fix it into a form that can be used by plants. The process carried out by these microbes is known as biological nitrogen fixation.

Legumes obtain nitrogen from symbiotic nitrogen-fixing bacteria, but cereal crops including wheat and maize, rely on the availability of fixed nitrogen in the soil. In many cases the addition of chemical fertilisers is the only way to provide crops with enough nitrogen to ensure a good harvest.

The new method works by organising large numbers of genes which are required for nitrogen fixation into a smaller number of “giant genes”.  These are then expressed in the host cell as huge proteins known as “polyproteins” which are subsequently cut by a specific protease enzyme to release the individual nitrogen fixation components. One innovative part of this method is how the group identified the amount of each component required, and then grouped these together. This step ensures that the right balance is produced.

Professor Ray Dixon project leader in molecular microbiology at the John Innes Centre said: “This is a really exciting development for synthetic biology because it brings nearer the aim of engineering nitrogen fixation in cereals.”

The collaborative Peking University – John Innes Centre team say that this exciting method will be useful for transforming complex systems from prokaryotes such as bacteria to eukaryotic hosts such as plants.

Professor Dixon continues, “In the future this method may also be applied to engineering metabolic pathways in plants to produce antifungal and antibacterial secondary metabolites that provide resistance to pathogens.”

Key findings from the study which appeared in the journal PNAS include:

Read the commentary which accompanies this paper: ‘Extreme bioengineering to meet the nitrogen challenge’