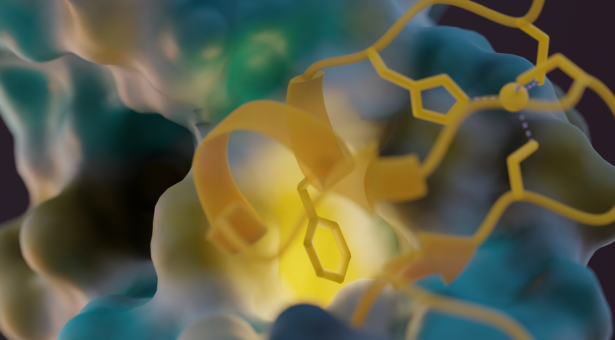 A mechanism used by a fungal pathogen to promote spread of the devastating cereal crop disease, blast, has been revealed in fine detail.

The Banfield group at the John Innes Centre, in collaboration with the Iwate Biotechnology Research Centre in Japan and The Sainsbury Laboratory in Norwich describes how an effector protein (AVR-Pii) used by the blast fungus Maganaporthe oryzae binds with the rice host receptor protein Exo70.

Using protein structure analysis, the study reveals a tight binding mechanism in which a significant proportion of the effector surface is involved in the interaction with the host target.

In revealing the structure of AVR-Pii, the research group have also shown that this effector  belongs to a new protein family in the blast pathogen, termed “Zifs”, as they are based on a Zinc-finger motif.

This research is published in Proceedings of the National Academy of Sciences (PNAS).

“We have identified a new family of Zif effectors, a finding which has implications for understanding the molecular mechanisms of blast disease. These proteins could be useful in our quest to engineer new disease resistance properties against blast,” said Professor Mark Banfield a group leader at the John Innes and corresponding author of the study.

Previously, all effector structures in the blast pathogen were from a family known as the MAX fold. The team hypothesised that AVR-Pii would not be a MAX effector, and speculated the research could discover a novel protein family.

This AVR-Pii – Exo70 interaction was already known to support disease resistance in rice plants expressing the NLR immune receptor protein pair Pii. But how the interaction underpinned resistance was unknown.

Future research will explore how the association between AVR-Pii and Exo70 leads to immune recognition by the NLR receptor. NLR receptors belong to a family of proteins that enable plants to  sense the presence of pathogen effector molecules and mount an immune response to resist disease.

Plant diseases destroy up to 30% of annual crop production, contributing to global food insecurity, and blast is a major disease of cereal crops.

Discovering how pathogens target plant hosts to promote virulence is essential if we are to understand how diseases develop, in addition to engineering immunity.

“A blast fungus zinc-finger fold effector binds to a hydrophobic pocket in host Exo70 proteins to modulate immune recognition in rice”, appears in PNAS (Proceedings of the National Academy of Sciences).