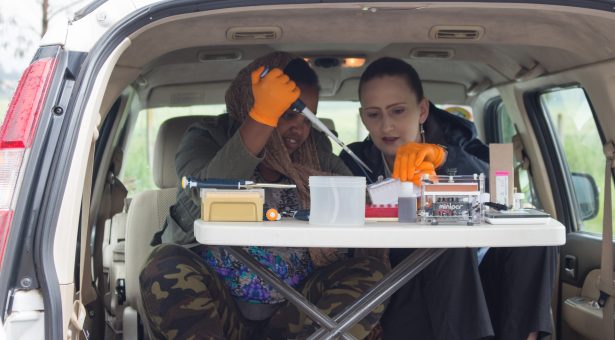 Using a hand-held DNA sequencing device, they can define the precise strain of the wheat rust fungus in a farmer’s field within just 48 hours of collecting samples. This gives researchers worldwide vital time needed to spot and control emerging epidemics.

The wheat rust fungi have threatened wheat production almost since the dawn of agriculture and harvests in all major wheat growing areas worldwide remain under threat. The best defence is to grow wheat varieties resistant to infection, but over time, new strains of rust develop that lead to new epidemics.

The best way to stay ahead of the rusts is to quickly identify and track the disease in the field.

The paper; ‘MARPLE, a point-of-care, strain-level disease diagnostics and surveillance tool for complex fungal pathogens‘ in BMC Biology shows how a research partnership reduced the speed of diagnostics from many months in high-end labs, to just two days from the side of an Ethiopian field.

“Knowing which strain you have, is critical information that can be incorporated into early warning systems and results in more effective control of disease outbreaks in farmer’s fields” said Dr Dave Hodson, a rust pathologist at CIMMYT in Ethiopia and co-author.

“The challenge is that tracking the wheat rusts is not as simple as you would expect. There are many different strains, all with unique characteristics that cannot be told apart without lengthy in-lab tests. Consequently, identifying which ones are a threat can take many, many months, likely by which time the infection has spread.” said Dr Diane Saunders, lead author and Group Leader at the John Innes Centre.

The new MARPLE (Mobile And Real-time PLant disEase) diagnostic platform the researchers created, targets parts of the rust genetic code that can be sequenced on the portable MinION sequencing platform from Oxford Nanopore. “This helps us tell strains apart and quickly recognise those we’ve seen before or spot new ones that could be a new threat.” said first author Dr Guru Radhakrishnan from the John Innes Centre.

“What started as a proof of concept is now already being used in the field,’ said Dr Saunders, “this development will enable increased surveillance of crop disease pressure and more targeted control.”

Part of the challenge for wheat farmers is that they are in a constant game of cat and mouse with the disease. Knowing which wheat rust strains are in the local area can feed into advising which wheat varieties are safest to grow.

“Finally, with this project we can bring the latest technology to field sites to inform not just the researchers but also the farmers,” said Tadessa Daba, Director, Agricultural Biotechnology Research Directorate, EIAR.

Saving time is not the only benefit, the MARPLE diagnostics method can also be carried out anywhere. Previously if researchers at field sites wanted to test a suspected infected sample, they would have to ship it to a handful of specialist labs frequently overseas.

The MARPLE diagnostics method was formulated to operate directly in the field. This in itself can be challenging with intermittent electricity, no internet access in remote locations and a lack of refrigeration for lab reagents. Yet, if the pipeline was to function at these research stations, it needed to work despite these barriers.

The new platform takes protocols that normally require a lot of equipment and expertise and brings it to a level where you require less facilities or specialist knowledge.

“We’ve tried to make as few cold chain elements as possible”, said PhD student and co-author Nicola Cook, “with simple steps that you can perform with chemicals that are readily available locally,”

As a proof of principle, the entire platform from field sample to strain level result was conducted in Holeta, Ethiopia in September last year. The research group demonstrated the MARPLE diagnostics pipeline operating successfully beside a wheat field, from the back of a Landcruiser.

“I’m really highly impressed with this project,” said Tesfaye Disasa, Director of Biosciences Institute, EIAR, “it introduces new technology into the country as well as the capacity building it brings to the institute.”

For their work on creating the MARPLE platform, the team were awarded Innovator of the Year award for international impact from the Biotechnology and Biological Sciences Research Council in May this year. Following this award and through the support of the CGIAR Inspire challenge and the Delivering Genetic Gain in Wheat Project, a further four field stations across Ethiopia will be setup to use the MARPLE mobile lab.

The paper outlines the steps that were taken to deliver this combined computational and experimental framework. It is hoped that by publishing this process, similar surveillance methods could be developed for other complex fungal pathogens that pose threats to plant, animal and human health.

Communication support was provided by the BBSRC Excellence with Impact Award to John Innes Centre and the Delivering Genetic Gain in Wheat Project led by Cornell University International Programs that is funded by the UK Department for International Development (DFID) and the Bill & Melinda & Gates Foundation.