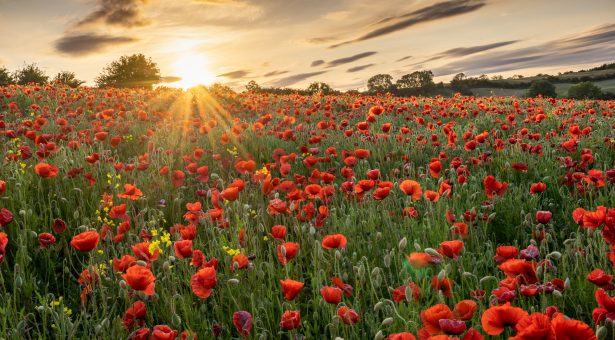 “The flush of flowering of poppies in a field makes the point very visually – the control of flowering time is a tightly regulated process.

All the poppies choose to flower within a day or two of each other, having individually integrated a range of environmental and endogenous signals over many months.

This synchronisation aligns the delicate phase of pollination and seed formation to occur in spring and summer when conditions are generally good,  maximising seed production. It also aligns flowering in species that cross-pollinate.

As well as providing an understanding one of the most important and fundamental processes in plants, research on flowering is also extremely important for agriculture.

Breeding for flowering time variation in many crops has significantly extended the geographical range of where they are grown. We need to accelerate this activity to keep up with a changing climate.

For the last 23 years I have been studying the molecular biology that underpins the control of flowering.

This was a big puzzle and so it has has taken a long time to unravel but from a starting point of almost no molecular understanding we now have a good idea of the regulatory network controlling flowering.

In addition, we now understand that the enormous variation in requirements for flowering in different plant species (for example, some need a particular daylength, others different temperatures) arises from relatively subtle rewiring of gene interactions within the overall conserved genetic network.

My focus has been on how plants sense and respond to winter.

Many plants will not flower unless they have had a period of prolonged cold. If you sow these types in spring rather than autumn they turn into massive green leafy plants but will not flower – my husband managed to do this experiment in our garden with some broccoli plants.

Plants actively make repressor proteins that keep all the genes required to make a flower switch off.

The prolonged cold of winter overcomes this block to flowering by silencing expression of this repressor. Cold switches the repressor gene off slowly but surely and then a memory system similar to one operating in our own bodies maintains that OFF state after the temperature warms up again in spring.

The way this memory works is very conserved which means it works in a similar way in many organisms including humans. Its mis-regulation can cause uncontrolled cell proliferation and accounts for many cancers and other diseases.

Very subtle changes in this memory system have also played important roles in enabling plants to adapt to many climates.

We work with a particular plant called thale cress (Arabidopsis thaliana) – you will find it all over your garden. It has a very small genome and has become the reference for all plant analysis rather like the Drosophila fly for human biology.

Thale cress is found growing from the equator to the Arctic Circle and is a great system to understand adaptation. Combining detailed molecular experiments with fieldwork in Northern Sweden enables us to really understand the evolutionary processes behind adaptation.

I feel privileged to have been able have a career in research– it is wonderful to be able to follow a passion and be paid for it! It is flexible and absorbing.

I would recommend it to everyone – and regularly do so to my two children. As a governor of a local girls’ school I encourage the sixth formers to consider general science degrees rather than the traditional choice of medicine. You can have it all…”