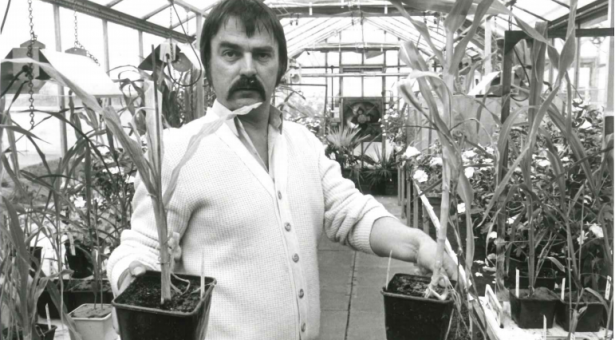 Former colleagues have fondly remembered the rich and varied achievements of Professor Jeffrey “Jeff” Davies, a leading figure in plant virology at the John Innes Centre for more than 20 years.

Professor Davies, who has died aged 78 following a short illness, joined the John Innes Institute in 1979 as Head of Virus Research, a position he held until his retirement in 2001.

After retiring the accomplished musician and musical director became interested in scientific aspects of the performing voice including rehabilitation for singers after medical conditions – at one point he successfully treated himself after his voice was affected.

Professor Davies’ appointment to the John Innes Institute marked a move into a new era of molecular biology for his department.

Professor George Lomonossoff, who joined the department in 1980 and remains at the John Innes Centre today, paid tribute to the career of his mentor.

“Under Jeff’s guidance, the department gained an international reputation at the forefront of molecular plant virology. The geminiviruses are now recognised as being of major agricultural and economic importance, and Jeff maintained his interest in them until his retirement, culminating in his publication of the first molecular model of the geminivirus particle structure in 2001.”

Professor Davies also had an impact on the research into the other major group of plant DNA viruses, the plant pararetroviruses.

Before joining the John Innes Centre, he completed a PhD at the University of Nottingham, worked in Wisconsin, United States, and Wageningen, the Netherlands.

A Fellow of the Linnean Society (FLS) and a Fellow of the Royal Society of Biology (FRSB), he was appointed a John Innes Centre Emeritus Fellow in 2001.

Another former John Innes Centre colleague Dr Simon Covey said: “Jeff transformed the Department of Virus Research at the John Innes Centre and developed an atmosphere of quiet encouragement and support that enabled his project leaders to push ahead with their own interests within the framework of the wider goals of the institute. It was a very productive department with many seminal papers in the highest quality journals as well as training many graduate students who went onto greater things.”

He was involved with a variety operatic companies including the Scottish Opera and the Wisconsin Opera. In Norfolk he directed opera productions at the Theatre Royal, Norwich with the Norfolk Opera Players. He also directed opera at the Auden Theatre, Holt with the North Norfolk Chamber Opera.

He formed his own professional opera company, ‘Opera da Camera,’ a small touring outfit which performed rare as well as standard opera, often in unusual venues – on one memorable occasion in a tent during a ferocious storm.

Opera da Camera developed into supporting the education of singing and performing in the East Anglian Summer Music School at the UEA (University of East Anglia), for which Professor Davies was the founder and the Director. He was a vocal coach and tutor, along with internationally acclaimed singers and accompanists, to advanced amateur adult singers and young professionals in the School’s Workshops and Masterclasses.

Professor Davies also directed many classical plays and comedies in Norwich, including at the Sewell Barn Theatre and the Maddermarket Theatre.