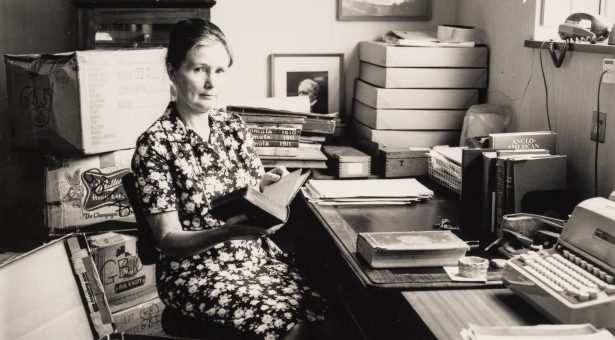 Former colleagues have paid tribute this week to archivist and science historian Rosemary Harvey who worked at the John Innes Centre for more than 40 years.

Rosemary started work at the John Innes Institute in 1957 when it was in Hertfordshire, before moving to Norwich in 1967 to the current John Innes Centre site at Colney.

During her career she developed an extremely wide knowledge of biological literature and sources, specialising in the 19th Century and first half of the 20th Century.

Her in-depth understanding of the history of genetics, evolutionary investigation and the controversies that surrounded the subject made her a focal point for researchers.

Her studies were greatly assisted by an excellent knowledge of European languages, including German, Russian, Latin, French and, occasionally Ancient Greek. She also had knowledge of Medieval Latin and Palaeography, allowing her to provide an invaluable translation service for scientists at the John Innes Centre.

Of particular interest to Rosemary was the life and writings of the first Director of the John Innes Institute, William Bateson, and the pivotal part he played in the establishment of the science of genetics. Rosemary had many articles published based on her knowledge of the John Innes Archives and the History of Genetics Library and her articles for the in-house bulletin ‘Archives Corner’ were extremely popular with staff.

Professor Enrico Coen FRS, a group leader at the John Innes Centre, said: “I knew Rosemary as an adviser to her Bateson biography project. She was tireless in unearthing every facet of Bateson’s life. The book she wrote was not only extraordinarily informative but had a wit and charm that came from her. Her family should be incredibly proud of her and the legacy she has left.”

Kate West, head of library, at the John Innes Centre said: “Rosemary was a gentle and kind person who I shall remember with much fondness. Her enthusiasm for Bateson and the epic work of her biography was obvious.”

Rosemary, had two children, Richard and Julia. Her funeral will take place at Colney Woodland Burial, Watton Road, Norwich on Tuesday 25 February, 11am.