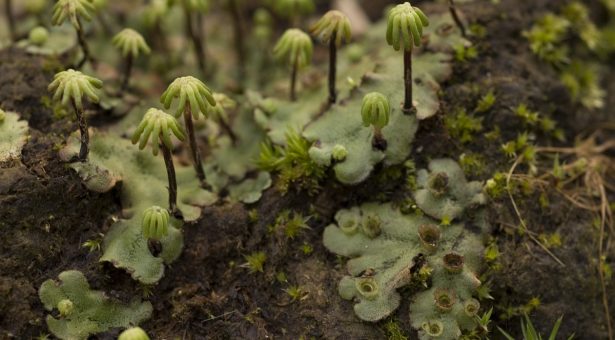 Research rooted in Norwich science has revealed how the arrival of the first plants 470 million years ago triggered a series of ice ages.

Scientists from the University of East Anglia (UEA) and the John Innes Centre, now at the Universities of Exeter and Oxford, set out to identify the effects that the first land plants had on the climate during the Ordovician Period, which ended 444 million years ago.

During this period the climate gradually cooled, leading to a series of ‘ice ages’. This global cooling was caused by a dramatic reduction in atmospheric carbon, which this research, published in Nature Geoscience, now suggests was triggered by the arrival of plants.

Among the first plants to grow on land were the ancestors of mosses that grow today.

This study shows that they extracted minerals such as calcium, magnesium, phosphorus and iron from rocks in order to grow. In so doing, they caused chemical weathering of the Earth’s surface. This had a dramatic impact on the global carbon cycle and subsequently on the climate. It could also have led to a mass extinction of marine life.

The team used the modern moss, Physcomitrella patens for their study. They created ‘microcosms’ made up of rocks in small incubators with and without moss growing on them.

Over three months they were able to measure the effects the moss had on the chemical weathering of the rocks. Much of this work was carried out by former Diss High School student Michael Crouch, as part of studies for a Masters degree.

They then used an Earth system model, developed at UEA, to establish what difference plants could have made to climate change during the Ordovician Period.

The research suggests that the first plants caused the weathering of calcium and magnesium ions from silicate rocks, such as granite, in a process that removed carbon dioxide from the atmosphere, forming new carbonate rocks in the ocean. This cooled global temperatures by around five degrees Celsius.

In addition, by weathering the nutrients phosphorus and iron from rocks, the first plants increased the quantities of both these nutrients going into the oceans, fuelling productivity there and causing organic carbon burial. This removed yet more carbon from the atmosphere, further cooling the climate by another two to three degrees Celsius. It could also have had a devastating impact on marine life, leading to a mass extinction that has puzzled scientists.

One of the lead researchers, Professor Tim Lenton of the University of Exeter said: “This study demonstrates the powerful effects that plants have on our climate. Although plants are still cooling the Earth’s climate by reducing atmospheric carbon levels, they cannot keep up with the speed of today’s human-induced climate change. In fact, it would take millions of years for plants to remove current carbon emissions from the atmosphere.”

Professor Liam Dolan of Oxford University, one of the lead researchers, said: “For me the most important take-home message is that the invasion of the land by plants – a pivotal time in the history of the planet – brought about huge climate changes. Our discovery emphasises that plants have a central regulatory role in the control of climate: they did yesterday, they do today and they certainly will in the future.”

The study was carried out by a team from the Universities of Exeter, Oxford and East Anglia and the John Innes Centre.

The project was funded by the Earth and Life Systems Alliance (ELSA) – a major strategic collaboration between the John Innes Centre and the University of East Anglia on the Norwich Research Park integrating world-class expertise in biological, earth and social sciences to tackle the challenges posed by a changing climate.