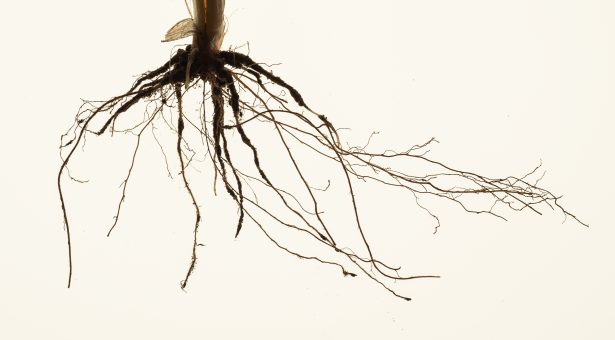 As far back as 1897 Charles Darwin recognised that roots were more than just anchoring plants to the soil, noting;

“… there is no structure in plants more wonderful, as far as its functions are concerned, than the tip of the radicle. [….] It is hardly an exaggeration to say that the tip of the radicle thus endowed, and having the power of directing the movements of the adjoining parts, acts like the brain …”

Seven year later, the term “rhizosphere’ was first introduced by agronomist and plant physiologist Lorenz Hiltner, as “the area around a plant root that is inhabited by a unique population of microorganisms influenced by the chemicals released from plant roots”.

Over a century later, here at the John Innes Centre we are continuing to learn more about the substantial impact roots have on their surrounding environment.

For example, Maria Hernandez-Soriano is a soil chemist, intrigued by the complexity of the chemical and biological processes that happen in soil and make it healthy and productive.

We asked Maria what else there is to learn from these ‘underground explorers’.

“The capability of roots to explore and mine the soil is crucial for the plant to adapt and survive the challenges of different stresses, for example during drought, or poor nutrient availability, meaning they are required to sense any changes in the environment and respond accordingly.

Because soil conditions are not uniform, this means no two roots are equal. Added to this complexity, root research has its limitations especially in comparison to above ground plant organs in terms of the accessibility.

Some root systems, such as the fig tree Ficus, in Transvaal, South Africa can extend over 100m underground. Meanwhile, a record-breaking rye, Secale cereale, was found to have a root system stretching a massive 623km.

Just like for roots, there is still so much below ground for us to explore and thankfully, imaging techniques are helping us dig further into the complexity and plasticity of root system architecture.

These technological advancements along, with an increasing understanding of the importance of the root system and the rhizosphere, is allowing us to make rapid advances in the field.

Roots are not just explorers, or anchors, and they don’t just take up water and nutrients.

One thing we are continuing to look at is the different compounds roots release back into the soil. They take water and nutrients from the soil to feed the plant, but they also release a complex mixture of compounds in the soil that we call root . The amount of carbon for example, fixed by photosynthesis that plants can transfer to the soil as root exudates ranges 20-40%.

Alongside carbon, other molecules in the root exudates act as an intriguing form of communication between the plant and the soil inhabitants. Essentially through the roots and the compounds they release the plant is talking to the surrounding soil, and we know that through the microbes in the soil, that communication is two-way.

For my own project in the Professor Tony Miller lab, I am interested in the roots of wheat.

Modern wheat varieties are the result of intensive breeding for above ground traits, but for a long time we forgot to dig into whether there were any underground traits, that could benefit not only the plant but also the soil health.

It has become evident that functions of the soil microbiome are a major contributor to the provision of essential nutrients to crops. This has created an urgent need to identify below ground traits that can support and improve soil health and key ecosystem functions such as nutrient cycling and provision of food.

We are now investigating this and specifically how root exudates can control the activity of microbial guilds that inhabit the rhizosphere of wheat.

Particularly, I am interested in the roots of ancient wheat varieties that have the capacity to control microbiome guilds involved in Nitrogen (N) cycling.

We have collected rhizosphere soil across the Watkins collection held at the John Innes Centre Germplasm Resource Unit and a population derived from an ancient variety that has a strong capacity to control transformation of N in the soil.

For this rhizosphere soil, we have explored which microbes and fungi live there and what are their main functions.

In collaboration with Simon Griffith and Luzie Wingen, we have obtained preliminary results that indicate a strong connection between the wheat genome and the abundance and activity of N-cycling microbes, and we are now exploring this communication deeper in the wheat genome and combining this information with analysis of the root architecture.

I am using image analysis software RhizoVision to measure and from a single image, we can measure up to 40 physical features from root length, density, lateral roots across wheat varieties.

We can link this information to important processes such as plant uptake of nitrogen. Thanks to the John Innes Centre photography platform we can obtain images with enough resolution to perform the analysis (Fig. 1 a).

In this figure, a wheat crown from a field grown plant has been analysed for a large set of physical features (Fig. 1 b) with different colours indicating different root diameter.

Outside the John Innes Centre, current research and activities in the field range across disciplines and scales, highlighted in the scientific program for the recent IRSS11 symposium and Rooting2021 that were held together with the motto ‘Root Biology Never Sleeps’.

My participation in the symposium as part of the Ambassador Program (@CluIsrr) has been an inspiring opportunity to connect with fellow root researchers across the world.

We explored the questions that we are trying to answer about the upside down of plants and how we are advancing science and technology to reveal critical secrets of the roots than can hold the future of agriculture and soil health.

The main outcomes of the conference will be available as a ‘symposium report’ in New Phytologist, currently under preparation by the ambassadors.

This is an exciting time in root research because what we learn will play a large role in the future of agriculture, helping us to grow crops that can make an efficient use of the soil as a source of water and nutrients while supporting soil health.”