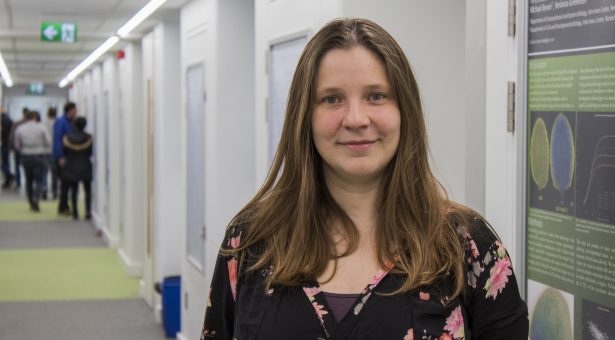 A sophisticated mechanism that allows plant roots to quickly respond to changes in soil conditions has been identified by an international research team.

Scientists from the John Innes Centre and Sapienza University, Rome, combined mathematical and computer modelling with molecular genetics to show how roots can regulate their growth via the interactions of two antagonistic hormones, auxin and cytokinin.

As the root grows and meristem cells at the tip continuously divide, they are left behind in relation to the moving root tip. When these cells reach a certain distance from the tip, called the transition position, they stop dividing and instead start elongating until reaching their maximum lengths.

But how do cells “know” when they have reached the transition position between division and elongation? What signal do they read out?

This, explains Dr Veronica Grieneisen of the John Innes Centre, is down to something called positional information, which is a common feature in all developing organisms:

“Cells, although initially all identical, need to change fate or behaviour according to where they are located in the embryo or organ. This is positional information.”

To solve the puzzle the teams of Dr Grieneisen and Dr Stan Marée from the John Innes Centre needed to discover what “positional information” is available at the transition zone to enable cells to know they are at the right location to transit behaviour from dividing (meristem zone) to elongating (elongation zone), and how this information is established and positioned.

Other studies by Dr Grieneisen, Dr Marée and colleagues had shown that the hormone auxin was present at very high levels at the root tip to maintain certain cells as stem cells, and that this was the result of fast dynamics of auxin swirling around due to PINs (proteins that pump auxin through the root).

Their computational work had revealed how these currents of auxin allowed the auxin maximum and its associated gradient to move together with the growing root, providing part of the necessary positional information required to coordinate the meristem zone.

Further recent work, however, showed that auxin does not regulate the transition alone. Antagonistic cross-talk between auxin and another hormone, cytokinin, could both stabilise the size of the meristem zone, and even change it – thus, either stabilising root growth, or changing its velocity.

Grieneisen and Sabatini joined forces, and together with the Marée lab developed a computerised root model in which the action of cytokinin on auxin transport and breakdown was examined.

They found that cytokinin’s influence generated a very typical pattern of auxin concentrations in the root: as before, with an auxin maximum at the tip, but they noticed that a dip in auxin appeared right at the transition zone of this computational root. This was then confirmed experimentally.

Dr Grieneisen explains: “It’s like a valley between two steep mountains. The cells in the root, as they move over the auxin landscape, transit from high auxin in the meristem into a region of low levels, and then rapidly again experience rises in auxin.”

“By merely sensing relative changes in auxin, cells robustly notice that they have reached the auxin minimum and thus the point of transition, triggering their switch in behaviour.”

In nature this mechanism allows the root to respond to its environment, proliferating in favourable conditions while restricting growth in adversity.