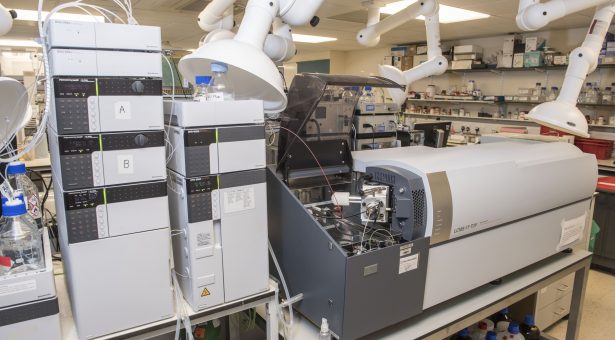 Lionel Hill loved machines as a child and now he gets to play on some of the biggest and ‘whizziest’ we have on-site at the John Innes Centre, but what exactly is metabolomics?

“If you’re a scientist, rather than looking at a single chemical that is interesting, why not look at all the chemicals that make up a plant at once? That’s metabolomics.

To do that, you need anything that can see lots of chemicals at the same time. We tend to use a combination of chromatography and mass spectrometry.

Chromatography is simply a method of separating a mixture of different chemicals, using a solution. You can do chromatography yourself to separate the colours of ink in felt tip pens with water and coffee filter paper. By drawing circles on the filter paper and then holding it so the bottom of the paper is just touching the water, the water will be drawn up the paper and move the different coloured dyes that make up the ink at different speeds, separating them from one another.

Mass spectrometry is weighing individual molecules of chemicals. We use both mass spectrometry and chromatography together because if you don’t separate the chemicals out, all you get the masses of all of them jumbled together, which is hard to interpret.

If you separate them and then weigh them, you get a much clearer picture of how much of each chemical is present and making up the whole. The mass spec can also tell us a bit about what the chemicals are. The mass of a chemical is the sum of all of its bits, but those bits might be arranged in different orders. The mass spectrometer machine can also rattle a molecule about a bit and that allows you to investigate all the sub-units, which can help you understand the overall molecule.

There are a few myths floating around about metabolomics.

One of those, thanks to programmes like CSI, is that you can pop a sample into a machine and three-seconds later you have this perfect read-out of its chemical composition, which are all perfect matches to things in the library. It is not that easy to identify chemicals, particularly when you are working with natural products. There is a whole diversity of nature out there, making chemicals that we have never even looked at, they’re not in the library, so it’s not just a case of pressing a button and the machine searching the library and telling you what it is, it can be a long, drawn-out, process. The length of time it takes depends on what you want to measure and how many times we will then need to validate any measurements we get.

The other myth is that chemicals are dangerous and nasty. Of course, there are dangerous and nasty chemicals, but as with bacteria, there are good ones too. People tend to hear the word ‘chemical’ and think of an artificial, horrible, thing. However, most of what we are working on is stuff made by nature, some of which is beneficial and useful, so we want to understand it.

The majority of our work is with John Innes Centre scientists, but we also have strong collaborations with people at The Sainsbury Laboratory and the University of East Anglia. As a platform we are available to anybody, be they on the Norwich Research Park, or further afield, academic or industrial.

One of our ongoing projects is working with Professor Cathie Martin on anthocyanins, which I find really enjoyable; hunting for anthocyanins is just fun.

I enjoy all my work really, but our work on heavy isotopes is particularly interesting. As well as the element Carbon-14, which is radioactive and people know from the carbon dating process, there is also Carbon-13, which is carbon, just a little heavier and not radioactive, making up around 1% of all the carbon on earth. There are a few other isotopes like that, which aren’t radioactive and which you can use to label chemicals to give them a different weight, but with the same chemistry. At one stage I got into some new work analysis of labelled material, where people had fed this labelled material to plants and then investigated where that had metabolised, using it to track the plants metabolism. That was a big analytical struggle as I needed to devise new ways to measure the heavier compounds indent of the light compounds, accurately. It was really fun, albeit in a very geeky, technical little corner of the scientific world.

One of the aspects I really like about working on a technology platform that is useful to many different projects, is that I get to work on loads of interesting things, much more so than if I just had my own individual project.

I got into metabolomics by accident. I was a biochemist and after I had done my PhD here at the John Innes Centre, I went to Germany to work with Mark Stitt, who was at the time working on primary metabolism, which is energy metabolism i.e. the main pathways into a cell which break down the energy. Mark liked to measure the chemicals in those pathways, which he did using a very tedious system of measuring each chemical one at a time. It was all we had back then, and I discovered that I enjoyed the process of measuring the chemicals. Then as the technology improved and metabolomics was born, I thought ‘well I enjoy measuring chemicals, so let’s go and measure chemicals’, so here I am. I kind of drifted into it you could say.

Meanwhile my colleagues came to it completely differently. For example, Baldeep Kular was a Research Assistant here for a long time, and came over to us, largely because of her experience of liquid chromatography. Her route has been more of the classic technician route, while my colleague Paul Brett, is a proper analytical chemist, who came here from Briar Chemicals, so he trained as a chemist and we all find ourselves doing the same job, having approached it from three completely different directions.

I probably didn’t want to be a scientist as a child, my fascination was machines. I loved drawing them and figuring out how things worked, I guess I was very engineering orientated, but I was never good enough at maths for that. It turns out though that mass spectrometry is the best of both worlds, engineering and science for me. I get to do scientific research and play with big, whizzy, machines.”