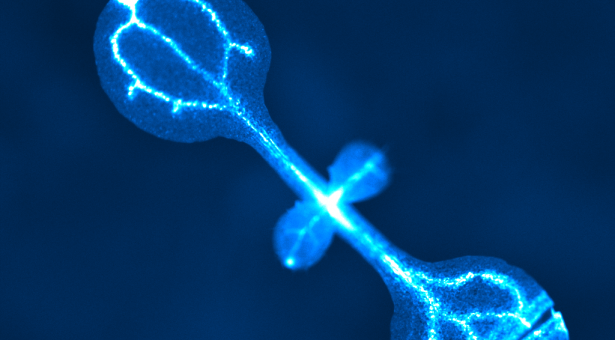 New findings about the mechanisms of long-distance signalling in plants were published last month in Science Advances. The findings debunk longstanding theories of how plants rely on calcium waves to respond systemically to wounding and other stresses.

John Innes Centre researchers suggest that calcium waves transmitted through plants are not the primary response but are in fact a response to an initial wave of amino acids released from a wound.

This challenges established thinking on “long distance” (leaf to leaf) and “short distance” (cell-to-cell) signaling and the mechanisms by which information travels from the point of stress through living and non-living plant tissues.

Here we look at how Dr Christine Faulkner and her group at the John Innes Centre begin to unravel this mystery.

“Every time this current active propagation model was presented, I would question how this wave travelled from cell to cell. I felt strongly that there was a hole in the theory, and this new research has uncovered a new mechanism that shows that the calcium wave isn’t what it seems,” said Dr Faulkner.

A clue as to what was happening came when researchers in her team spotted that calcium waves slow down when they travel cell to cell. This finding suggested that the waves were not a result of an active mechanism, but a passive one such as diffusion. Passive mechanisms are not sustained by propagating mechanisms and will dissipate.

This led to experiments to quantify calcium wave dynamics, to prove that the mechanism was passive rather than active, and a new model emerged.

Using fluorescent reporter proteins and dyes they found that calcium waves have dynamics consistent with a mechanism that is driven by passive movement of amino acids rather than an active mechanism that is transmitted with a sustained speed (like you would see with a domino run).

Diffusion and bulk flow are passive mechanisms by which molecules move depending on the environment – here diffusion occurs in the cell wall and bulk flow in the xylem water conduits.

Mathematical calculations confirmed that the speed and distance travelled by the calcium wave is consistent with these passive mechanisms.

Now that this mechanism has been uncovered Dr Faulkner’s group is carrying out experiments to find out exactly what information is being transmitted by the glutamate and calcium waves, and why these mechanisms have evolved in plants.

One line of investigation is that the glutamate-mediated calcium wave enables longer distancing signaling and means plants can signal trauma even when their cell-to-cell communication channels, plasmodesmata, are temporarily closed, for example due to the threat of a pathogen.

Dr Faulkner explained: “We know that this wave can pass through dead tissue, and this indicates that you do not need a living cell and all its contents for the message to pass. Our model means that plants can communicate using a distinct set of signals even when they have had to close their plasmodesmata.”

“Just as humans have many diverse ways of communicating messages plants too have alternative options, which are particularly important in time of stress or trauma. In humans, if someone puts their hand over our mouth, we can still wave our hand. It may be that plants have evolved two different pathways that complement each other.”

Nearly a century ago the botanist Ricca had proposed that long- distance signals travelled via a chemical that moves through a plant.

Dr Faulkner said: “Ricca did not know about calcium signalling, but he watched Mimosa pinnules move in response to wounding some distance away. He speculated that a mobile chemical that travelled from the wound to trigger the response would best explained what he saw and nearly 100 years later we can say that he was right!”