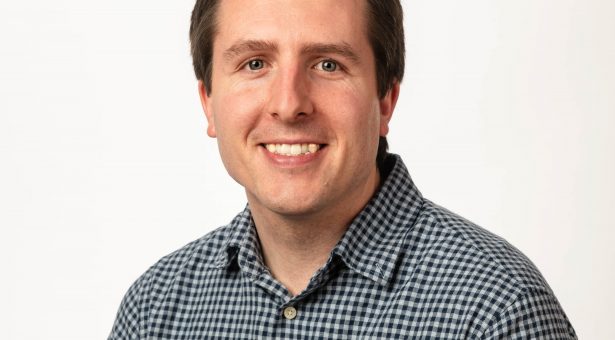 Last month we met with Dr Michael Webster, who has joined the John Innes Centre as a Group Leader from the Institut de Génétique et de Biologie Moléculaire et Cellulaire (IGBMC) in Strasbourg.

We sat down with Michael to learn more about his research, scientific interests and career so far.

“Growing up, I loved reading about the history of science and discovery, but until I started university I didn’t know any scientists.

I first became confident I wanted to be a scientist when I came to appreciate that the incredible diversity of all life is embedded within a surprisingly simple set of instructions – the genetic code.

That we can now read this code, understand it in terms of the atoms that it is made of, and harness it for technologies is something that I feel lucky to have the chance to ponder every single day.

I am grateful to have a family who have always valued thinking, reading, questioning and wondering. I realise now that this is essential to maintaining the enthusiasm for understanding the world that we feel as children all the way into adulthood.

I started my scientific career as an undergraduate at the University of Sydney studying biochemistry.

While I was an Honours student there, I discovered the field that I find endlessly fascinating and have never left; detailed molecular mechanisms; in particular those that support expression of the genome.

In the group of Professor Joel Mackay at the University of Sydney, I worked on determining the role of a set of unusual proteins that can bind both to DNA, the cell’s primary store of genetic information, as well as RNA, the molecule that is transcribed from it.

By having two abilities, these molecules support communication between different stages of the gene expression pathway and I have continued to explore these connections ever since.

In 2013, I moved to the MRC Laboratory of Molecular Biology (LMB) in Cambridge to work with Dr Lori Passmore.

I was drawn to the LMB for its renowned place in the history of biomolecular structure determination and the basis of genetic information and in Lori’s group I learned cryogenic electron microscopy (cryo-EM) for solving molecular structures.

The timing of my arrival was very fortunate. This was a moment of tremendous technical advancement in cryo-EM that has become known as the ‘resolution revolution’. For the first time, cryo-EM could readily be used to see the details of proteins, and it was exciting to work alongside the scientists in Cambridge at the forefront of this endeavour.

Using cryo-EM and other techniques, I studied the mechanism of a protein complex called Ccr4-Not, whose conserved job is switch off genes by trimming the RNAs that encode them.

Biochemical processes that are separate need to talk to each other to allow cells to respond rapidly and effectively to environmental changes. However, the molecular basis of such connections has long been enigmatic. As a student, I discovered ways in which the rates of two gene expression stages, mRNA decoding and decay, are connected by the Ccr4-Not complex.

I selected a topic for my postdoctoral research that focused on another variety of communication between the stages of gene expression: mRNA synthesis and decoding in bacteria.

In the group of Albert Weixlbaumer at the IGBMC in Strasbourg I was supported by the ‘EMBO long-term fellowship’.

Using cryo-EM, I determined the architectures of very large molecular assemblies that contain both RNA polymerase, which transcribes genes, and the ribosome, which then decodes them. This showed how the rate that genes are read is regulated by their concurrent decoding.

I found this topic particularly exciting because visualising molecular assemblies so large and dynamic was a technical challenge that has only been possible in the last few years.

My research group here at the John Innes Centre will seek to understand the molecular machines that express photosynthetic genes.

How plant cells capture solar energy is a process called photosynthesis that is fairly well understood. But we have a lot to learn about how the proteins that perform photosynthesis are made – how the genes that encode them are expressed. Fundamental questions, such as what determines the timing and level of their production, remain unanswered.

This biological question is challenging partly because the genes that encode photosynthetic proteins are embedded within two different genomes.

The first is the nuclear genome, which is read by molecular machines similar to those of other complex organisms, such as humans.

The second is the chloroplast genome, which is decoded by a set of molecules more like that of bacteria. A fascinating molecular cooperation is therefore needed to make the photosynthetic apparatus.

We will begin by examining the atomic structure and biochemical activity of chloroplast gene expression complexes.

To do this, we isolate specific molecular assemblies from green leaves and examine them in the electron microscope at nearly atomic resolution. We then relate the structure of the molecule to its role in the cell with the help of biochemical and biophysical experiments.

The discoveries that we make will be important for two main reasons.

The second reason I have chosen this line of research is for its potential use. Insight into what controls the timing of photosynthetic gene expression will guide important efforts to improve the yield of crops.

The John Innes Centre has an excellent reputation for producing outstanding research within a supportive environment and represents a uniquely valuable environment for my research topic.

There is a vast range of expertise in plant and microbial molecular biology available to help us develop our ideas about photosynthetic gene expression. Furthermore, the infrastructure for structural biology is excellent, and we will make use of the cryo-electron microscope within the Bioimaging Facility.”