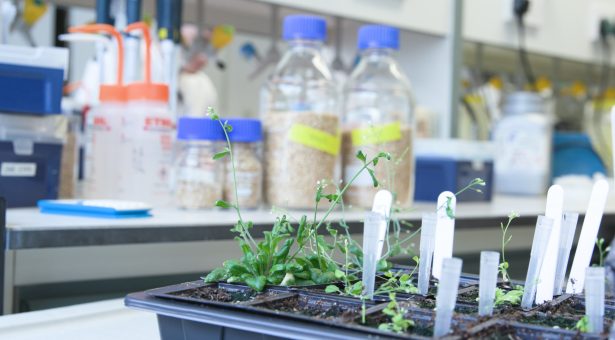 We sat down with Susan to discuss her work so far and how she arrived at this point.

“I am currently investigating a potential role for subcellular RNA localisation in root development.

There are many examples of this working as a mechanism to establish and/or reinforce polarity in other organisms, but a lack of high-resolution RNA imaging methods had prevented similar research in plants.

During my PhD in Professor Dame Caroline Dean’s lab I took part in a side project with Dr Stefanie Rosa who was working as a postdoc at the time. Together we developed the first single molecule RNA labelling method for Arabidopsis root cells, called ‘smFISH’, which provides images of single mRNA molecules and enables quantification of transcript numbers per cell.

The best piece of advice I have received came from Caroline, who told me to ‘choose projects that fascinate you and always try to do work that you love’. At times it has not been easy advice to follow, but I’m so glad that I have.

Since establishing smFISH for plants, I’ve been keen to investigate RNA subcellular localisation as I had finally provided the resolution required.

After my PhD I worked as a postdoc in Dr Verônica Grieneisen’s group at the John Innes Centre on an unrelated cell biology project, but she supported my efforts to explore this further. I wrote a successful OpenPlant grant that allowed me to set up the method and look at this in her lab – again as a side project.

Verônica’s work really helped me to gain a lot of knowledge about the role of polarity in root development and I became more familiar with research by Professor Philip Benfey at Duke University.

Philip’s extensive work has revealed a process where SHORT ROOT protein is produced in the central vascular bundle of cells in the root, but then it moves outward, just to the neighbouring single cell layer, to interact with another transcription factor – SCARECROW.

This polarised protein movement made me think that SHORT ROOT RNA could be a good potential candidate to test for RNA localisation.

My career then took me to the Earlham Institute as a postdoc in Professor Anthony Hall’s lab where I investigated circadian gene regulation in wheat using delayed fluorescence imaging and RNA-sequencing based approaches.

I also managed to convince Anthony that smFISH could provide a useful insight into our work and he supported my efforts to adapt smFISH for use in wheat cells.

My work on wheat afforded me the chance to present a poster at a Plant Molecular Biology Gordon Conference in Boston. This was a fantastic experience that provided me with an opportunity to speak to Philip Benfey.

I told Philip about my idea about SHORT ROOT RNA, which piqued his interest and led to him and Anthony supporting my successful application for a Company of Biologists travel fellowship to visit Philip’s lab at Duke University in North Carolina.

During my time at Duke, I observed an interesting RNA phenotype in a subset of cells that I thought might be triggered by a specific RNA structure, which led me to contact Dr Yiliang Ding back at the John Innes Centre as I knew this was her area of expertise.

Yiliang and members of her group, together with Dr Zoë Waller’s group at UEA, conducted sequence analysis and in vitro biochemical assays to show that SHR RNA contains a structure called a G-Quadruplex that can trigger phase separation in the absence of protein.

I returned to visit Duke again, but family commitments prevented me from moving out full-time to the US to continue this work with Philip. Thankfully, Yiliang has been a very supportive and together we have had two successful grant applications (JIC ISF and Gatsby funding). These grants have allowed me to return to Norwich and continue working on this fascinating project back at the John Innes Centre.

Since developing the smFISH method back in 2016, I’ve used it to investigate a range of biological questions involving sense-antisense transcription at individual loci, validation for computation models of gene regulation and sub-genome organisation in wheat nuclei – all as part of side projects.

Now, I have a fantastic opportunity to carry out smFISH experiments full time on a project that is close to my heart.

Although I discovered a love of science much later than most researchers, this has not prevented me from forging a career that has allowed me to travel the world, work in numerous labs and meet loads of amazing people.

I left school at 15 and became a mum at 18. I only discovered my passion for science at the age of 30, when I completed an Open University course that was a prerequisite for entry into a midwifery program.

I was so taken by an interest in academic science that instead of midwifery I enrolled on a science foundation year at the University of East Anglia (UEA), which provided me with an A Level standard of education in biology, physics and chemistry.

I was daunted by the thought of higher education as no one in my family had attended university, but I managed to complete a Biomedicine degree and finish top of my year. My experience as an UEA undergraduate convinced me that I should try and pursue a career in research.

One of my lecturers – Professor Andy Johnston – had previously worked as a group leader at the John Innes Centre and he suggested that I apply for a PhD in Caroline’s lab.

I’m still not sure how Andy persuaded me to apply to such a prestigious lab, but I am so grateful for his suggestion. This ultimately set me on a path where I’ve been fortunate to carry out research that I am both fascinated by and love, just as Caroline advised.”