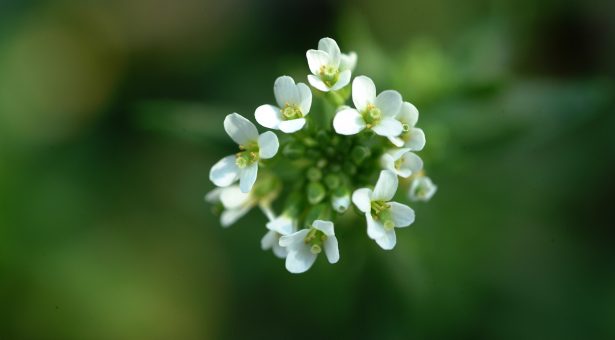 Arabidopsis’ story continues (catch up on part 1 and part 2) and the weed now forms the foundation of thousands of studies around the world, including at the John Innes Centre.

The ground-breaking work that has been done on Arabidopsis at the John Innes Centre is attributable to its introduction by Professor Dame Caroline Dean who, in 1988, returned to England from California with seed packets from one of its earliest champions; Maarteen Koorneef.

Dean worked on identifying mutations and mapping the plant’s chromosome; all significant contributions to the ‘Arabidopsis Genome Project’ which, in 2000, after collaboration with biotechnology companies including Monsanto, released the complete Arabidopsis genome 3 years earlier than anticipated.

Since then Arabidopsis been used in a plethora of ways at the John Innes Centre including in work on epigenetics by Professor Dean’s lab.

Epigenetics is the study of phenotypic changes in organisms through the modification of gene expression rather than by a change in the organism’s genotype and has many varied potential medical applications including the potential to explain mechanisms of ageing, human development, and the origins of cancer, heart disease, mental illness, as well as several other conditions.

An example of this, and one that has interested Professor Dean since the beginning of her career, is the timing of flowering of certain plants (including tulips) after exposure to prolonged cold. This process, known as ‘vernalisation’, ensures that plants overwinter efficiently and then flower in spring to maximise reproductive success. Arabidopsis has been at the centre of this research which led to the identification of the pathways that trigger the switch from vegetative to reproductive development (Simpson and Dean, 2002).

Through a series of laboratory, greenhouse and field-based experiments using both broccoli and Arabidopsis, Professor Dean and her team were able to show that small changes in a single gene are responsible for the range of dates that different broccoli varieties flower.

Dr Judith Irwin, a crop geneticist at the John Innes Centre and first author of The Plant Journal paper said:

“Identifying the gene involved means we now have a target for plant breeding programs to develop new brassica varieties. This will be especially important in the face of climate change, because our weather patterns and climate conditions are changing and we need new vegetable varieties to be resilient to this change.”

In 2015 Scientists from the John Innes Centre, the Universities of Cambridge and Edinburgh and Stanford University in California, introduced genes from algae into arabidopsis (Atkinson et al., 2016).

These algae have a carbon-concentrating mechanism meaning that photosynthesis is maximised through the increased efficiency of the photosynthetic enzyme RuBisCO.

It is hoped that eventually the entire algal photosynthetic mechanism could be inserted into plants, increasing their yield and contributing to the food security.

The contributions of Arabidopsis have also diverged to the study of plant disease and once again, it is the genetic proximity of arabidopsis to other crops that has highlighted its utility as a model organism.

One example comes from potato late blight, which causes crops to become shrunken and rotten, costing farmers around 15% of their crop each year.

In 2016, it was discovered that the pathogen which causes potato late blight (Phytopthora infestans) can also infect Arabidopsis, as long as another pathogen, Albugo laibachii, has already colonised the host plant (Belhaj et al., 2017).

Potato late blight was previously thought to be a potato and tomato specialist, however, the behaviour and speed of infection in Arabidopsis bears close resemblance to that in susceptible potato plants and by studying any potential resistance in Arabidopsis it is hoped that this can be transferred to those key crops.

In August 2017, a new breakthrough was made involving research on Arabidopsis. By untangling the genetics that control and regulate the yield of a crop scientists at the John Innes Centre identified and isolated the dwarfing gene that was central to the ‘Green Revolution’, during which world wheat yields almost doubled, because plants with shorter stems are less likely to fall over in the field, and as a result greater yields are harvested.

These new variants, of crops such as barley, wheat, and rice had the beneficial shorter stems, but inadvertently also included another important trait that ultimately reduced the potential yield of the crop: reduced meristem size leading to smaller grains.

However, Professor Robert Sablowski and his team managed to separate the genes responsible for stem growth and grain size.

As Professor Sablowski explains; “by separating the stem growth and meristem size effect we could unlock further yield increases in widely-used varieties, the ‘Green Revolution’ may not have yielded all its fruits.”

These examples only scratch the surface of the thousands of interesting and influential studies utilising Arabidopsis, both at the John Innes Centre and world-wide.

It is evident that this humble weed has spread its roots to many aspects of biological science and is proving itself to be far more useful than William Curtis and many more recent sceptics may have ever predicted.

Despite still meeting with some opposition, a plant lacking the persistent constitution so characteristic of a garden weed may never have made it this far.