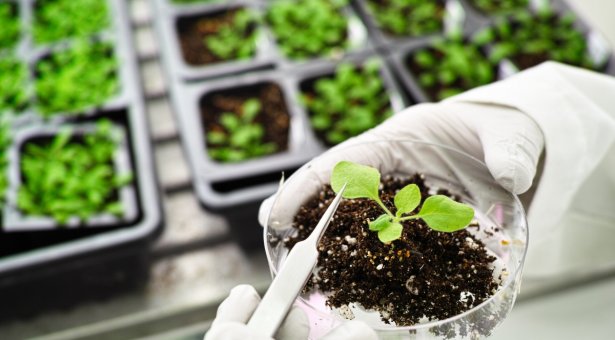 After receiving an additional £96k from BBSRC for the Flexible Talent Mobility Account (FTMA) programme, we caught up with our first recipient to take advantage of the extra funds, Dr Tash Bush, to find out how valuable the extension of the scheme has been for her.

Tash arrived at the John Innes Centre back in 2010 to complete her Master’s degree placement in the Professor Tony Maxwell lab. After spending the next two years working at Inspiralis as a Project Scientist, Tash returned to the Maxwell lab as a Research Assistant to complete her PhD before transitioning into life as a Postdoctoral Scientist.

Since then, Tash has continued working in the Maxwell lab, investigating the role topoisomerases play in illegitimate recombination.

During her appraisal in 2019 Tash began to consider her next career move; arriving at three possible options;

1. Applying for another Postdoc position to build upon her skills

2. Applying for a Group Leader position

Although applying for another Postdoc position was tempting, that path wasn’t long enough to bring stability to Tash and her family.

To become a Group Leader, the time dedication and additional publications needed would also have taken more time than she was willing to give at that point in her life. So, as her thoughts turned to maybe leaving scientific research entirely, Tash considered a potential career in medical writing.

As she already had an interest in communications and science translation, when Tash’s Group Leader suggested the possibility of a place on the FTMA industry placement programme, Tash jumped at the chance to explore those interests in the industrial sector.

In February 2020, Tash was successfully recruited to the FTMA industry programme, undertaking a placement at John Innes Enterprises (JIE) between May and August 2020.

Recently headed up by Dr Simon Aspland, JIE welcomed the opportunity to host Tash where her focus was looking into the commercial viability of Professor Matt Hutching’s streptomyces seed coating technology, Actinograin.

Despite having no previous experience in either Intellectual Property (IP) or Commercialisation, Tash impressed JIE with her willingness to develop a new skillset, while continuing to use the independent research skills already learned in the lab.

When asked if being out of her usual surroundings was what she expected, Tash told us;

“By being out of the lab, with your head out of research, it gives you time to think. When you’re in your research group, you’re really focussed on it and you don’t give yourself the time or space to think about where you’re going. The FTMA opened my eyes to different ways of working; different ways of thinking, especially during lockdown”.

Having taken on the brand-new area of IP and Commercialisation, we asked Tash whether her thinking had changed her outlook on how we should be using our research.

“Commercialisation is almost seen as a bit of a dirty word, with some people’s viewpoints being that there is no point to IP. In truth, the way science moves society forward is by putting it out there and making it available.

While there’s an ideology of information being free and sharing it with the entire world, I think there’s also a lack of understanding that to progress things takes money, including spending money to make things happen.

It’s a fact that part of it is that you have to do some level of commercialisation and IP protection because that’s what drives science forward”, Tash told us.

Tash emphasised that the placement developed not only the new job skills, but also gave her an appreciation for the wider institute.

“It was really interesting to also see how the Knowledge Exchange and Commerialisation (KEC) and Communications & Engagement teams both work together to uphold the reputation of the Institute.

As a Postdoc in a lab, I didn’t really understand what KEC was about, or how they could help me, so being in the team was very useful. I think creating more visibility to the opportunities that KEC have on offer is very important too.

There’s a lot of work to be done with scientists about changing the mindset around career progression. The nice thing about the FTMA is that your work is just on pause so your work will still get done. So, the great thing is that you’re not actually losing any time.

I think taking on new subjects like IP and Commercialisation can be quite daunting because they take you out of your comfort zone, and because you don’t know where to start, you feel too scared to try.

With the FTMA though, it feels like a safe space to give it a go. It’s a chance for you to explore something else without having to jump out of academia completely”.

Looking ahead to her future career, we asked Tash for her thoughts on how her time in industry might now influence her jobs choices.

“I actually have a job interview coming up and being able to say that I now have experience in IP and Commercialisation definitely helped me get passed the application stage.

After speaking with the hiring officer, they told me that because everyone at the company is involved at all levels, having that new knowledge is really useful to them”.

Having Tash as our first part-time secondee, we asked her how she felt the placement had gone especially working part-time and during lockdown.

“Because I wanted to work part-time, I was worried about applying for jobs which required a full-time person. However, working part-time during the placement definitely gave me the confidence to tackle that area of concern.

I also think working remotely was more successful than I first thought. Gathering information and interviewing industry contracts online was very straightforward and I was lucky that everyone I spoke to was happy to talk to me remotely”.

We asked Tash’s superviser Dr Simon Aspland what the view from JIE was;

“With JIE working on many fronts in parallel, including actively serving the needs of over 40 research groups and 16 technology platforms, the FTMA represented a value opportunity to conduct an in-depth analysis of a spinout and having Tash’s strong technical expertise and initiative helped us to do that”.

When asked about the positives and negatives of hosting a FTMA secondee, Simon told us,

“From my perspective, the main highlight was the chance to work with Tash and think through a spinout opportunity in depth and with focus. I learnt a lot about a new topic and had the chance to think about a technology opportunity in new ways. In addition to the directions I recommended Tash pursue, she followed others of her own design so learning alongside her was enjoyable.

The negatives are pandemic related since the entire FTMA placement took place during the COVID-19 lockdown, with all communication using MS Teams or Zoom. It would have been preferable to have the opportunity to work in person, but we still made good progress”.

In his experience, we asked Simon what advice he would give to Postdocs interested in pursuing a career in industry.

“Learn about the range of careers in industry that your scientific training prepares you for, which are much broader than being a bench scientist, and decide which might best suit your interests.

Learn the basics of intellectual property as patents are central to monetising innovation and if possible, gain experience from one or more internships in industry settings.

Talk to people that are in roles you would like to have in future. Participate in any entrepreneurial or business plan competitions that are available. In general, network and be nice and introductions really help”.

We ended by asking Simon if JIE would consider hosting again.

“JIE would be happy to work with future FTMA secondees, interns or other short or part-time employees that are motivated by the translation of science for societal or commercial gain. Capability is as important as experience and there is no shortage of projects to work on”.

By awarding a travel budget to attend industry and networking events, Tash’s placement ended with the booking of a delegate place on the virtual World Agri-Tech Innovation Summit 2020 in September.

We wish Tash the best of luck for the future. If you’d be interested in discussing how the FTMA might benefit you, email Karen Rushmer.