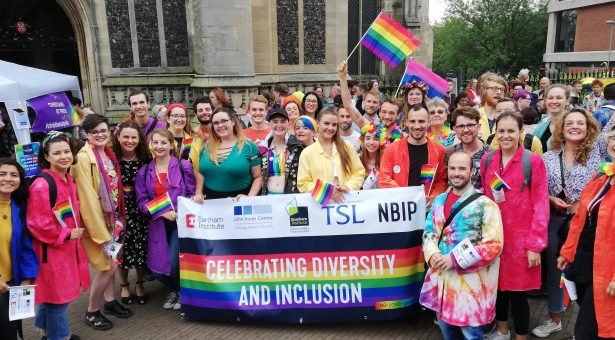 At the John Innes Centre we believe our strength comes from our ability to attract the best researchers, research support staff and students from the UK, Europe and internationally.

We recognise that in order to achieve their full potential our staff and students need to be able to bring their whole self to work, this requires an environment where people feel welcome, safe and respected. We are constantly striving to create and maintain a diverse inclusive community alongside a vibrant, dynamic and intellectual environment.

To mark LGBTSTEMDAY we’re focusing on just one area where we are striving to be inclusive and welcoming. We asked some of our staff and students to tell us about their experiences of life as an LGBTQ+ person on the Norwich Research Park.

“I am a Research Assistant and I have worked at the John Innes Centre for 16 years and before that I worked at The Sainsbury Laboratory for a year. I am currently working in a group that investigates the processes of fruit development, and for several years before that I was working on meiosis in wheat and polyploid Arabidopsis.

Over the years I have got to know many scientists on-site and I have formed friendships with many colleagues. I am lucky enough to be out and accepted as an LGBTQ+ person by my colleagues, which helps a lot with informal conversations over lunch breaks for example. I would find it a struggle if I had to hide that part of me and my life every working day.

In my opinion, our work environment is generally accepting and inclusive, which is probably due to the fact that we are a very diverse community of people. We have staff and students from so many different countries coming to work here.

This is one of the aspects that I love about science. It can be a bit of a challenge too, of course, as some people come from backgrounds where being LGBTQ+ is not commonly accepted or is even illegal. But this can be an opportunity to try and introduce them to a different way of thinking; or if they are LGBTQ+ themselves then it is a chance for them to be open about who they are.

I find it astounding to hear that quite a few people out there still think of scientists as being middle-aged, white, straight, cis men. Luckily, I think the general public are gradually starting to see that scientists are in fact an impressive mix of people. It’s important that we carry on spreading this message, as I want to make sure that young people feel they can consider a scientific career whoever they are and whatever their background.

I took on the role of Stonewall rep for the John Innes Centre a couple of years ago, after the previous rep left the institute. They had a done such a great job of putting things in place here for the LGBT+ community, and I wanted to make sure that was carried on after they left.

I set up a Norwich Bioscience Institutes LGBTQ+ working group involving members from all four institutes (the John Innes Centre, The Sainsbury Laboratory, Earlham Institute and Quadram) in January 2019 and it’s been great to have been able to join our communities together for special events such as Norwich Pride and IDAHoBiT (International Day Against Homophobia, Biphobia and Transphobia).

Our LGBTQ+ group are working with other groups across the Norwich Research Park to try and emphasise the importance of being allies, not only to our LGBT+ community but also in supporting gender equality and racial equality.

As an LGBTQ+ person and Stonewall rep, I want to ensure that staff and students here feel they are respected and valued, regardless of sexual orientation or gender identity.”

“I’m a Group Leader and have worked at the John Innes Centre for three months, so I am quite new to the institute and the wider Norwich Research Park.

My group studies the role of floral traits such as floral scent in flowering plant evolution and diversity. I’ve wanted to be a scientist since I was very young – my parents are scientists so I got a sense that it was a career choice from the beginning.

I am an asexual nonbinary scientist, meaning that I am not really attracted to other people and don’t identify as either male or female (I use she/her pronouns mainly).

Here at the John Innes Centre I am fortunate that neither of these aspects of my identity are an issue in the slightest. I can have a double rainbow sticker (asexual and nonbinary pride flags) on my laptop and nobody bats an eye. There is lots of support here for LGBTQ+ folks in my experience thus far – during my interview I met with Emilie as the Stonewall rep, John Innes Centre has a transitioning at work policy which is driven by the person transitioning, and we have a working group which has been really welcoming.

I think several things contribute towards having a welcoming workplace. Having a workplace that is diverse in identities (national origin, gender, race/ethnicity, disability, LGBTQ+, and others) is a somewhat self-fulfilling prophecy – the more diverse you are, the more diverse people you will recruit, especially if you make diversity a true priority as we have done here.

Education is also key – if people aren’t aware of LGBTQ+ as an identity group, or have prejudices about what LGBTQ+ people are like, or haven’t heard of things like personal pronoun use, they can make assumptions that end up being problematic.

There’s a fine balance, though – members of minority groups such as LGBTQ+ people shouldn’t always have to be the educators (this gets tiring), and not everyone is comfortable with being “out” in their identity in the workplace. So, it’s important things like this come from the top of the organisation as well as grassroots movements, and it’s important that individuals try to educate themselves or ask allies for help.

If you run into a new identity term you haven’t seen before, don’t be afraid to look it up, especially if you can find a decent, reputable source of information. There’s a lot to be said for normalising certain things, too – including pronouns on conference name badges and email signatures, for example, even if they seem obvious. This makes identity part of the conversation and allows it to be a standard thing we take into account.

Having grown up in a family of scientists, and LGBTQ+-friendly scientists at that, I knew that my identities would fit in science, but this isn’t true for everyone. When we depict scientists as cis straight able-bodied white men, we tell the rest of the world that they don’t belong, and that excludes a lot of really amazing people from the picture.

By depicting scientists as what they truly are – a rainbow of individuals with diverse identities – we welcome anyone interested in science into our fields, career paths, and educational paths. If we’re to progress as a field and as a society, we need diverse perspectives, and we’ll only get that if we make it visibly clear that everyone is welcome.”

“Growing up gay in a straight world, the only representation I ever saw of people like me was in the arts. Although this itself never put me off pursuing a career in science I didn’t know of any LGBTQ+ scientists and had the belief that disclosing my sexuality would be ‘too personal’ in a science environment.

I remember applying for PhD positions and seeing a blog from the John Innes Centre on LGBTQ+  visibility. At the time, it was an important signal of the environment at Norwich Research Park. I am now a second year PhD student working to understand the genetic responses of oilseed rape to climate change.

One of the reasons I’ve grown to love working at John Innes Centre is because that last sentence is all I ever get judged for and I don’t have to expend the emotional energy it takes living in a closet. I think LGBTQ+ visibility alongside good straight allies at the institute has contributed to that.

To produce the best science, we will always need LGBTQ+ visibility. When you see people like you represented in a workplace you can imagine yourself working there. LGBTQ+ visibility ensures we pull from the best talent pool, not just a subset of the population, and, importantly, works to create an environment that ensures you retain that talent.

A 2018 study in Science Advances found that retention of LGBT men in science was lower than their straight counterparts. In the same year a study by Stonewall found QTIPOC (queer, trans and intersex people of colour) were four times as likely to face LGBT-specific workplace discrimination than their white LGBT colleagues.

So, when we talk about LGBTQ+ visibility, we must explicitly include every LGBTQ+ person. Different identities intersect and can compound discrimination. If science still looks predominantly white, straight, cis and male we will continue to only attract and retain those people, and this diminishes scientific output.

Research is a career that we devote a lot of energy to. It can be exhausting to feel isolated, and the simple act of connecting with and seeing other people like you reduces this emotional burden. The other aspect that ensures you recruit and retain the best talent is working alongside good allies.

I believe an ally is someone who treats you the same as anyone else but has also committed to understanding, and therefore can advocate for, the unique differences and struggles you may face because of your identity.

The second part of that is essential. For a cis or straight person, learning about the ways your LGBTQ+ colleagues may face prejudice or discrimination at work or in their lives, and speaking up when necessary, relieves some of the burden LGBTQ+ people can face.

A workplace can only thrive when everyone, without exception, feels safe and belongs.”

The photo at the top of this page shows staff from across the Norwich Research Park at Norwich Pride 2019.