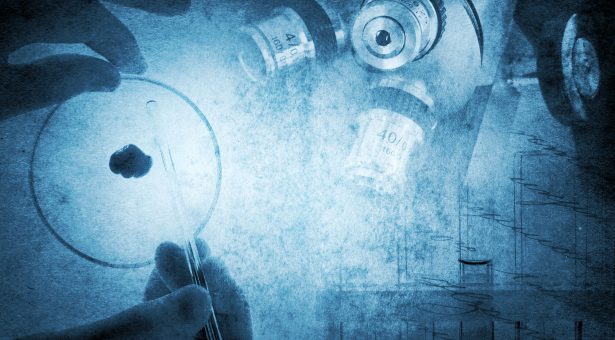 Back in May, Mark Smedley received the GENius of the Month award after an incredible 12 months.

His year included being an author on four scientific papers, with another due out shortly and an honorary award from the University of East Anglia. He also represented his group at a major genome editing conference in Dublin, Ireland.

We sat down with Mark to chat about his work on genetic crop transformation and Crispr/Cas genome editing, as well as training the next generation and how he became a scientist.

“Constructs or vectors are my thing, isolating genes, amplifying and cloning them, basically, I chop them up and putting them back together.

I became interested in science at a young age, growing up on the outskirts of Bournemouth in Dorset. I would have been around 8 years-old at the time and I vividly recall my teacher, Mr Weaver showed us how to make iron gall ink, with oak apples and iron filings. I sat transfixed and thought ‘this is really cool’. Whatever the subject, Mr Weaver was able to add some science to the lesson.

When I left school, I didn’t go straight into a science degree, I went travelling, and had a number of different jobs, including running my own business, before I made my return to science, having started growing plants at home in my spare-time. The more I read on plants, the more interested in plant science I became.

My curiosity got the better of me and I decided to take myself off to college, while still running my business. Once that was done, I thought ‘well let’s see how far I can go with this’, so I sold the business on and went off to Greenwich University to do first my degree, before coming up to the John Innes Centre, Norwich as a postgraduate student. I have been here ever since.

I’m part of the crop transformation team here at the John Innes Centre, where my main job is to manage the constructs/vectors we use for transformation and genome editing.

This means doing a lot of bioinformatics, sitting and looking at sequences, designing guides for genome editing etc. Plus, I do all the molecular biology aspects like putting all the bits of DNA together, cutting and pasting on a molecular scale, if you like.

Initially, I was trained in plant science and I have worked on both sides, from tissue culture and transformation but also the molecular and microbial side of things. I am able to cover all the steps, from designing constructs, cloning, transformation, through to the analysis of the transgenics, or genome edited plants.

I got into crop transformation, when I was doing my first degree, because that was the time that transformation was first becoming popular, scientifically.

Scientists were increasingly becoming aware that the demands of population growth, required us to think of new ways to feed everyone. At the time just about every scientific paper that was being published began; ‘by 2050 the population will exceed 7 billion…’ or words to that effect, so crop transformation was increasingly touted as a tool to help solve this looming crisis.

I think the technological advances of CRISPR/Cas based gene editing has led to a second wave of interest recently.

We transform/gene edit a number of crops in the crop transformation group and each one requires different constructs and vectors.

Currently we are working on; wheat, barley, brassicas, potatoes, tomatoes, tobacco and some of the legumes like Medicago and lotus. Many groups on the Norwich Research Park turn to me for advice on construct design and assembly, so even when I haven’t built the constructs, I have still played an important role in numerous projects.

It is not just internal people that I train, but I also look after a number of scientific visitors throughout the year, training them on vector design, cloning, genome editing techniques.

In the last year, I have had scientists from China, Finland, Norway, Belgium and the Czech Republic. Each person will come for 4-6 weeks, during which time, I teach them how to design guide RNAs for CRISPR/Cas9, how to build constructs, how to then put those constructs into Agrobacterium and then other group members will show them how to use that Agrobacterium to transform the specific crop plant they are interested in.

I like to see my role as giving people a fishing rod and showing them how to use it, before letting them go fishing.

At the moment, as a group, we are heavily investing in base editing, which again is a genome editing technique based on CRISPR/Cas9, but it has another protein fused to it, which actually allows us to change single DNA bases, so we can change a C to a T or a G to an A in the DNA sequence.

I was the first person in the group to recognise the potential of base editing having looked at what was being done in mammalian systems. One of the things that got me hooked, was how precise it is, even more precise than the standard CRISPR/Cas9, for instance, if you have “CAA” early in the sequence, by being able to change that C to a T you effectively switch that gene off by creating an early stop codon. stopping a protein being produced, in a very precise, controlled way.

I’m also involved with a new base editing project in Brassica and others in the group are base editing in barley.”