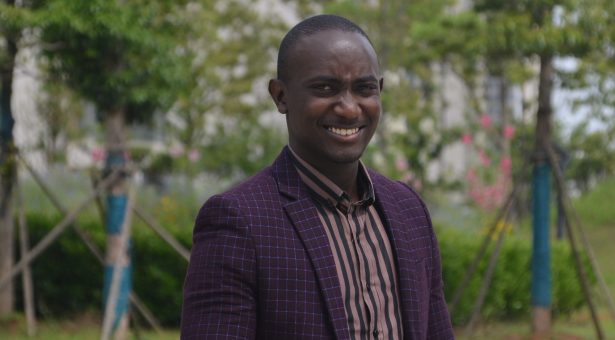 Paul is part of the Africa-Britain-China research collaboration project under CEPAMS, which builds its relationship with the Sino-Africa Joint Research Centre (SAJOREC), based at the Jomo Kenyatta University of Agriculture and Technology (JKUAT).

We chatted to Paul to find out more about what he’ll be working on and his career so far.

“Before I joined the John Innes Centre, I was a master’s student at the University of Chinese Academy of Sciences, Wuhan Botanical Garden.

I majored in Botany and my research field was in Phylogenetics, Biogeography and Diversification of terrestrial plants. During my Masters I published a paper on the ‘Systematics of Lobelioideae (Campanulaceae)‘.

Immediately after my undergraduate study I got a research assistantship position at the Jomo Kenyatta University of Agriculture and Technology, where I worked on the analgesic and anti-inflammatory potential certain Ruellia species found in the region using Swiss albino mice.

I wanted to be either a medical doctor, an architect or a scientist when I was a young kid, and I feel very fortunate that I have become a scientist.

I liked science ever since I was in primary school and my family and people close to me knew about this. I had the best grade in science related subjects from biology to chemistry.

My new role, as Research Assistant in Cathie’s lab involves a study of the chemoprotective properties of some traditional Chinese medicinal plants specifically species from genus Scutellaria.

This genus belongs to Lamiaceae (Mint) family and it has been reported to have species with medicinal purposes.

As much as I see myself as an evolutionary biologist, I have always had a thing when it comes to phytochemistry, biochemistry and secondary metabolites studies on traditional medicinal plants and Cathie’s Lab fitted exactly the description of what I wanted after my Masters studies.

Traditionally, species belonging to Scutellaria are used as anti-inflammatory, anti-bacterial, sedative, anti-allergic, anti-oxidant, anti-thrombotic and anti-cancer, just but to mention a few.

The project involves extraction and quantification of different active compounds in Scutellaria species, where there are made from and later on examining the presence of different types of trichomes using microscopy.

The thought of observing minute plant features in details excites me, I think it’s because I also like photography and seeing things under the lens.

I have worked on anti-diabetic, anti-inflammatory, and analgesic potential of different medicinal plants and I always wanted to try something on anti-cancer properties of medicinal plants, which Cathie’s lab is working on currently.

Also, the diversity in Cathie’s lab is wonderful, different scientist from different parts of the world, which is good for building network and collaborations. It is just wonderful to be in her lab group.

We are applying knowledge of nature’s diversity to benefit agriculture, the environment, human health and well-being and through this project, active compounds from the plants will be harnessed and used in the health sector to treat and manage several diseases that has been affecting mankind such as cancer, which is one of the leading causes of death in the 21st Century.

Science for me is art, because all the ideas and hypothesis start from the mind, then it is realised in the lab and presented on a paper for the world to read and consume.