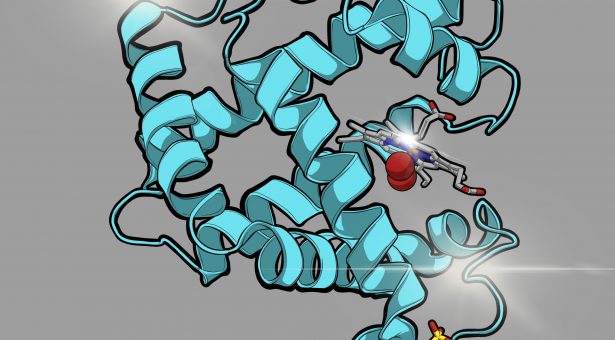 Julia Mundy is our Science Technician for both our Protein Crystallography and Biophysical Analysis technology platforms.

Back when she was at Primary School and long before thoughts of being a scientist had crossed her mind, Julia was one of the first students to experience a lesson delivered by the SAW Trust.

We caught up with her to find out how that lesson inspired her and led to a career in science, here at the John Innes Centre.

“The day the SAW Trust came and gave us one of their art and science lessons was a very memorable part of my time at primary school.

I remember a scientist coming in and talking to us about their work and showing us some pictures related to science, including images of microorganisms which I’d never really seen before. We were then given the opportunity to take those pictures and be creative with them through drawing and the written word. I wrote a poem and did a painting inspired by a couple of the images.

As a child, I always loved drawing. I was an easy child to look after because if you gave me a stack of pencils and a pad of paper, I was happy for hours. I also really enjoyed the ‘Horrible Science’ books, so the session held by the SAW Trust was a coming together of two of my main interests; science and art, which I had never previously thought went well together.

Both my pieces were then selected by the SAW team to feature in the book, ‘Seesaw’ alongside pieces my friends had done. We were really proud to have been selected and I remember the school marked it by putting on a special assembly to talk about it, during which we each got up and read our pieces out. I still have the book and I’m still proud of being in it.

Before the SAW Trust came to the school, I was interested in science, but I hadn’t yet seen it as a job, or career. The scientists who came in that day, were the first actual scientists I think I’d ever met. Rather than just being names or photos in a book, suddenly they were real people, doing real jobs. I, like them, wanted to get involved in science as a career.

After finishing my A-Levels, I went to the University of East Anglia where I did Biomedicine, and stayed on to do a Masters in Molecular Medicine. I really enjoyed both of those courses so I secured a PhD studentship to carry on with my education.

However, for a variety of reasons I wasn’t really getting on with the PhD, so I applied for this science technician role here at the John Innes Centre and downgraded to a Masters by Research. I still had to produce a thesis and undertake a viva to get the Masters qualification, so I was writing up my thesis while also working full time. It was an intense start to the job here, but I learned a lot through the process.

While I had been a lab technician before, when I applied for the job I have here now, working on the Protein Crystallography platform, I’d never before grown a crystal.

Since starting, I have come to love how visual protein crystallography and structural biology is. Recently I have also started doing illustrations as part of my role, illustrating proteins and crystals as well as making illustrated figures for papers and publications.

Making scientific illustrations is something I have greatly enjoyed, and I’d like to do more of these in the future as a way of communicating the great science we do here.

Often science is perceived as a bit dry and a bit boring, which I think puts lots of people off from wanting to find out more. Colourful and novel ways of communicating science draw more people in to wanting to find out more. I am quite a visual person, so for me anything that can help communicate science visually, like the SAW Trust do, is something I am passionate about and want to continue, because getting the word out is really important. Plus, proteins and crystals look really cool, so they lend themselves perfectly to more visual methods of communication.

Day-to-day I look after the instruments on our Protein Crystallography and Biophysical Analysis platforms, and also deliver training to other scientists on how to get the most out of the world class technologies we have here on-site.

One nice aspect of our work, is that we get to work on a range of plant research or microbial projects, rather than just working in one area. Among a number of groups, we have worked with Professor Tony Maxwell looking at DNA Gyrase and Professor Mark Banfield who focuses on rice blast fungus.  This keeps some variety in the job, and provides an opportunity to find out more about the breadth of research which goes on here.

The SAW Trust lesson, and how artwork could be so readily tied to science has stuck with me throughout my burgeoning science career, and I would like to work further with them to keep connections between science and art alive, and use my skills as a method to communicate science with others“.