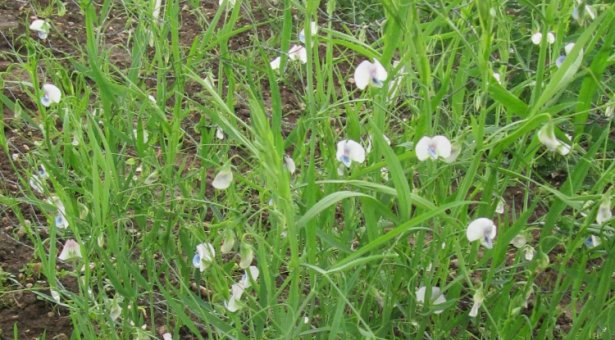 Grass pea, the crop with the curse, is set for a major change in reputation thousands of years after it was first cultivated.

The transformation becomes a possibility after researchers at John Innes Centre, along with colleagues in Ethiopia and Kenya, were awarded £1.2m from BBSRC under the Global Challenges Research Fund.

The project, Unlocking the Potential of Grass pea for Resilient Agriculture in Drought-prone Environments (UPGRADE) marks an intriguing turning point in the chequered history of the ancient crop.

Peter Emmrich: Grass pea is one of the original crops from what is known as the ‘fertile crescent’, where agriculture and human populations flourished, thanks to the Nile, Tigris and Euphrates. It has been harvested perhaps for as long as 8,000 years and is now widely cultivated in Bangladesh, Ethiopia, India, and Nepal.

We were attracted to the plant because it is extremely nutritious – second only to soybean and lupin in terms of seed protein content in the legume family. It is also very hardy – it has a long root system and as such is drought and flood resistant, which means it is the only reliable food crop for many.

Yet the times of scarcity are when it is at its most dangerous. Grass pea contains a neurotoxin called Beta-ODAP which causes the classic neurological disease lathyrism in humans and domestic animals. When it is the main food consumed it can cause irreversible paralysis.

We saw potential in this crop if only the toxin levels could be reduced.

What have you done so far?

Cathie Martin: Using a classical breeding route, we have been focused on the identification of new traits and their delivery for improving this insurance crop. We first set up a high-throughput screening method to screen mutant populations to identify lines that were low in the toxin and now we are developing genotypic markers to allow accelerated breeding for beneficial traits including low-toxin levels.

We have developed safe grass pea varieties that can be adopted by smallholders and farmers in regions of the world where this is an important crop.

These traits will be introgressed into locally adapted germplasm so that they would be available rapidly as a nutritious food source and as a forage crop.

What are the aims of the new collaboration?

Peter Emmrich: The aim is to breed and introduce locally-adapted, low toxin varieties within five years of the project’s completion. We have been careful to use an approach that wasn’t subject to burdensome regulation, so that it could have impact for local people without being tied-up in red tape.

The UPGRADE project will coordinate lab- and glasshouse-based research in the UK with field studies in Ethiopia and Kenya to allow the rapid integration of the new, low-toxin varieties into existing breeding programmes in sub-Saharan Africa. The collaboration includes scientists from the region and the International Center for Agricultural Research in the Dry Areas (ICARDA), who have already developed some improved varieties of this crop. By building on their work and applying modern breeding approaches, the collaboration aims to speed up the process of crop improvement.

Cathie Martin: It’s a huge breakthrough to reduce the toxin to safe levels, because it means that grass pea can be a safe, resilient, insurance crop, especially beneficial to smallholder farmers.

But it is a crop that could be much more than that, especially in the face of climate change. We are looking at introducing other agronomically important traits, which would lead to the expanded cultivation of grass pea.

What do we know about the plant’s colourful cultural past?

Cathie Martin: Grass pea festivals were a feature of medieval life (and remain so) in some parts of southern Europe reflecting the crop’s importance as a famine food.

It’s side effects are famously depicted in a Goya etching Gracias á la almorta, (Thanks to the grass pea) depicting the Napoleonic siege of Madrid, in which bowls of grass pea are handed out to starving citizens. But one woman lies paralysed on the ground in front of the group.

The effects of the disease involve paralysis, particularly of the lower limbs. You have to eat a lot, and pretty much nothing else to see these effects. But the stigma means that it had become a forgotten crop. It was banned from certain states in India because of outbreaks of neurolathyrism.

Can we find out more about this mysterious toxin?

Peter Emmrich: We are trying to find out how the plant produces the toxin. This is part of ongoing research, to inform the breeding that we need to do. We need to produce varieties that are high-yielding, work well in the field and can withstand all the environmental stresses the plants suffer in Sub-Saharan Africa.”

But does it taste good?

Cathie Martin: In India they make a flour out of it and cut it with gram flour so that it makes tasty chapatis and dal. Here at the John Innes Centre we have made a humous out of it, and it was very delicious, far tastier than what I can buy locally.

The ground-breaking project to cultivate grass pea in drought-prone areas has been awarded funding under the Sustainable Agriculture for Sub-Saharan Africa (SASSA) fund. The projects were informed by the needs of countries in Sub-Saharan Africa, raised in a Global Challenges Research Fund workshop held in Kenya in March 2017.

The UPGRADE project is funded from the UK Government’s Global Challenges Research Fund, which aims to deploy the UK’s world-leading research capability to address challenges faced by developing countries.