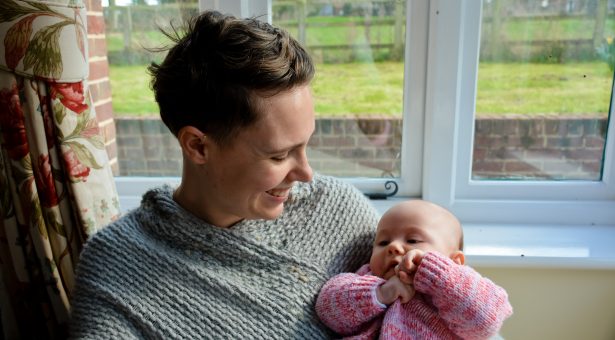 Natassja Bush is a Postdoctoral Scientist in the Professor Tony Maxwell lab, she is also a mother.

We caught up with Natassja on her return to work after Maternity Leave to find out how she was getting on, what she had learned and what she would say to anyone in science considering starting or extending their family.

“I caught the scientific research bug about 12 years ago while doing my honour’s year in South Africa and it was at that point, I decided that I would like to have a career in research, and I would need to get my PhD. It was also at that point, that my family decided to immigrate to the UK.

Thus, at the age of 29, I found myself starting a PhD at the John Innes Centre.

2013 was a big year for me in other ways too, as earlier that year I got married. It didn’t take long for that stereotypical question; ‘when are you going to have a baby?’, to start being asked by well-meaning family and friends.

At the time, I was embarking on my PhD and there was no space for a tiny person on that journey. However, five years later, after the PhD dust had settled, the ticking of my biological clock became too loud for me to ignore and my husband and I decided to try to have a baby.

This was not an easy decision, mostly due to concerns I had around how having a baby would potentially impact my career prospects. There were other things to consider too. Could I afford to take the full allocation of maternity leave? How was this potential child going to be cared for when, or if, I returned to work?

Moreover, there were things out of my control like how I would respond to pregnancy and how would I cope if our child needed extra care? I have never enjoyed gambling, but I felt like I was playing the biggest lottery known to man. Nevertheless, we took the plunge and I became pregnant in April 2018.

At first, I was worried about telling my boss. Mostly, because I felt that I was letting him down as I would be abandoning him for the duration of my maternity leave. I was also worried about how this would affect the momentum in my career. I had several experiments to complete and a paper to write. I was trying to reconcile the idea of taking time out to start a family at a time when I felt I should be putting my head down and getting my career in science started, just as many of my younger colleagues were doing. I was also worried that I would be seen to be not as invested in my scientific future.

In hindsight, a lot of these concerns were completely ridiculous.

First, my boss was incredibly supportive and excited for us. Second, I have come to realise that there is never a ‘good time’ in your career to have a baby. Each stage comes with its own specific and unique challenges and fortunately, there is great support at the John Innes Centre, and across the Norwich Research Park for new and expectant parents.

For example, the ‘NBI Parent and Carers group’ are a fantastic support base. They have loads of information on the parental leave policies as well as arranging events such as coffee mornings and the Children’s Summer and Christmas Parties. There is also the Chestnut Nursery on-site which is not just good in terms of location, but also has a lovely environment.

Alongside that support, I am also employed on a Wellcome Trust grant which has provisions for parental leave in their contracts. I was entitled to my full salary for the first six months of my maternity leave and the Wellcome Trust supplemented the salary costs to the John Innes Centre. They also agreed to extend the grant to cover the time I was away on maternity leave.

Our daughter was an amazing Christmas present, arriving at 11pm on Christmas Eve. Just like that, my entire world changed.

On the whole, my maternity leave has been a wonderful period in my life. It has been a special time where I got to bond with my daughter and really get to know this new little person that has joined our family. I am so grateful for those months where I could focus on building my relationship with her and start learning how to be a parent.

However, before I went on maternity leave, I had a couple of naïve ideas about what it was going to be like. When I think back, I find both laughable.

First, I thought I would get bored. Despite the lack of mental stimulation, I didn’t once feel bored while on maternity leave. Looking after a tiny person is a full-time job and there is little room for much else. Especially when they are really tiny.

Pre-baby I believed that I would be able to read papers and keep up-to-date with the current scientific literature, maybe even write a paper, while my newborn baby napped. From what I had read, babies sleep between 14 and 18 hours a day. I thought this would give me ample time to read, write, clean etc. Boy was I wrong.

The first lesson I learnt was that there is no such thing as the average baby. Yes, my daughter slept loads after she was born, however, she was not content in the beginning unless she was asleep on me. I was also exhausted and could barely concentrate on anything other than keeping her (and myself) alive. As she got older, I was told she would settle into a pattern of sleeping for two or three one and a half to two-hour blocks during the day. Again, not my baby. She took four naps of 30 minutes.

The second thing I learnt was that babies are actually tiny people who change constantly. This means that like us, they have their good days and bad days. Days where they are hungrier, or more tired, or crankier or a combination of these. This also changes with each developmental stage. In other words, whenever you think you have a routine established, something will come along and change it. Yes, there were definitely weeks where I achieved a lot while she slept in-line with the routine I was setting. But, then there were other weeks where it all went to wrong.

I also thought that I would miss work. I believed that I had worked so hard to get to the point in my career, whereby I had my PhD and was embarking on Postdoc contracts, that research would maintain a place of priority in my life.

To some extent it has, but to be frank, I didn’t miss work while I was on maternity leave. Well, at least I didn’t feel like I was missing it; I couldn’t imagine being away from my tiny person. Even though there were days that were exceptionally trying and challenging, days where it felt like I was the worst mother known to man, I still wouldn’t have chosen to be anywhere else other than with her. In fact, I was quite nervous about my ‘Keep-In-Touch’ (KIT) days. I was nervous that I wouldn’t be able to remember anything in my subject area, or I would be completely brain dead and not be able to participate in discussions. There was also a small part of me that was scared that I would hate it.

Again, in hindsight, these concerns were all ridiculous; I had become a Mum, not had a frontal lobotomy.

My KIT days reminded me that I love my job and while at work on my KIT days, I realised that I had actually missed it after all. Despite it being really difficult to leave my daughter, I enjoyed the adult interaction and being able to do what I was trained to do.

Of course, as with everything, the support I received from my boss made all the difference. While I was on maternity leave, he made me feel welcome and included at work. I felt like my input was still valid and my opinions were still welcome, and he managed to do this without making me feel obliged to do anything. I am truly grateful to him for his unceasing support.

Apart from my husband and family, my NCT Mum’s group has also been a great source of support during my maternity leave and beyond. If I have one piece of advice for any expectant parent, I would say find yourself a group of parents with a baby of a similar age to yours. This group has been invaluable from having other people to talk about every day experiences that would probably bore everyone else, to having a lovely group of people that I could have coffee and a chat with. They help you realise that everything that you are going through is normal and that you aren’t going insane. They have also been a great emotional support as I came back to work.

I decided to return to work at the end of nine months of maternity leave. I had accrued enough leave that I have been able to return to work part-time initially, to see how condensing my hours permanently would work in practice.

I was equally excited and anxious about going back to work. I was incredibly sad that my maternity leave was over, and I was dreading leaving my daughter at nursery, but I was genuinely looking forward to getting back in the lab.

The first day back, it felt like I had never left, and it seemed so natural to be back. Though, it hasn’t been plain sailing, for example, getting both myself and my daughter ready in the morning and establishing new routines has been difficult at times. Moreover, my baby girl has had the inevitable colds and viral infections, but luckily for me this hasn’t been too disruptive as I am fortunate enough to have a husband that can work flexibly and my family live nearby.

Working part-time has been both great and challenging. I cherish my Fridays with my baby, but I also feel like I am trying to get a week’s worth of work done in four days, resulting in feeling more time pressured now than pre-baby.

Ultimately my priorities have changed. Now I prioritise getting home in the evening to be with our daughter at dinner time and bedtime, when in the past I would have happily stayed in the lab to finish experiments until gone 9pm. Alongside that, I’m getting better at planning my days so that I can get more done in the hours I am at work, but I am by no means there yet. Instead of just slotting into my life, this tiny person has become my number one priority and she has changed my views about what I want from my life.

I have also become more open to exploring other career paths that science offers, such as Science Communication, moving into industry or policy, because I am not sure that the unpredictable and uncertain nature of scientific research is right for me anymore. That being said, I am very gratefully to have a year to ponder that decision while continuing to enjoy the job I am currently doing.

Becoming a Mum has been the biggest challenge I have faced in my life so far, but it has also been the best decision I have made. I’ve found that talking to people who have had similar experiences has really helped me and I am always happy to chat to anyone about my experiences. With support from my family, workplace and colleagues I am excited about the future ahead as a scientist and as a Mum.