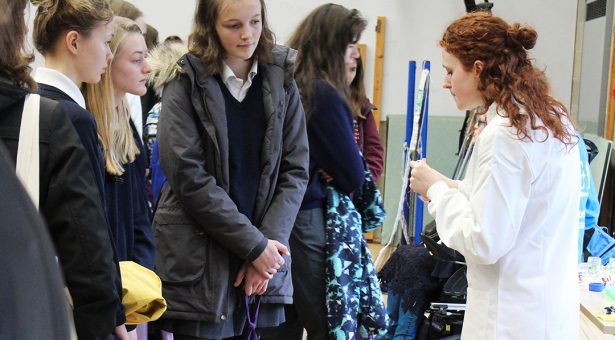 At the John Innes Centre we are proud to support women in science.

We are a centre of excellence in plant science and microbiology, where all scientists can thrive and produce groundbreaking research.

We have invited some of our female scientists to share their journeys.

Inspiring the next generation of female scientists

More women than ever are working in jobs related to science, technology, engineering and maths (STEM), according to recent UK government figures.

The picture from schools is mainly positive. At GCSE last year, there was a 3% increase in the proportion of girls taking science compared to 2014 and girls continue to outnumber boys in maths and science, with similar numbers of girls and boys taking biology, physics and chemistry.

What’s more, girls attain more A*-C grades than boys in all but three of the 16 STEM categories.At A-level girls continue to attain more A* and A grades in physics, maths, chemistry and biology. At degree level, the numbers look encouraging. Women made up the majority (51%) of all those who graduated with a STEM degree in 2015.Yet women still only hold 14% of STEM-related occupations.

A recent international report found that while education systems have made major strides to close gender gaps in student performance, girls and boys remain deeply divided in career choices, which are being made much earlier than commonly thought.

The report by the Organisation for Economic and Cooperative Development says that gender bias – conscious and unconscious – among parents, teachers and employers is partly responsible.

What’s needed, the report concludes, is a concerted effort by parents, teachers and employers to open women’s minds to their abilities and future careers.

As our Head of Directorate Carole Thomas told ‘Womanthology’ you can excel and be the best with a career in science.

In science, research is increasingly done by teams. Involving more women can enrich the creativity and insight of research groups. Women can look at problems differently, analysts say, and including more women in research will increase the range of innovations and breakthroughs.

Psychologists have also found that mixed groups do a better job of solving cognitive problems than single-sex groups.

One way we want to help inspire the female scientists of the future is to show the sheer diversity of possible careers, and how rewarding and exciting these careers can be.

Every year we host a Women of the Future Conference, where students from 20 local schools hear inspirational talks from high-profile women in science, and met role models at various stages of their careers.

Following the success of this conference, John Innes Centre alumna Samantha Fox and Principal of Flegg High School, Simon Fox, created the Youth STEMM Award (the extra M stands for medicine), initially for Norfolk schoolgirls aged 14-16. Functioning in a similar way to Duke of Edinburgh awards, but focused on demonstrating scientific capability, participants must complete a certain number of hours in four key areas, for example, by helping to run a science lesson for younger children.

The scheme allows students to interact with scientists and learn more about STEMM career opportunities.

At the John Innes Centre, we were the first Institute in the UK to win an Athena SWAN Gold award, which recognises commitment to advancing women’s careers in STEM.

We achieved this with a number of initiatives, for example, the John Innes Centre offers financial support to parents with child-care or dependant responsibilities who want to attend conferences and workshops; and to Group Leaders wanting to fund a postdoc or equivalent to cover one year’s absence due to adoption or parental leave.