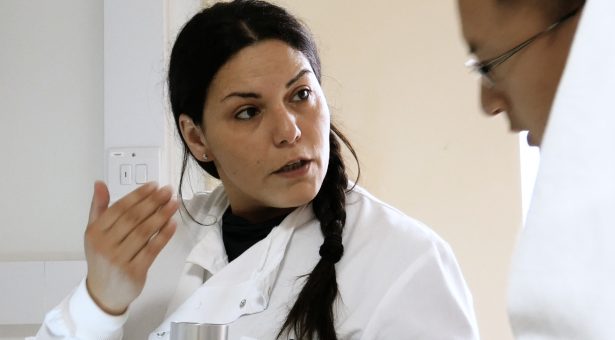 As we recruit the next generation of Group Leaders here at the John Innes Centre, we sat down with one of our most recent, Dr Laila Moubayidin.

We wanted to find out why she became a scientist and how she went from PhD to Postdoc and on to leading her own lab.

“I became a scientist because trying to discover how things work was something I have enjoyed since I was a child. I was constantly taking things apart and trying to put them back together and make them work again, although they didn’t always look exactly like they did before I started.

I have always been fascinated by nature and I decided early on in my life that I wanted to be a scientist.

I have been a Group Leader at the John Innes Centre for eight months, starting back in January 2019. Before I was a Group Leader, I had been a Postdoc here, since 2013. Before that I did my PhD and first PostDoc in the lab of Sabrina Sabatini at the Sapienza University of Rome.

Then last summer I was awarded a Royal Society University Research Fellowship, which allowed me to start my independent group at the John Innes Centre. When I was given that award, I felt like all the hard work I had put in had been worth it. I felt like I had won the Olympic Games in plant biology.

Like being an Olympic athlete, I would say that to be a Group Leader requires a lot of commitment, so you need to know within yourself if that is something you want to do. As with all career stages in science, you have to work hard, and you have to be committed to following where your research takes you.

As a Group Leader you take a lot of responsibility on your shoulders, including the careers of the people who will join you in your lab. You also need to feel that the area of science that you want to pursue is broad enough or has potential to expand and feed a lot of new hypotheses and different research paths.

Personally, I find mentoring young scientists very natural and satisfactory. I love that they arrive in the lab very excited, everything is new and everything is beautiful. They always see the good parts of being a scientist and the excitement of curiosity-driven discovery. It is a pleasure for me to deal with students.

You need a slightly different approach with mentoring Postdocs as they are already experienced scientists, so what you are focusing on here is passing on specific techniques within your research niche and combining their points of view, experience and passions with that of your group, to reach a common goal.

I currently have a Postdoc and a student on the International Undergraduate Summer School working in my lab. Later this year I will also be joined by two PhD students which I have recently recruited.

In my lab we work on organ symmetry establishment. We are trying to understand how plant organs, such as leaves, flowers and roots, decide and establish their symmetry type, e.g. radial and bilateral symmetry foundation.

The establishment of ground symmetry during organ formation is a paramount aspect of multi-cellular development since it is strictly connected to organ function, thus contributing to fitness and evolution of species. Ultimately, we want to reveal the mechanisms at the cellular, molecular and genetic level that underpin this astonishingly fundamental question in biology.

My favourite thing about being a Group Leader at the John Innes Centre is the freedom and possibility to pursue different areas of science. I feel completely free to pursue the areas of research that interest me, trying new things and deciding where to look next. Everything is in place here to allow you to realise the potential of your research and ultimately, allow the work we do here, to benefit society.

Being a scientist is not really about being in a white coat and following rules, although there is that element of it when you have to be very precise and attend to details, but the majority of curiosity-driven process starts in your brain. A scientist and an artist approach their work in the same way, through trying new ideas and thinking creatively.

The John Innes Centre is famous for its state-of-the-art facilities in microscopy, Nuclear Magnetic Resonance and many others, so being a Group Leader here is very exciting. You can really do anything you want. If your research suddenly takes an unexpected turn, here you have the facilities and colleagues all available to help you continue to progress. There is help and support everywhere you turn.

When I started the process of becoming a Group Leader I was supported and mentored through the process, which taught me a lot of things. I also had the opportunity to speak to other Group Leaders here about their experience, which really helped me prepare to make the transition from Postdoc to Group Leader.

At the John Innes Centre, junior Group Leaders and Independent Fellows like myself go through tenure-track, which provides a framework for you to go through and ultimately be get tenure. Tenure-track involves helping you build your lab, publish papers, build international collaborations and a research network and appropriately align your work with the globally strategic research goals the John Innes Centre is working towards.

One of the biggest aspects of a life in scientific research is how much you move from place to place and because I am originally from Rome the move from a big city to Norwich, apparently meant that I was going to find there was not as much on offer.

However, in my experience living in Norwich is lovely. The centre of the city is easy-to-reach and I have managed to do lots more things here in Norwich than I did when I was in Rome as everything is within a walking distance. There is so much to enjoy here, especially many independent shops, cafes, international restaurants, and different entertainments – it is pretty lovely.

The future holds a lot of exciting things for me and being at the John Innes Centre is extremely good for my future career prospects. I would encourage anyone thinking of applying to join us, to do so.