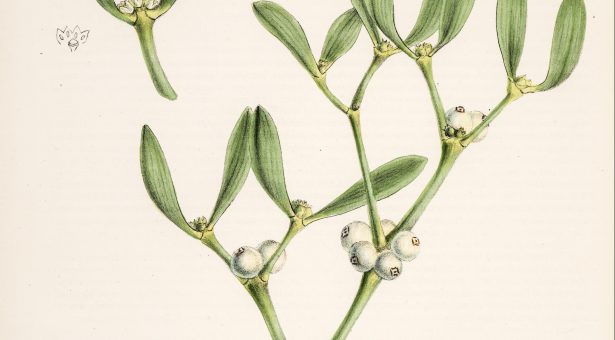 They found that mistletoe, uniquely among multicellular organisms, has dispensed with a piece of metabolic machinery that was thought to be indispensable.

So, for a fitting festive season blog we look back to the key questions behind the research, directed at Dr Andrew Maclean, lead author of the study and a former PhD student in the lab of Dr Janneke Balk at the John Innes Centre.

What was the motivation for your study?

My PhD research was on mitochondrial complex I, a large protein complex important for respiration. This involved studying mutants in the model plant species Arabidopsis thaliana that had low levels of this complex. Then we came across two papers which claimed that mistletoe, a plant that is a parasite on trees, possibly completely lacked complex I.

The authors had sequenced the small mitochondrial genome and found key genes needed for making complex I were missing.

This was unexpected, as no multicellular eukaryote has ever been described that had lost complex I.  However, even though these genes were missing from the small mitochondrial genome, they could have been transferred to the large nuclear genome, and so complex I could still be present. Therefore, we decided to collect mistletoe to look inside the mitochondria using biochemical and proteomic approaches to see if complex I had really been lost.

How was your study novel?

We then investigated all the proteins in mitochondria, known as the powerhouses of the cell. This is because they perform cellular respiration to produce ATP, the chemical energy that is used to fuel metabolism and growth

Interestingly, the protein complex that makes ATP is present at very low levels. So, it turns out that in mistletoe, the mitochondria function less as powerhouses of the cell. Instead, they have maintained their role in producing vitamins.

What is the significance of these findings?

Complex I is a very important enzyme which is involved in energy production in the cell. In humans complex I deficiency is a serious, but rare, heritable disease in that can lead to neurological and muscular problems. All multicellular organisms have complex I, or so we thought. Mistletoe is the first multicellular organism that has lost complex I.

The study is also significant because European mistletoe is surrounded by a number of myths and legends and has always attracted popular attention. It’s a Christmas decoration for people to kiss under, its main ingredient of the magic potion in the comic Asterix and its associated with Northern European folklore. The fascination for mistletoe could also be that it is an evergreen parasite and grows high up in trees and parasitism is a fascinating life history strategy.

What are the limitations of your study?

We don’t have a nuclear genome sequence for mistletoe, because the genome is very big making it hard to sequence. Therefore, we used the Arabidopsis sequence to try and match the protein data. This worked, but it has serious limitations. For example, we could only identify about 200 proteins with confidence, out of an estimated 2000 in the mitochondria.

Additionally, the life-cycle of Mistletoe is very complex. It is likely to have different metabolic needs throughout its life, for example, when it has just germinated compared to when it is acquiring nutrition from the host tree. Our study is just a snapshot of mistletoe’s metabolism. It would be interesting in the future to see how mistletoe’s metabolism changes over its lifespan.

Despite the large economic impact of parasitic plants, relatively little is known about their physiology. For example, mistletoes can cause damage to apple orchards, and the parasitic plant Striga, also known as Witchweed, is a serious problem for cereal crops like maize. We hope by studying these parasites, we will be better able to develop strategies to protect against them.

These findings are of interest from an evolutionary viewpoint. We had always thought that multicellular organisms needed complex I, that it would be needed to provide energy for a complex body. Clearly not.

What is your future plan for following up this study?

Mistletoe is the first, and so far only, multicellular organism found to have modified their mitochondria in such in extreme way.

If so there would then be a causal link between the loss of complex I some time back in evolution, and their parasitic lifestyle.