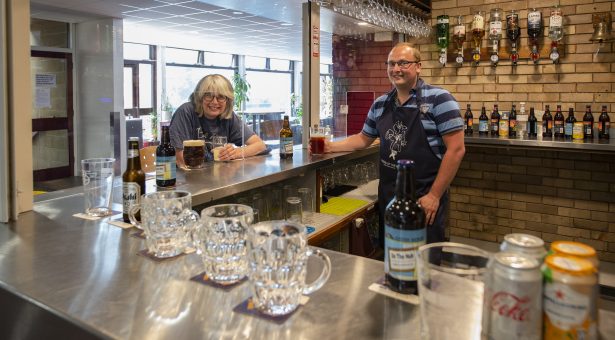 Cast your mind back to the day the John Innes Centre opened in Norwich 1967 and consider that life might have felt a bit isolated for the newcomers who took up posts in the site alongside Colney Lane.

There was no Norfolk and Norwich Hospital – then located in a city centre site – no Quadram and Earlham institutes, no Centrum and its meeting spaces and cafe.

But what did exist – no doubt to the relief of the early JIC pioneers in Norwich – was the John Innes Recreation Centre, a tucked away social hub which still functions today 50 plus years on.

Dr Anne Edwards is the part time manager of the “Rec Centre” a role she balances with life as a researcher. Working with a group of committed volunteers, Anne can see the value of social space offering a place away from the pressures of life and lab.

“In the early days, it must have felt quite remote, so hosting activities for the staff and their families was an integral part of the new centre, I’m sure,” she says. “In addition to events, there were outings to Kew Gardens, to Wimbledon, to bowling at the American air base at Lakenheath – if you didn’t have a car, it was a way of seeing different places for people newly arrived in Norfolk.

“The Rec Centre has been a social hub for a huge number of people who attended over the years. If you meet someone at a conference, they always remember the Rec Centre and the social life if they have worked at the John Innes Centre,” she adds.

Anne has been at the John Innes Centre 35 of the 55 years in Norwich, so she is personally and professionally qualified to look back at some of the highlights and lowlights – offering a social history snapshot.

“October used to be the big incomers party, the start date for all the PhD students, and everyone would go to the Rec Centre. It was a chance to meet everyone. It’s not so much the case now, people arrive all year round,” she says.

At such a gathering in 1987 Anne made her first social outing at the Rec Centre.

“I’d come from Wales – it was just my second visit to Norfolk apart from the interview – and at the gathering I was probably not alone in having a bit too much to drink before heading off home.”

“When we woke next morning to find Norfolk completely flattened by the Great Storm, we thought ‘what on earth has happened?’”

“I still can’t remember much about the party, but I remember this awful devastation. Most of the glasshouses were smashed, there were trees down along the river around the UEA and you could not get down Earlham Road. A little later I visited Yarmouth, and I remembered seeing all the caravans and fun fair completely flattened.”

Less tempestuous was the night of millennium eve. Earlier that day Anne had been summoned to reception to find two police officers. They were doing a tour of licensed premises in the area to make sure that nothing got out of hand and there was no likelihood of underage drinking.

“We assured them that this would perhaps be the only bar that was not going to be open in the area – we never open on a New Year.”

Even so plenty of people have partied like it’s 1999 down at the Rec Centre over the years, at birthdays, weddings, and celebrations of sporting events. With such a diverse mix of nationalities at the Norwich Research Park the football (soccer) world cup offers a special opportunity to shine.

“World Cup games stand out, with people all over the world supporting their teams. We had a beer for the country playing that night and various international culinary themes with students and researchers preparing food,” says Anne.

And finally, no treatment of the Rec Centre would be complete without mention of the swimming pool – for many people at the Norwich Research park – a wellbeing lifeline, a place they can splash with family and friends or shift the stresses of the day with a few lengths at lunchtime or after work.

The pool is part of a range of activities open to the people on site including boat and canoe hire, badminton, basketball, dance, and darts. There’s a snooker table and an area hired out for band practice.

“We have a wellbeing month in February, but the Rec Centre offers wellbeing all year round. You can take a break in the pool for half an hour or have a game of badminton. It’s nice to take a break,” says Anne.

For those partial to a locally sourced pint the Rec Centre offers its own range of John Innes Centre branded beers, the result of a link up with a Norfolk micro-brewery.

The Covid-19 lockdown highlighted the value of social and physical activities to our wellbeing and work-life balance. Following its closure, the re-opening of the centre has highlighted its value in the day-to-day life on the science park.

From being solely a John Innes Centre resource, the Rec remit has expanded to cover all those across the NRP (Norwich Research Park) institutes – and for certain events, their families. All institutes pay for the privilege of membership.

“Even so a lot of people may not know about the benefits of the Rec Centre. They might not know it even exists,” says Anne.

Today the Recreation Centre still lies at the heart of the site and runs a range of social activities available for the thousands of people who work on the site – and their families. Whatever the future holds for the expanding Norwich Research Park there will always be a small and important space reserved for this treasured bolt hole.