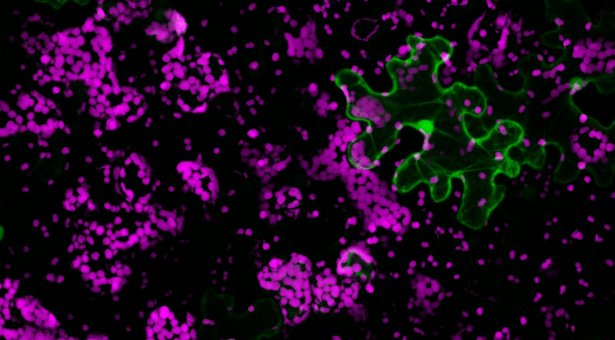 A round-up of recent research from the John Innes Centre; Summer 2017

Professor Tony Maxwell’s team are among an international consortium who have discovered a new class of compounds that target bacteria in a unique way.

The team, along with scientists from GlaxoSmithKline and Sanofi, reported that the new compounds inhibit a bacterial enzyme called DNA gyrase. DNA gyrase controls the winding and unwinding of DNA that is required for bacteria to replicate. Inhibiting DNA gyrase is lethal for bacteria, meaning it is an ideal target for antibiotics.

The new compounds have been shown to be effective against a number of drug-resistant bacteria strains in the laboratory. The collaborative research was facilitated by the ENABLE (European Gram-negative Antibacterial Engine) consortium, part of the EU-funded Innovative Medicines Initiative’s ‘New Drugs for Bad Bugs’ (ND4BB) programme.

Researchers from Professor Barrie Wilkinson’s group at the John Innes Centre and Professor Matt Hutchings’s group at the University of East Anglia have discovered a new antibiotic, called formicamycin, produced by a newly-discovered bacterium.

This new bacterium, found on the African fungus-growing plant-ant Tetraponera penzigi, is part of the Streptomyces genus and has been named Streptomyces formicae. Kenyan plant-ants live in symbiosis with thorny acacia trees. They live and breed in domatia – hollowed out structures which the plant evolved to house them – and grow fungus inside for food. In return, the ants protect the plants from large herbivores, including elephants. After isolating a number of bacterial strains from the ants and sequencing a selection of these, one particular strain caught the scientist’s attention.

Further investigation found it to be a new species, and the antibiotic compounds it produced showed promising activity in early tests against disease-causing bacteria. Lab tests have shown that formicamycin is effective against methicillin-resistant Staphylococcus aureus (MRSA) and vancomycin resistant Enterococcus (VRE), bacteria which are resistant to a number of common antibiotics and can cause life-threatening infections.

Scientists at the John Innes Centre, the Earlham Institute, The Sainsbury Laboratory and the European Bioinformatics Institute have completed the most accurate and complete DNA sequence analyses of the wheat genome to date.

This comprehensive resource is already helping breeding programmes worldwide by providing a framework for selecting lines with improved characteristics, such as yield and disease resistance, so wheat breeders can develop new superior wheat varieties faster than ever before.

Dr Cristobal Uauy, a Project Leader at John Innes Centre which co-leads the project said, “The methods developed by Earlham Institute and John Innes Centre scientists have enabled several important UK wheat varieties to be sequenced. Working with breeders, we are now using the DNA sequences to see how previous breeding shaped the genetic make-up of their best performing lines.

With this information, they will soon be able to accurately predict which lines to breed from, and to directly identify the most promising progeny. This could save years when making new varieties and accelerate the delivery of scientific discovery to farmers.”

New evidence that plant tissues have a sense of direction

New research from Dr Alexandra Rebocho and colleagues in Professor Enrico Coen’s lab suggests that plant tissues can have a preferred growth direction, and that this is an important component of complex plant shape development. This builds on the theory of ‘tissue conflict resolution’.

Genes program how tissues grow, but when adjoining tissues are programmed to grow in different ways a conflict occurs and the tissues deform to a compromise state. Through these interactions plants can develop highly complex shapes. There are three proposed types of tissue conflict: areal, surface and directional.

This development provides evidence for directional conflict where tissues can have a set of directions, or ‘polarity field’, caused by asymmetrical distribution of proteins within cells. Much like surface and areal conflicts, adjoining tissues with differing specified directions of growth will lead to conflicts. When combined, the resolution of the three types of conflict can produce vastly diverse and complex shapes.

This research moves us one step closer to understanding how genes can influence the remarkably intricate and beautiful plant shapes we see all around us.

A long-standing mystery of how and why colourful structures called ‘anthocyanic vacuolar inclusions’ (AVIs) occur in some plants has been solved.

The research was carried out by scientists in Professor Cathie Martin’s group, including first author Dr Kalyani Kallam, Dr Ingo Appelhagen, and collaborators from China, New Zealand and Norway. A colourful plant pigment, called anthocyanin, usually accumulates uniformly in plant vacuoles. However, previous research has noted that, in some plants, distinct dense clusters of anthocyanins can form within vacuoles. (Pictured far right: AVIs in delphinium) The team modified tobacco plants to produce the vacuole-soluble form of anthocyanins by introducing genes from the magenta-coloured snapdragon flower.

Dr Kalyani Kallam said, “By crossing this modified tobacco with tobacco that expresses proteins from plants that modify anthocyanins, we generated offspring that formed AVIs. Experimenting with different genes and conditions we could work out the chemical steps in forming AVIs. We also deduced that AVIs are not bound by a membrane, they are formed when anthocyanins precipitate out of solution in the vacuole, dependent upon pH.”

Professor Cathie Martin elaborates, “In many plants the formation of AVIs is most likely an unavoidable chemical behaviour of specific anthocyanins under certain conditions. However, in some plants AVIs may help to increase the intensity of pigmentation to help attract pollinators.”